Good Fights, Like Good Friendships, Are A Long-Term Promise

Monique Ocampo runs a series of interviews with Catholic women on Wednesdays and I’m her guest this week.  I’ve posted a snippet of our discussion below, but you can read the full Q&A at her place.

How do you balance working in news with apologetics?

Most of the time, there’s no balancing act at all — I don’t write apologetics at work; I cover statistics-heavy facets of the day’s news.  The biggest way that my faith impacts my writing is that I try to reflect on the effect my pieces will have on my readers.  I try to avoid writing anything that leaves the reader with a feeling of contempt or hatred, even if I’m discussing a tragedy that’s being treated callously.  I want to follow the Campsite Rule and leave my reader better than I found them, and not just in terms of new facts discovered!

You’re obviously not one who shies against politics and religion. What are some tips for having a good civil debate?

A good debate is one that you and your opponent expect won’t be solved in a single conversation.  It’s pretty hard for someone to find out that they’re wrong in a single argument (and it’s prudent to go home and reflect on what you heard before conceding completely).  So, in general, you should be playing a long game.  That often means I put less of my energy and attention into arguments I can’t stick with (drive by commenters, etc).  Starting a fight means starting a relationship — I can only take on so many!

If you’re trying to lay the foundation for future conversations, you need to make it as pleasant as possible for your opponent to fight with you — after all, you want them to invite you over again for a second round.  I try to do this by asking a lot of questions about whatever I’m genuinely curious about, making sure I really understand my opponent, rather than trying to box them in our first discussion.  I try to be honest about which parts of my argument I think are weaker, so my opponent can trust me to be truthful and so that it’s clear it’s worth their time to ask questions of me.

Read the rest at Monique’s blog… 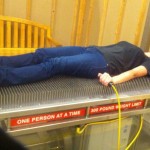 June 5, 2015 What I Read On My Book Tour
Recent Comments
0 | Leave a Comment
"Oh! And you can get there via Naval Gazing.(probably not by Navel Gazing...)"
TheSparksFlyUpward Too Sucky To Be True
"Hello, Deiseach!1. This is not an ad. (It always reassures me when someone says that!! ..."
TheSparksFlyUpward Too Sucky To Be True
""Do you honestly think that a child raised by a woman has no exposure to ..."
Zorin 2012 Queer Blogathon [Index Post]
"I'd love to see a video of how it works. keranique shampoo reviews"
Marlene Garza Welcome Camels with Hammers to Patheos!
Browse Our Archives
Follow Us!