Hamilton Is Blazingly Fast And I Can Prove It

Hamilton Is Blazingly Fast And I Can Prove It October 7, 2015 Leah Libresco

I got to combine my love of musicals and math nerdery when I covered Hamilton‘s lyrical density for FiveThirtyEight this week.

If “Hamilton” were sung at the pace of the other Broadway shows I looked at, it would take four to six hours (Miranda’s guestimate was off by half). At the slowest paces, “Hamilton” would only be an hour shorter than Elevator Repair Service’s seven-hour marathon play “Gatz” (in which the cast reads “The Great Gatsby” aloud in its entirety). That show is usually presented with two intermissions and a dinner break. 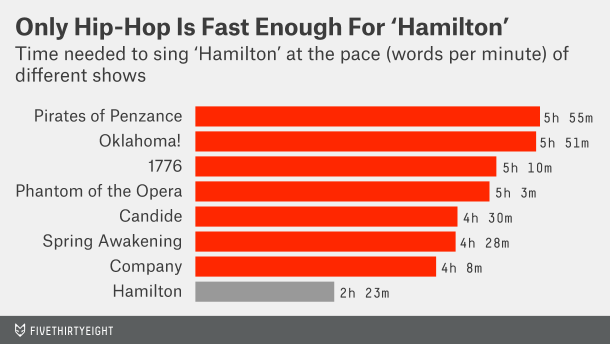 And then, not long after I put up the story, guess who spotted it:

This is delightful. And no one is surprised by my math being way off. I got into theater to avoid it. Thank you! https://t.co/GsWKhPT8MX

I got some fun followup questions in the comments and on twitter, too:

At FiveThirtyEight, one person asked:

I figure a stats site would compare their Kolmogorov complexity (eliminates anything redundant, boils it down to fewest expressions to make the same point).

And this was something I thought about, when I was deciding to measure.  Ultimately (aside from being really labor intensive), trimming repetitions is weird in musical theatre.  Sometimes, a repeated chorus feels like space-filling vamping, but often repetition conveys new information, because it’s inflected differently or because there’s a key change or simply because it intensifies the original verse.  (Think Joanne’s repeated “Rise!” at the end of “Ladies Who Lunch”)

One person had me test a hypothesis for them.

@_R_S_S_ @Lin_Manuel @HamiltonMusical Fun question! But it turns out they average pretty close to the same pic.twitter.com/MTJVj0pbwN 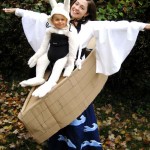 October 9, 2015 7QT: Breaking Bicycle, Weight, and Genre Rules
Recent Comments
0 | Leave a Comment
Browse Our Archives
get the latest from
Catholic
Sign up for our newsletter
POPULAR AT PATHEOS Catholic
1