Aunt Alberta And Being Right (but the boring way) 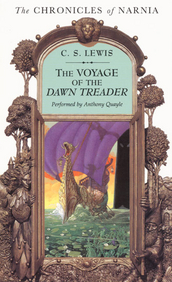 I’ve been rereading the Narnia series (in publication order) with a group of friends, and when we read The Voyage of the Dawn Treader last week, I was struck by how the transformation of the boy called Eustace Clarence Scrubb (who almost deserved it!) is summarized in the final words of the book.

Back in our own world everyone soon started saying how Eustace had improved, and how “You’d never know him for the same boy”: everyone except Aunt Alberta, who said he had become very commonplace and tiresome and it must have been the influence of those Pevensie children.

That reaction casts Aunt Alberta and her husband’s own oddities in a different light. Perhaps their vegetarianism, their habit of having their son call them by their first names, and all the other choices that Lewis ridicules are less a matter of their own philosophy than their desire to differentiate themselves from others.

The need to be distinct can be a matter of pride, of wanting to be sure that you’re better than others, and therefore needing a comparison you can win, but, in James K.A. Smith’s You Are What You Love, he identifies a different, better-intentioned way to wind up making Aunt Alberta’s error:

Sincerity and authenticity tend to generate a penchant for novelty. If I worship in order to show God how much I love him, I might start to feel hypocritical if I just keep doing the same thing over and over and over again. My expression will start to feel less “authentic.” And so we need to find new ways to worship, new ways to show our devotion, fresh new forms to express our praise. Novelty is how we try to maintain the fresh sincerity of worship that is fundamentally understood as expression.

When our inner Aunt Alberta makes us worry we’re being boring or commonplace, and we don’t have any other compelling critique to lay against our choices, I find it helpful to remember that there are two ways to be strikingly original: I can be a genius, or a crackpot.

Or, in less secular terms: a prophet or a heretic.

It makes it a little easier to take the pressure off myself to do something flashy, rather than something commonplace but good.

June 20, 2016
The Tony-Winning Guide To Temptation And Grace
Next Post

July 6, 2016 Why I'm a Statistician and Why I'm a Catholic
Recent Comments
0 | Leave a Comment
"On that note... I recommend every Catholic and Christian have that post a read. Click ..."
Oktavian Zamoyski Effective Altruism and Caritas [Radio Readings]
"I think too many people have grandiose and unnatural ideas about charity. It becomes a ..."
Oktavian Zamoyski Effective Altruism and Caritas [Radio Readings]
"Jesus wasn’t resurrected as a great miracle simply in order to convince people to believe ..."
John The Two-Lazarus Problem
"The cartoon is amusing, but flawed. One of the four virtues of Stoicism is Justice; ..."
Vulpes Inculta 7QT: Stoicism Man, Semi-Imaginary Money, and ..."
Browse Our Archives
Related posts from Unequally Yoked