Will Someone Please Tell Christians That the LGBT War Is Over?

On March 9, 1974, Hiroo Onoda, a Lieutenant in the Imperial Japanese Army, at the behest of his former commanding officer, turned over his sword and rifle and formally surrendered to authorities, thus ending his 30-year holdout in the Philippines where he had continued to fight in a war that he refused to believe was over. He was one of the last Japanese holdouts, soldiers who, due to poor communications or misguided loyalty, continued to fight for months and years after Japan’s surrender.

On June 26, 2015, the United States Supreme Court, in its decision on Obergefell v. Hodges, declared that same-sex marriage is legal in all 50 states. But Christians across the country refuse to accept the implications of that decision. Like the Japanese holdouts after Word War II, they continue to fight on, seemingly oblivious to the political, social and theological realities around them.

Here are a few excerpts (reproduced verbatim) from some of the emails received by the NALT Christians Project in just the last 3 days from Christians who have hunkered down in their theological bunkers and continue to take pot shots at anyone who poses a challenge to their beliefs:

While the bible does not mention homosexuality in the majority of scripture, the fact that is in mentioned and clearly defined as sin, is enough.

u err, and teach others to do the same. which makes u a liar.v

Actually, your wrong. You post lies out of context. What about these quotes STRAIGHT from the bible which, i’m sure you won’t be himest enough to share in your mistaken translation of God’s law..

God doesn’t change nor does his laws. His law clearly states no matter what human beings have called it male with male relationships are an abomination.

Homosexuality is wrong, it is a perversion of nature, and YES, the Bible DOES condemn homosexuality ! I don’t hate homosexuals, I have a friend that is homosexual but I have told him my stand on that issue, its wrong by any standard.

If being gay is ok in the sight of God, how come they can’t produce on their own? Thar makes them a hypocrite when they have to use someone else to help them reproduce instead of doing it on their own.  So how are you saying that Jesus didn’t say anything against homosexuality?

If you call yourself a Christian, then follow the God’s law and not man’s law.

It has been mentioned many times that this is a sin and for us to sit back and accept this in society is like Sodom and gamorrah. We need to step up in our faith and ignore what a man- made society has drilled into our heads and solely follow Christ.

Hello, you do know that God condemns homosexuality right? And if God condemns it his children are supposed to as well. God also says love not the things of this world and if you do that puts you at emnity with him either you’re with God or against him, but you can’t be both.

Here is what you are guilty of and will have to give an account of: The Bible is not silent about such decisions. Alongside its clearest explanation of the sin of homosexual intercourse (Romans 1:24–27) stands the indictment of the approval and institutionalization of it. … You are still living and breathing. You still have the opportunity to repent and follow the god of the bible, not the worldly god. I pray for your salvation

When society and the legal system move to legitimize adultry, stealing, killing, and the various other activities Scripture defines as sin, the outcry against it will be as equally as passionate.

THE TRUTH IS THAT GOD DOES HATE HOMOSEXUALITY NOT THE PERSON. WHAT YOU ARE DOING IS TELLING LIES IN A VERY DANGEROUS WAY. LIKE MOST ANTI CHRISTIANS YOU ARE SPINNING THIS IN A WAY THAT MAKES CHRISTIANS LOOK LIKE THE BAD GUY.

You need to get on your knees and repent. The Bible DOES  condemn homosexuality by stating that if a man lie with a man as with a woman it is an abomination. You will be held accountable for your false teaching.

You misguided liberal loonies can rationalize all you want, but you can’t call black white and vice versa … Just like scripture: “right will be called wrong and wrong will be called right.” The only good part it that HE must be coming soon…………..

LGBT Christians? Really? You guys must read a different Bible than I do.

Add to those troubling declarations the facts that 29 states don’t prohibit employment discrimination based on sexual orientation, 32 states don’t protect transgender people from being fired merely for being trans, and 28 states lack housing non-discrimination laws that protect LGBT people from being unfairly evicted, and it becomes abundantly clear that, though the war may be over, many, many battles still remain. 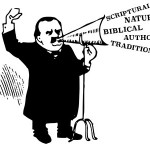 June 30, 2015 Breaking Down Southern Baptist Rhetoric Against Same-Sex Marriage
Recent Comments
0 | Leave a Comment
"6 Bible results for "be kind":2 Chronicles 10:7They replied, “If you will be kind to ..."
Jim Jones Seven ways Christians blow it
"Uh...no?"
Tiny J Seven ways Christians blow it
"GOd came to save us from eternal separation from God by dying on a cross?Do ..."
Bones Did Jesus speak more about Hell ..."
"Eternal separation from God"
SPH Did Jesus speak more about Hell ..."
Browse Our Archives
Follow Us!