The Punctuation Mark That Might Change How You Read Romans

The Punctuation Mark That Might Change How You Read Romans September 11, 2015 Dan Wilkinson

One of our all-time most viewed posts on the UC blog is Don Burrows’ Romans 1:26-27: A Clobber Passage That Should Lose Its Wallop. Drawing upon the work of Calvin Porter, Burrows argues that Romans 1:18-32 is best understood as “boilerplate, Hellenistic Jewish material that attacks the Gentiles.”

He goes on to cite Porter’s conclusion that “in 2:1-16, as well as through Romans as a whole, Paul, as part of his Gentile mission, challenges, argues against, and refutes both the content of the discourse and the practice of using such discourses. If that is the case then the ideas in Rom. 1.18-32 are not Paul’s. They are ideas which obstruct Paul’s Gentile mission theology and practice.”

In short, Romans 1:18-32 is a rhetorical passage representing the voice of Hellenistic Judaism, and Romans 2 is Paul’s voice arguing against that viewpoint.

It’s a powerful interpretation that challenges the conservative perspective on this passage and decisively undermines a key point in the anti-gay theological agenda.

But though I find Burrows’ (and Porter’s) arguments compelling, one point about their conclusion has always bothered me: our English Bibles don’t clearly support this interpretation.

Burrows rightly makes much of the use of the vocative in Romans 2:1 (ὦ ἄνθρωπε — “O man” — often translated “whoever you are”) as a signal that Paul is now addressing his interlocutor in the previous passage. But this subtlety is lost on modern English readers who aren’t familiar with the conventions of classical Greek rhetoric.

If it’s true that Romans 1:18-32 isn’t in fact Paul’s voice, shouldn’t our English text clearly reflect that? Why not add quotation marks around that passage to set it off from the rest of Paul’s letter? And, while we’re at it, why not add section headers that clarify the rhetorical interplay that’s taking place?

Instead of that section beginning:

For the wrath of God is revealed from heaven against all ungodliness and wickedness of those who by their wickedness suppress the truth.

it would be far more helpful for it to read:

Quotation of Jewish Rhetoric
“For the wrath of God is revealed from heaven against all ungodliness and wickedness of those who by their wickedness suppress the truth.”

Using the public domain Open English Bible, I’ve mocked-up how all of Romans 1:1-2:16 might be better presented (click to enlarge):

But adding quotation marks should be a far less controversial proposition. The Greek texts which we’re translating don’t have any punctuation, so every single period, comma, dash and quotation mark is already a later addition by translators. And the section headings that appear in most modern Bibles are an even more recent addition that vary widely from version to version.

The goal of biblical translation shouldn’t be to satisfy a theological agenda, nor should it be to preserve past interpretations when better options are available. Our English text of the Bible — including its punctuation — should convey the thoughts of the original authors in the most straightforward manner possible. The changes I’ve proposed to Romans 1 and 2 are at least as plausible as what appears in most of our current translations, and would go a long way toward clarifying this contentious text. 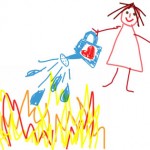 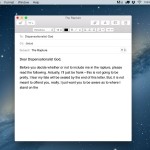 September 14, 2015 Dear Dispensationalist God
Recent Comments
0 | Leave a Comment
"6 Bible results for "be kind":2 Chronicles 10:7They replied, “If you will be kind to ..."
Jim E Jones Seven ways Christians blow it
"Uh...no?"
Tiny J Seven ways Christians blow it
"GOd came to save us from eternal separation from God by dying on a cross?Do ..."
Bones Did Jesus speak more about Hell ..."
"Eternal separation from God"
SPH Did Jesus speak more about Hell ..."
Browse Our Archives
get the latest from
Progressive Christian
Sign up for our newsletter
POPULAR AT PATHEOS Progressive Christian
1