Towards a Child Liberation Theology

“The most significant challenge before us is to recapture in our own particular contexts the radicalness of Jesus’ teaching on children. Children are not only subordinate but sharers with adults in the life of faith; they are not only to be formed but to be imitated; they are not only ignorant but capable of receiving spiritual insight; they are not ‘just’ children but representatives of Christ. What makes that challenge so difficult is that it would entail changing not only how adults relate to children but how we conceive of our social world. Jesus did not just teach how to make an adult world kinder and more just for children; he taught the arrival of a social world in part defined by and organized around children. He cast judgment on the adult world because it is not the child’s world. He made being a disciple dependent on inhabiting this ‘small world.’ He invited the children to come to him not so that he might initiate them into the adult world but so that they might receive what is properly theirs — the reign of God.”

Child liberation theology begins with the Child: the Child named Jesus who was and is the incarnation of the Christian God.

The God of Christianity chose to reveal Themselves not merely through a human being, but through a human being conceived in a human womb, brought forth onto earth from a human vagina, and beginning life as all children do — a vulnerable, naked infant screaming with confusion and shock. We often marvel that God chose to “lower” Themselves to the position of a human being, but less frequently do we marvel that this “lowering” was to the lowest version of the human being possible in historical context: a child, born without rights, subject to the anti-child attitudes of Greco-Roman antiquity, during a time when children were soon to be subject to the Massacre of the Innocents, King Herod’s government-led terrorism against and genocide of children. God, who created all human beings with the majesty and power of Their own image, reduced Themselves to the one version of humanity least recognized as being made in that image.

Child liberation theology thus begins with the Child that is Jesus and the children of all histories and locations who bear God’s image. And it places these children at the center of religious texts. It asks us to consider religious texts from the vantage point of those children — from the vantage point of Jesus as the God Child and all children as God images. Thus we must read our texts from the interpretive lens of these children. Children become the point from which all our exegesis and praxis must begin and end.

While various manifestations of Christian theology have been used for centuries to justify the abuse of children, there are many others that can help us invert abuse-laden interpretations and find places of apocalypse that signify the liberation found in Jesus of Nazareth. Thus child liberation theology will not whitewash, diminish, or excuse the fact that Christianity can be used to oppress children. However, it will dedicate itself to also finding ways in which Christianity can liberate them.

And liberate it can. Jesus the God Child did more than welcome children into his midst. He welcomed children into the very center of his praxis. He raised up children from the margins and said to welcome him, one must welcome them. In the same way child liberation theology must free children from the margins of our orthodoxies and orthopraxies and place children at those systems’ very centers. We must see Jesus’s call to welcome children in a way that radically destabilizes those systems. By placing children at the centers of our orthodoxies and orthopraxies, we can reimagine world power structures in a way that liberates those children.

Reimagining world power structures requires an understanding of intersectionality. Because if the liberation of children is to be truly liberating, it must liberate not only the middle class, cisgender, heterosexual, white male child of suburban America. Certainly the suburban white American child is made in the image of God. Yet the image of that particular child is not the defining image of childhood, nor is it in any way superior to any other image of childhood. The image of God as Child — as seen through Jesus the God Child — is an image extending to and embracing every single child everywhere. Thus the liberation of children must also extend to and embrace every single child everywhere.

1) What is full theological significance of Jesus identifying himself not simply as God the Human but rather God the Child, the Son of God? What does it mean that “the Father judges no one, but He has given all judgment to the Son,” the Child (John 5:22)? How ought that invert and/or transform our concepts of eternal justice as well as social justice? What does it mean that our concepts of justice should derive from the justice in the heart of a child, the God Child?

2) If God takes on and identifies with the suffering of the world, as other liberation theologies contend, what does it mean for God to take on and identify with the suffering of children? Is there a quintessential symbol of child oppression in the United States? What would it mean for our Christology if the image of an African-American child, forgotten and abandoned in America’s racist child welfare system, or the image of a homeschooled child, abused and isolated and daily raped by her very own parents, are to be the images of Jesus on the Cross for children today?

3) How have our theological concepts been grounded in adultism — the viewing of theological concepts from the vantage point of adults rather than the vantage point of children? When we think of sin, for example, are we thinking in adultist terms that exclude children? Are we thinking of sin as something bad a human consciously choosesover and against something good? If so, how does that make sense of infants who have yet to develop the skills of conscious decision-making? Or when we think of salvation, do we — in adultist fashion — envision it in a way that makes it impossible for children to participate in it? Do our theologies of salvation condemn to hell all unborn children, infants, and young adolescents? Such concepts of sin and salvation, therefore, are adultist and marginalize children from the sphere of being truly human (in other words, truly and fully made in the image of God). And becoming more self-reflective, do our current concepts of what is proper liberation theology have a place for — and make room for — children? Or do our “liberation” theologies and praxes exclude children in adultist ways? Do we make room in our churches and faith communities for children to participate in — and be equally transformed by — liberation?

4) How has adultism pervaded our other, non-faith communities, including our ethical, social, political, and philosophical spheres? In the same way that faith communities ought to fight against classism, racism, sexism, homophobia, and transphobia in these other spheres, how can faith communities work together to dismantle systematic prejudice and discrimination against children not only within, but also without, the church?

5) How have other liberating practices and theologies perhaps missed the mark when it comes to children? For example, has feminism — in its rightful and just liberation of women from being confined to the status of wife and/or mother — neglected to be prophetic against pedophobia and adultcentrism? Are we as dedicated to the practical support of women with children as we are to philosophical critiques of patriarchy? Are we responsible for the meteoric rise of popular conservative evangelical “child training” materials due to an absence of progressive voices offering concrete help for families? Do we liberate the woman without child at the expense of the woman with child? And if so, how can we work together to liberate not only women but also children?

6) How have our theological concepts been grounded in a child/adult binary — namely, that childhood and adulthood are two separate stages, the former of which involves being less than fully human and the latter of which implies full humanity? Do we take too literally the idea that we must “put away childish things” as if childhood is a necessary but unfortunate stage of life — a stage one must overcome in order to start “really living”?

7) How do we elevate the voices of children themselves? And how do we learn to — and encourage others to — engage those voices as more than simply “childish” beliefs or thoughts? Do we take seriously the biblical narrative in the Gospel of Matthew that it was unruly children, not the educated adults, who first recognized Jesus as who he was and unabashedly began “crying out in the temple, ‘Hosanna to the Son of David!’” (Matthew 21:15)? And do we grasp the full implication of Jesus’s affirmation of the Psalmist’s declaration that “From the lips of children and infants you, Lord, have called forth your praise” (Matthew 21:16)? Or do we dismissively and patronizingly pat children on the head and say their ideas are simply cute or funny, rather than apocalyptic, prophetic, and transformative?

These are but a few of the many questions to which child liberation theology must seek answers. As we pursue the answers, we must constantly remember that it is through God the Child — as well as all the children of the world — that we must be viewing the world. Only through the lens of children can we truly understand as well as hear and see from them how we can be participants in their liberation.

“We say that ‘childish’ is not the same as ‘childlike,’ the one undesirable, the other desirable. This is an expression of contempt for the child’s point of view. We say, ‘Don’t be a child!’ Jesus tells us the opposite: Be a child! Be the child you were and still are, the child-self who is still alive in you.” 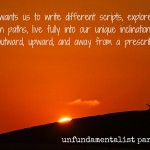 April 4, 2016
Does God have a Perfect Plan for your Child?
Next Post 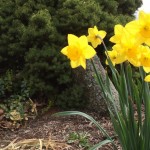