“Our Father, who art in heaven…” This phrase is repeated countless times in countless churches across the globe. This coming Sunday, with celebration of Father’s Day on the minds of many, that line will be said with invigorated significance. 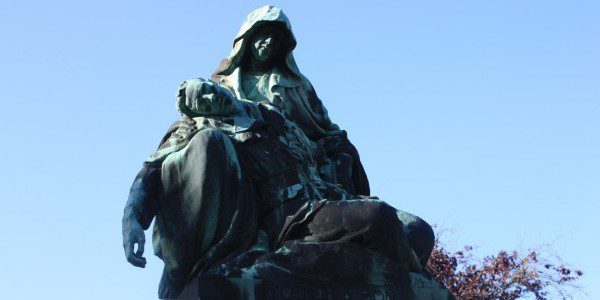 By Stephencdickson (Own work)[CC BY-SA 4.0 via Wikimedia Commons

But when we call God,”Father,” what do we really mean?

Theologian Jürgen Moltmann, in an article called, The Motherly Father, (see reference below for the fancy subtitle) argues that the only way Christians should read “Father” literally (and not metaphorically) is in the context of a theology of the trinity.

When “Father” is used as a reference to God in the Old Testament (which is actually quite rare), it functions as a synonym for “Lord.” The Father-Lord reference comes right out of a patriarchal context which will, he suggests, be revised by Jesus in the gospels and will shift toward a less patriarchal, less hierarchical, more egalitarian (equality) view of God and of God’s relation to us.

Whoever wants to understand the trinitarian concept of God as Father must forget the ideas of the patriarchal Father-religion and focus [their] attention on the life and message of of the first-born brother, Jesus Christ. The name ‘Father’ is a theological and indeed trinitarian name, not some general religious, political, or cosmological notion.

God as creator lends itself more to “Lord” reference than to “Father” reference, whereas the meaning of Father is more evident in relation to God’s generation of and relationship to Jesus, the Son. In other words, Father-reference makes more sense in the context of trinitarian theology than in creation theology, apart from trinitarian understanding.

It is only in his relationship with his Son that God can literally be called ‘Father.’ Therefore belief in God the Father starts from recognition of the Son, not from God’s omnipotence and creation…The doctrine of the Trinity does not deify Christ but ‘christifies’ God, because it pulls the Father into the life-story of the Son.

If the Son comes forth from the Father alone, then this coming forth must be thought of as both ‘procreation’ and ‘birth.’ But that means that there must be a fundamental change in the father-concept. A father who both begets and gives birth to his son is no mere male father. He is a motherly father. He can no longer be defined as single-sexed and male, but becomes bisexual or transexual. He is the motherly Father of his only-born Son, and at the same time the fatherly Father of his only-begotten Son.

It’s odd that Moltmann doesn’t mention Mary’s role in the birth of Jesus here, which does seem like a startling omission, but that omission is largely because his focus is on the Son of God from all eternity (the “second person of the Trinity”) who proceeds from the Father. He goes on to explain,

It was at this very point that the orthodox dogmatic tradition made its most daring affirmations. According to the Council of Toledo of 675 ‘we must believe that the Son was not made out of nothing, nor out of some substance or other, but from the womb of the Father (de utero Patris), that is that he was begotten or born (genitus vel natus) from the Father’s own being.’ Whatever this declaration may be supposed to be saying about the gynaecology of the Father, these bisexual affirmations imply a radical denial of patriarchal monotheism. Monotheism was and is the religion of the patriarchalism just as we may suppose, pantheism (‘Mother Earth’) was the religion of the earlier matriarchalism.

The Christian doctrine of the Trinity, with its affirmations about the motherly Father, represents a first step toward limiting the use of masculine terminology to express the idea of God, without, however, changing over to matriarchal conceptions. It really points to a fellowship of women and men in which there is no subordination and no privilege. In fellowship with the First-born, there are ‘no more distinctions between…male and female, but all are one’, and together heirs of the promise (Gal. 3.28, 29). Only a human fellowship free from sexism and class rule can become like the triune God.

June 17, 2016 An Important Answer to the Question, "Why Are Conservative Christians Being Blamed?"
Recent Comments
0 | Leave a Comment
Browse Our Archives
get the latest from
Unsystematic Theology
Sign up for our newsletter
POPULAR AT PATHEOS Progressive Christian
1