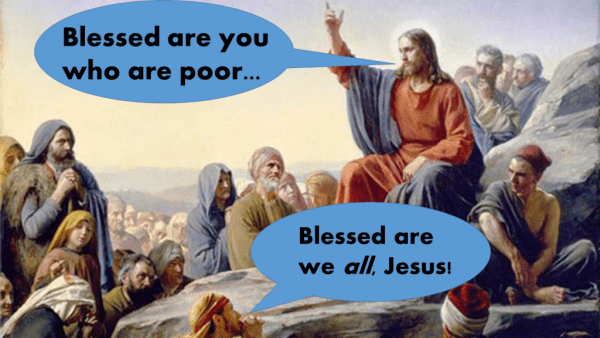 In a recent blog post, he reflects on the relevant Luke passage, which comes in the oft-dubbed “Sermon on the Plain.”

In that passage, Jesus says, “Blessed are you who are poor, for yours is the kingdom of God” (Luke 6:20, NRSV).

Many interpreters, particularly those of us who aren’t actually poor, like to suggest that what Jesus really means by poor is humble, or meek, or “spiritually desperate for God.” Jesus loves everybody, Jesus wants to bless everyone, so why would he single out out the economically poor for some kind of special blessing?

And besides, you don’t have to do anything to be poor, right? So why would Jesus reward poverty?

In the “Beatitudes,” of Matthew, things get even better–at first glance–for those who like to read “poor” as something other than actual poverty.

There, Jesus says, “Blessed are the poor in spirit, for theirs is the kingdom of heaven” (Matt 5:20, NRSV).

Ah, there we go. There’s the key! Poor means “poor in spirit,” and we can all be that–even the wealthiest of us!

Not so fast, though.

In Jesus the Liberator, theologian Jon Sobrino argues that the poor (even the “poor in spirit” of Matthew) cannot be equated to what he calls the “metaphysically poor.” Sobrino insists we ought not “spiritualize” Jesus’s message, making it applicable in the same way to everyone (rich or poor) and making it about eternal rewards in heaven as opposed to prophetic, challenging speech for the present age.

NT scholar Jeannine Brown and I are completing (finally) a commentary on Matthew. In our section, “Reading the Beatitudes Together,” she points to two Old Testament texts which are alluded to in this Beatitude:

He has sent me to bring good news to the poor,
To bind up the brokenhearted” (Isa 61:1)

“The Lord is near to the brokenhearted,
and saves the crushed in spirit” (Ps. 34:18)

In the OT and in the gospels (as in life in general) literal, economic poverty often (though not always) goes hand-in-hand with the feeling of being “crushed in spirit,” or “brokenhearted.”

But there is another kind of poverty that may not involve economic hardship, but still very much is linked to being crushed in spirit and brokenhearted. Sobrino calls this second category the “sociological poor”; these include people who are marginalized and oppressed, rendered vulnerable and given over to all sorts of hardships for reasons not of their own making. They are deprived the basic dignities which should be accorded all human beings–and it their spirits are often crushed, they are often brokenhearted, as a result.

The point is that when Jesus is talking about the poor, he is really talking about the poor of society who are broken-hearted and crushed by the way they are treated. He had no problem targeting his message of hope toward those who find themselves crushed in spirit by the unjust systems of society. And he calls his disciples to work at dismantling those systems.

Blessed are you when people revile you and persecute you and utter all kinds of evil against you falsely on my account. 12 Rejoice and be glad, for your reward is great in heaven, for in the same way they persecuted the prophets who were before you. (Matt 5:9-12)

In short, I’d say that McGrath’s way of framing the issue: Jesus vs. #AllLivesMatter is spot-on.

July 8, 2016
My White Privilege: A Brief Reflection in a Difficult Time
Next Post 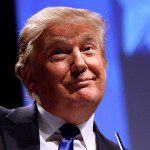 10 Signs You're Actually Following TRUMPianity...
The Official Blog of Benjamin L. Corey
Books by This Author Books by Kyle Roberts 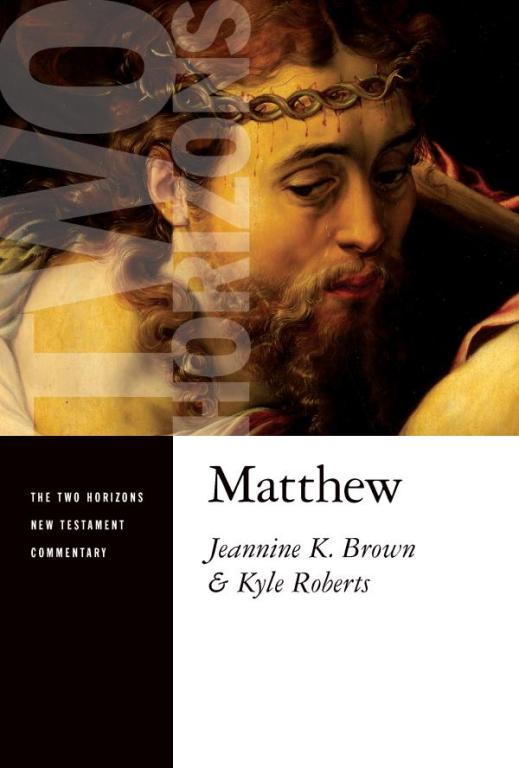