Bestower of Wealth,
Queen of the Gods,
Speaker of Wisdom,
Omnipotent Lady,

Agathe Tyche, greatly renowned Isis …
through you, Heaven and Earth have their being;
and the gusts of winds and the sun with its sweet light …
All who live on the boundless earth …
invoke  your fair name, honored among all …
Syrians honor you as Astarte, Artemis, Nanaia;
Lycians as Leto, the Lady;
Thracians name you Mother of the Gods;
and the Greeks Hera of the Great Throne, Aphrodite,
noble Hestia, Rhea and Demeter.
But the Egyptians call you ‘The Goddess’;
for you are all other goddesses invoked by humankind.

–Isidorus, ca. 100 BCE. Adapted from Vera Frederika Vanderlip (1972) in The Four Greek Hymns of Isidorus and The Cult of Isis. Toronto: Hakkert.

This is part of a famous hymn to the goddess Isis, written a little over two thousand years ago by a Pagan Greek priest called Isidorus. It was found on the walls of a temple excavated by a team of Italian archaeologists in the 1930s at the village of Medinet Madi in Egypt.

The worship of Isis originated in ancient Egypt and stretched from the Mediterranean coast of North Africa to Sudan, Ethiopia and beyond. There were many festivals for Isis, but one time when we might particularly want to think about her is in high summer. In the northern hemisphere, we are now in the ‘Dog Days’, which are usually the hottest days of the year – July  through to mid-August – when our sun and the star Sirius are in conjunction and rise and set at about the same time. Sirius is found in the constellation Canis Major or the Great Dog – hence the ‘Dog Days’; but Sirius has been long associated not with dogs, but with the goddess Isis.

Isis is honored today by goddess worshippers. The Fellowship of Isis is a worldwide movement that has helped revive her worship and she is also found in Wicca. For those of us whose spiritual path has included initiatory Wicca, one of the first things that we hear when initiated is the beautiful ritual text of the Great Mother Charge. In this, we are told to ‘Listen to the words of the Great Mother, who was of old also called among men Isis, Astarte … and by many other names.’

The Wiccan Charge conveys that the Goddess is immanent – we find her in the natural world around us, but she is also transcendent. She is Goddess of earth and moon, but also of star. ‘Hear ye the words of the Star Goddess,’ says the Charge, ‘whose body encircleth  the universe.’  This text, put together by Doreen Valiente (1922- 1999), draws on sources as diverse as Lucius Apuleius, who two thousand years ago became an initiate of Isis; on Charles Leland’s translation of The Gospel of the Witches, an Italian collection of witch lore, and on the writings of Aleister Crowley.

The Charge is a powerful text that draws many people to Wicca. It invokes the Goddess of star and heaven who can remind us of aspiration, of that human longing to reach for what is beyond the confines of our individual lives, fixed in time and space. Transcendence is sometimes thought of as being the monopoly of the monotheisms but Paganism ,while respecting what is of the body, also reaches out to that which takes us beyond the confines of self.

For many millennia, Isis was a Goddess of the ancient Egyptians, who poised between the Mediterranean Sea and the heartland of Africa, bridge European and African culture. Then, just over two thousand years ago, the worship of Isis migrated around the Mediterranean into the Greek world and then to Rome and across the Roman Empire, even as far west as Britain. As her worship moved beyond the confines of Egypt, Isis absorbed the qualities and attributes of the other great goddesses of the Mediterranean world and beyond. She became Isis of the many names and many attributes –  Isis Queen of Heaven, Star of the Sea, Isis Fortuna, Isis Minerva, and many other titles besides.

Isis has much to offer contemporary Pagans. Isis in the classical Pagan world was a multicultural Goddess, worshipped in Africa, Asia Minor and Europe, and peoples far apart in culture could find meaning in her. Today, as in earlier Pagan societies, Isis can bring together those of different races and faiths. The Goddess as Queen of Heaven is not associated with a particular place, time or culture. The arc of heaven unites all beings – human, animal, plant, and all life forms within the universe. She can also be a bridge to those of other faiths.  Many of Isis’ titles were absorbed into the veneration by Catholics of the Virgin Mary and her image survived into Catholic Europe in the form of Black Madonna statues, with cults of healing that were some of the most powerful pilgrimage sites of medieval Europe.  The worship of Isis has been hidden, but has never truly died.

Let us honor Isis in the Dog Days of the year, a  Goddess for the world in which we now live, a global interconnected village united under the vault of the Heaven’s Queen.

You sit enthroned within the caverns of my mind,
but your throne is empty;
no image will I fashion to grace its seat;
all images are limitation,
and thou, my belovèd, art infinite beyond all vision.

Hail to thee Great Mother,
whose robe is the universe,
whose sequins are the stars.

In the cold places of the night,
I dream of your Great Halls –
three columns of black marble,
by the pool of the sleeping lotus,
white petals on dark water.

Where breath turns to mist,
and silence rings with sound,
beyond the sound of harp strings,
where the voice no longer echoes,
and vision can only struggle and fail,
to comprehend your being,
I hear you calling and I come.

Across the abyss, below which is nothingness –
only the empty sighing of the wind;
I cross the shaking rope-bridge which spans the endless chasm;
I hear you calling and I come.

I come with a heart free of longing or desire,
I come to the place of the column of blue-white-light-fire.

No words now come, or thought, or feeling.
In the reality of thy presence all is as nothing.
My being fades, the blue-white consumes,
I-We are One,
are One,
are One.

Read this column in Spanish, Polish, or Italian! 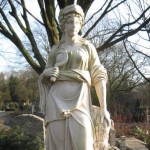 August 23, 2013 Our Lady of the Harvest
Recent Comments
0 | Leave a Comment
Browse Our Archives
Related posts from Greening the Spirit