The Chariot and the Sun in Its Height

The Chariot and the Sun in Its Height June 21, 2013 Vivianne Crowley

The need for mythic statements is satisfied when we frame a view of the world which adequately explains the meaning of human existence in the cosmos, a view which springs from our psychic wholeness.

Our ancestors as they awoke to consciousness sought to honor and reverence the powers in nature that sustained human life. Summer solstice, when the sun is at its strongest, became a time of celebration of the life-giving sun that returned each year to bring growth and warmth to the land.

The Chariot and Strength

Summer Solstice is the time when the sun moves astrologically into the zodiac sign of Cancer; the sign associated in the western mystery tradition with the tarot card of The Chariot. The Chariot shows the Midsummer King as war leader. The Waite tarot emphasizes the Charioteer’s protective role. The king stands in his chariot in front of a city; as though defending it from attack. The imagery echoes the myths of the sun god, who is first a magical child, then a young hero, and finally a wise king. The seasonal cycle echoes for us the cycle of human life. The cycle from Yule through to Midsummer, represents the human journey from childhood, through youth and strength, to mid-life; when hopefully we have begun to find our powers of leadership and wisdom, kingship within ourselves.

The sun in some Pagan mythologies is associated with male deities, such as Ra of the Egyptian pharaohs; but in northern Europe and in many other cultures the sun was a Goddess. The imagery of the sun belongs as much to a mature woman as a mature man. The female solar tarot card is that of Strength, a card associated with the sign of Leo. Strength shows a woman at ease with her power, holding open the mouth of the lion. The Charioteer has his horses; she has a lion. Both show human images in touch with the physical world and having the potential to control it.

The Sun in its height

The solar cards of the tarot are important because they convey messages about spiritual maturity. They are images of being in command, of being the solar king and solar queen. Midsummer as a festival of the solar king and solar queen represents a zenith, a celebration of majesty and strength. But what reaches the heights must then decline. Midsummer is often celebrated as a battle between the summer and winter kings. The summer king appears victorious, but the victory is at a price – a fatal wound that cannot be healed and leads to death. Our external achievements also come at a price. We achieve, but in time the energy put into that achieving drains us and inevitably at some point our powers begin to decline. Summer solstice is a celebration, but at the same time a recognition that once the brief days of the standing still of the sun have passed, then the frailty of life, the impermanence of all things, begins to assert itself.

Charioteer, not the chariot

The Chariot is a vehicle and in esoteric psychology it can symbolize the body and personality that we build up in this particular incarnation. These have a feeling of permanence, but there is no permanence in the manifest universe – only creation, growth, atrophy, disintegration and creation once more, eons of ceaseless change. The Pagan cycle of seasonal festivals honors the cycle of growth and change in the natural environment, the world around us. But in honoring that cycle, we also learn to accept the truth of that cycle in our own lives.

It is easy to think when we are busy immersed in everyday life that our individuality as it is now is something that is enduring and unchanging. It is true that there is deep within us an enduring core and seed that we can call ‘the self’ or ‘True Self’; but it is a seed that can flourish in many shapes and forms. What may feel like enduring characteristics – our gender, race, sexual orientation – are part of the vehicle; but they are not the self. The chariot is not the charioteer. Much of our spiritual growth is about letting go of the images that we have created and had thrust upon us by others. Spiritual growth is an unveiling, a stripping away of all the outer layers of conditioning that family and society have laid upon us to become the essence of ourselves; that which we are when we can be transparent and clear, without pretension or pretense, spiritually naked.

The Sun of the Self

The Sun is one of the many archetypal images of the True Self; a centre of the psyche, around which the personality that we have built up in this incarnation can revolve. In our spiritual and physical life journey, the season of Midsummer symbolizes the mid-point of life. The first half of life is about establishing ourselves as independent adults, who others then look to for guidance, help and support. We take on responsibilities – of paid work, parenthood, community and spiritual leadership – and through learning to play these roles, we grow and develop who and what we are. In the first half of life, we grow by engaging with the world. The second half of life has a different purpose, which is to connect to the deeper and wiser part of us that is the True Self. As we connect with the self, we find that we can let go of the need for external affirmation. We find our sources of strength, deep within ourselves.

The Summer Solstice is a point in the cycle when we can weave into our celebrations time and space to honor the seed of the True Self within us, which is part of and not apart from the Gods. The Solstice is a time when we can renew our spiritual quest to journey to the source of our being to that place and space where we and they are interwoven into the fabric of the ever-becoming universe, where we and the Gods are at one.

Dawn prayer to the Ra

Hail, Ra, in your rising,
you come forth and bring day, O Glorious Sun.
Your dawning brings light to heart and to mind.
May our hearts be your dwelling place;
let your deep silence enter into us,
so the noises of the world are lost.
Kindle with your rays the flame of love and
the powers within us;
fill the temple of our hearts with joy.

A recording of a radio interview with Vivianne Crowley speaking about the Summer Solstice can be found at An Organic Conversation: http://www.anorganicconversation.com/3290/when-the-sun-stands-still/ 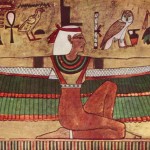 July 19, 2013 Isis: A Multi-Cultural Goddess
Recent Comments
0 | Leave a Comment
Browse Our Archives
get the latest from
Pagan
Sign up for our newsletter
POPULAR AT PATHEOS Pagan
1

Building For A Future We Won’t...
John Beckett
Related posts from Greening the Spirit