January is the month of the Roman god Janus, god of doors and gateways, of entrances and exits. Even if we celebrate a different date for the beginning of our sacred year, January 1st as the beginning of the secular year is a time when we look forward and back. Janus was a god with two faces, one turned to the past and one to the future. It is natural at this time to reflect on what has been and what we hope for in the year to come.

For many of us 2015 was a year of deaths; sometimes of those close to us, sometimes of those killed in terror and violence. I thought the death theme would culminate for me in November in Ireland, with visits to the graves of my grandparents, aunts, and that of Olivia-Durdin Robertson (1919-2013) of the Fellowship of Isis. Sadly, that was not to be so. On Christmas Eve came the news of a sudden family death and then on Christmas Day the sad news of the death of a friend of over forty years, Jean Morton-Williams (1928-2015), High Priestess of the Bricket Wood coven, established by Gerald Gardner, ritual magician, author, and for many years Secretary and then President of The Pagan Federation.

Both Olivia and Jean were elderly when they died. Olivia was 96 and Jean 87. Having lived so long, it might seem that theirs were lives that had been fully lived. Indeed, both women lived spiritually rich lives full of dedication and work for the Goddess. They both spent decades as ritual priestesses, but also as authors, and as leaders and administrators of important spiritual groups. Both had strong ritual presence.

To be with Olivia in the temples of her home Clonegal Castle, Ireland, as the oracular priestess spoke the words of the Goddess was deeply moving. Deeply moving too was to experience Jean as the Priestess in one of the Gnostic Masses that she and her husband celebrated for 25 years or more, four times yearly in their temple space in London. An invitation to be one of the congregation in the Mass was cherished by Britain’s Pagans and occultists.

Both women combined with grace the mundane and the spiritual, which included in Jean’s case a professional career as a psychologist that culminated in a directorship of the UK’s largest independent social research organization, SCPR, later renamed NatCen. Both women through their work were people who transcended boundaries.

One of Jean and Zach’s early magickal ventures was to create a series of ‘Bridges and Boundaries’ conferences to bring together people from across Pagan and esoteric communities, and Jean was a major driver in broadening the appeal of the Pagan Federation from being predominantly Wiccan to a wider Pagan base. Olivia’s vision for the Fellowship of Isis was also broad-reaching and inclusive. The Fellowship with its minimal doctrine and structure was established to draw together people from all spiritual traditions to honor the Divine Feminine and to find a place for the Goddess in the shrine of the heart.

Living Life to the Full

Both Jean and Olivia lived fulfilling and successful lives well into their last year of life. In Jean’s case, she spent her last 25 years working on the development of The Pagan Federation. Her previous academic writing of erudite articles such as, The use of interaction coding and follow-up interviews to investigate comprehension of survey questions (Sykes and Moreton-Williams 1997), gave way to more esoteric but equally insightful works. The Gods Within (Williams and Cox 2008) was followed only this summer by a book of rituals, The Play Goes On (Cox, Williams and Friends 2015). Despite their longevity, both women left us, in a sense, too soon. These were two powerful yet humble, independent-minded, magickal woman who were still making an enormous impact on their spiritual communities, through their writing, ritual presence, and their wide international networks of personal contacts. They died with still much more to give.

Which brings me to a final 2015 thought in contemplating the lives of these two remarkable women whose spirit has touched my life. Jean Williams was less public than Olivia Durdin-Robertson and less prolific a writer, but she was a central figure in the Pagan and occult community in Britain.

Only some of the rare interviews with her, such as that for Wiccan Rede (Russell 2004), can be found online, but she appears pseudoanonymously in the research writings of many Pagan academics: those who work behind the scenes can be as important and influential as those who take centre stage. Unsurprisingly, Jean never wanted to be President of the Pagan Federation. I and others had to argue long and hard to persuade her that at that point she was needed in the central role. With her birthday poised on the cusp of Cancer and Leo, she often preferred to lead more subtlety, but nevertheless lead she did.

Olivia and Jean were people who inspired others to become who and what they were and to find their own role in the wider community. They were empowered women who empowered others. They were women who knew the importance of getting things done and that time does not standstill. And in knowing this, they were able to contribute so much.

At the turning of the year, we can honor their lives and memories by doing as they did – by serving others, by not doing tomorrow what can be done today, and by knowing that however long we live, for some of us there will never be enough days to do all that we can do.

Let 2016 be a year of creative doing, of giving to others, and of making use of what we have to give to the world. Around us there is much darkness, but the lives of those who inspire us are like a light in the darkness; a light that gives us eyes to see what each of us can make and do and give in honor of the Goddess, however we name her, She who is Isis of the Thousand Names.

The only moment that is real for us is the passing moment,
because only now have we the power of using our free will.

The past is a phantom world unalterably fixed which is slipping away from us,
and the future, until it becomes the time for present action, has no existence.
(Olivia Robertson. Field of the Stranger, 1948, 70)

You can read Greening the Spirit in: Italian, French, Spanish, and Polish! 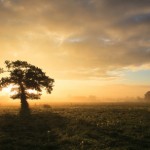 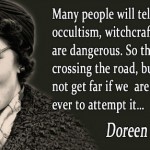