You Said its a Heart Problem On Ash Wednesday

To those who say its a heart problem….

You take a complex issue and simplify it.

You turn gun “control” into the inability to own a gun at the expense of having the ability to own any type of gun and its variations.  As much as you can modify your AR-15 with accessories and still have an AR-15, you can modify the responsibility of gun ownership and still own a gun.  Background checks do nothing to hurt responsible gun owners.  3-7 day holds do nothing to ruin your already planned hunting trip.  Using an FFL to sell your gun to another person does nothing to your inability to sell your gun.  In fact, it takes liability away from you.

When you say its a heart issue and not a gun issue, you assume the triggers in our hearts know nothing of the access to guns that is so easily had.  You say “this pile of guns” can’t hurt anyone.  Well they can’t hunt either, so what’s their use if not to be in your hand?  Stop deflecting.

You say its a heart issue.  Okay, then we need your help to work to heal our hearts.

If its a heart issue, you need to demand better training for gun owners, with yearly renewals, because we need to train the triggers in our hearts to not be pulled when there is a trigger behind our finger.  Tell me why not?

Last week we “celebrated” RAWtools being around for 5 years.  It just means we still have gun violence.  It means we started because of a school shooting in Connecticut and we’re still here because there was a school shooting in Florida on Valentine’s day.  If there is a celebration, its only because there are people supporting action against gun violence between the voting cycles.  Like a man who stopped by and said, “I’m former military, and still target shoot, but I love what you all are doing.  We need some common sense in this country.”  Common sense moves beyond legislation.  (His pictures are below.) 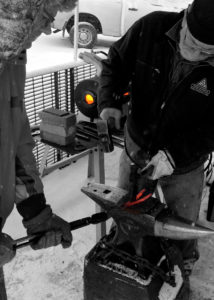 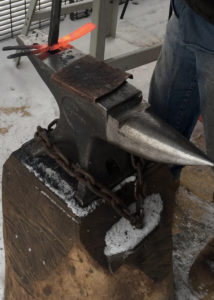 When you say its a heart problem, you validate vengeance.   When you say its a heart problem you say, “Only a good heart with a gun can stop a bad heart with a gun.”  I say a good heart can embrace a “bad” heart with open arms.  Because a good heart knows at any moment it can become a bad heart bearing arms.  Like when their children are shot and killed in their school cafeteria, library, hallway, or classroom.  Who wouldn’t want vengeance?  No one can be faulted for that feeling.  But when we do unto others as they have done unto us, we look more like mass violence.

I happen to think its a gun problem AND a heart problem.  I am convinced that Micah (4:3-6) and Isaiah (2:4-6) knew this, too.  Turning our swords into plowshares, spears into pruning hooks, and guns into garden tools requires the action from our head, our heart, our soul, and our feet.  It requires a new way of life.  A way of life that trains for war no more.  A way of life that moves us toward a vine and a fig tree.  Its a way of life that lays down our guns so we can deal with our hearts.

You said its a heart problem on Ash Wednesday.  We’ve had too many Fat Tuesdays and I’m weary of the gluttony of the gun.  Its time to give up our guns.  And its Lent…’tis the season.  And if you really believe its a heart problem, you won’t really care if you own guns or not.  If that’s the case, we’d love to turn your gun into a garden tool, for free.

If its a heart problem, the problem is “the good hearts” still want guns.  Disarm your heart, it will tell you to lay down your guns.

One earth, as it is in heaven.

The Theology of Riot
The New Paraclete
Related posts from Voices of RAWtools: Forging Peace in a World of Violence