Why the Mardi Gras Indians Won’t Bow Down

Strong, Powerful, Proud: all of these words have been correctly used to describe the Mardi Gras Indians of New Orleans. The tradition is older than the city itself. Some say its origins date back to the 1700’s, but like much of the city’s history, everyone loves to debate it. The names are as exotic as the costumes: Guardians of the Flame, the Black Seminoles, Creole Hunters, Wild Tchoupitoulas, Golden Eagles, Wild Magnolia, and the Flaming Arrows to name a few. There are over 50 tribes in the city according to some. This is history, culture, and pride in graceful action.

Mardi Gras Indian history is an interesting gumbo of influences just like the city itself. There is evidence of the Native people of New Orleans, tribes like the Choctaw, the Seminoles, and the Chickasaws helping to free people of color from slavery. These practices led to the infamous “Natchez Revolt” where Native people and slaves alike attempted to protect and defend native land from French intrusion. Unfortunately, they were betrayed, and a bloody massacre ensued with some of the slaves beheaded, and their heads placed on pikes on the levee as a scare tactic. The secret alliances born in the wake of these horrors did not die. Native people continued to help slaves escape to the maroon camps in the swamps. According to author Willie W. Clark Jr., “in 1746 archives begin to refer to slaves dressing as Indians, as the African-Americans began to celebrate Mardi Gras in their unique customary fashion. These were in all likelihood, the first known “Black Indians.” So it begins.

Quite frankly, no other group in the entire world takes their costumes as seriously as the Mardi Gras Indians. The estimated cost of a suit if we look at materials, time and labor, can run anything from a low $18,000 to upwards of $60,000. People spend all year working on a new suit, and every spare pair of hands is put to work. It is truly a labor of divine love. The suits can weigh over a 100 pounds, and as someone who has had the honor of trying one on, I can truly say this is some “heavy” and powerful magic.

The Mardi Gras Indian tribes have their own unique structure. There are Spy Boys, Flag Boys, Wildmen, Big Queens, First, Second, Third Chiefs and finally Big Chiefs. The first you will probably see is the spy boy. “Here Comes My Spy Boy …” as the song goes. The spyboy is a scout. The Spy Boy, is first, the baddest _____ hush your mouth.  There are flag boys. There are Big Queens, resplendent and glorious in all their beauty. We would never forget to mention the little queens too, training and twirling their way through this honored ancestral tradition. When two tribes meet there are elaborate movements, dances, rituals and customs that happen, it is a sight to behold. The Wildman’s job is to clear the way, so the meeting can begin. Spyboy meets spyboy, and so on until the Big Chiefs come together. They chant, sing, greet, and posture with each other, in an elaborate ceremony that has evolved over centuries. What used to be a dangerous confrontation, is now a display of respect and honor. In a way for me this is what New Orleans is really about, families, folks and friends coming together in supportive majesty. The Mardi Gras Indians are the prettiest, the baddest, the toughest… they fought slavery, segregation, oppression, storm, politicians, and whatever this weird, wild city of New Orleans has thrown at them. Why won’t the Mardi Gras Indians bow down? THEY DON’T KNOW HOW !

More about Mardi Gras Indians, Chiefs, Music, Battles and more on the next installment of Voodoo Universe. Please subscribe to our RSS feed, and follow us on twitter so you don’t miss a thing! 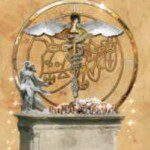 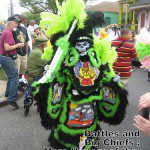 February 28, 2014 Battles and Big Chiefs: More History of the Mardi Gras Indians
Recent Comments
0 | Leave a Comment
Browse Our Archives
get the latest updates from
Voodoo Universe
and the Patheos
Pagan
Channel
POPULAR AT PATHEOS Pagan
1