Samhain means ancestors, food, celebrations, and Samhain songs. Everyone has their favorite Samhain song, the best Witchy tunes that put you in the mood for magick and mystery. I know that i have my favorites and thinking about those got me thinking about the songs that my fellow witches are playing this time of year.

My own personal favorites include “I Put A Spell On You,” by Screamin’ Jay Hawkins. In my post Screamin’ Jay Hawkins Put A Voodoo Spell On You, I wrote “The song came through like a message from the spirits and by the spirits. Voodoo and Blues walk hand in hand, and this song is a beautiful example of this. Screamin’ Jay Hawkins went on to write more songs about Voodoo and expand upon the persona he had created.” The song itself expanded too and was later recorded by Nina Simone, Creedence Clearwater Revival, Annie Lennox, and Marilyn Manson. Many are also familiar with the version by Bette Midler in the popular film Hocus Pocus.

Another favorite I also truly enjoy this time of year is Donovan’s Season of the Witch. It has been called both ritualistic and supernatural, and is one of the most covered rock songs of the 1960s. I have always had a profound respect for this artist and during my recent trip to Ireland I found myself outside his lovely home. Unknown to me my gracious hosts were good friends with the musician, and I got to meet his kind and generous wife. One of my favorite covers of this tune is by one of my favorite people Dr. John, and it appears in the film Blues Brothers 2000. It has also been covered by such notables as Lana Del Rey and Joan Jett.

Athena Dugan is a drummer, labyrinth creatrix,  and witch who I have worked with and respected for decades. When I spoke to her she told me that she too shares my love of Donovan’s Season of the Witch, but also wanted to mention that as far as her favorite Samhain song goes she loves ”  the song Night Sea Journey by Wendy Rule. It’s a magical witchy Samhain like tune for me. It’s like connecting with the ancestors, the oceantide, the earth and sea. It’s a really hypnotic tune. I’ve listened to it whenever I use my finger labyrinth for a magical meditation. The song and the motion of moving my finger along the winding paths of the labyrinth and Wendy’s words, I’m making a connection with the deity or ancestors while meditating.”

The amazing music of Kellianna was the top Samhain choice for many of my friends with many listening to her The Ancient Ones album or Serpent Mound song, but when I talked to her she told me that she herself listens to The Highwayman by Loreena McKennitt this time of year.

Lady Rhea, this famous Witch Queen of NYC and author of The Enchanted Formulary, said that she loves “a song by Queen that speaks of love and remembrance. Teo Torriatte. Let us cling together.” The song exemplifies a very fitting notion for this time of year.

Witchdoctor Utu is the author of Conjuring Harriet “Mama Moses” Tubman and the Spirits of the Underground Railroad and the founder of the Dragon Ritual Drummers. The Dragon Ritual Drummers are my favorite drum group anytime of year, but their Bamboula is certainly one of my favorite listening pleasures this time of year. When I asked Utu about what he listens to this time of year he responded “Welcome to my nightmare by Alice Cooper ; I play the entire album every Halloween.”

Najah Lightfoot is the author of Good Juju- Mojos, Rites & Practices for the Magical Soul . When I caught up with her to ask about her favorite Samhain song she responded with her top ” 3 songs; “Lullaby” by Nox Arcana, Winter’s Knight CD, “It’s A Dead Man’s Party,” by Oingo Boingo, and “Toccata and Fugue in D Minor,” by Bach.

Jason Mankey, an accomplished author and my fellow Patheos blogger is known for his connection to both music and magick in ritual, so when I began thinking about this topic obviously I wanted to include his thoughts. He created his own Playlist: Samhain back in 2013 for his blog Raise The Horns. When questioned recently he said,

“My favorite songs this time of year:

-Canaan’s Land by Kate Rusby. It’s an old Christian song, but it has this sort of triumphant ‘They are home now’ when it comes to the spirits of the dead

-Gentle Solder of My Soul-Dave Carter and Tracy Grammar. Dave’s very early passing probably plays a role in me thinking this is a song for Samhain, but every time I hear it I can feel souls stirring in the breeze. ”

As always if you have enjoyed what you read here rock on ! And don’t forget to like, comment with your favorite Samhain song below, and share ! 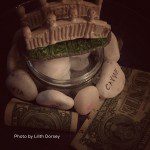 November 7, 2019 What To Do About Psychic Vampires & Energy Terrorists
Recent Comments
0 | Leave a Comment
"Interesting topic. I've been looking for a journal for a Book of Shadows for a ..."
Anonymous Are Paganism and 21st Century Technology ..."
"I like it.."
🍓Cristina looking for lover🔞 Herbal Magick: Ginger Is Hot Stuff
"Do you have a source for ginger being a part of the Norse pantheon? I've ..."
Wolf Herbal Magick: Ginger Is Hot Stuff
"Lakota, Blackfoot and Seminole ancestry. Cool! I'm nerdy like that. I love learning about other ..."
Amanda Ingalls No, I’m Not Your Spirit Animal
Browse Our Archives
Related posts from Voodoo Universe