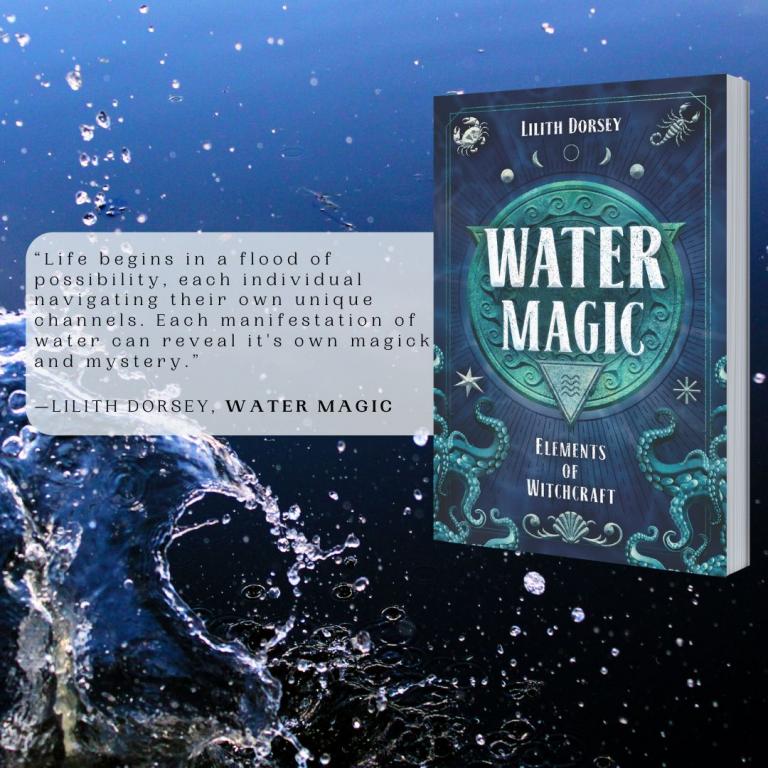 The following is an except from Lilith Dorsey’s new book Water Magic published by Llewellyn Publications.

Water makes up most of our planet and also most of our bodies. Refreshing, cleansing, strong, and sublime, the power of water is all around us. Humans all need water, they could never survive without it. As delightful as it is, people can live without even love, but not water. This is especially true when examining the role of water in a sacred context.

Both literally and figuratively humans are born in water. Floating joyously in our amniotic sacks our origins are a dark bliss. Then life begins in a flood of possibility, each individual navigating their own unique channels. Each manifestation of water can reveal it’s own magick and mystery. There are sacred wells which have been used to bless and heal for centuries. Oceans which are deep and intense. Rivers that allow passage and transformation. Rain water, Waterfalls, storms and glaciers made of ancient ice all have their own special energy and power.

The inimitable power of water is both so close and yet so far. When I first began writing Water Magic I was a bit puzzled as to the reasons the universe had for steering me in this watery direction. I have been a lot of things, a New Orleans Voodoo priestess and scholar, a filmmaker, an Orisha devotee, and even at times a love witch, but few have ever considered me a Water witch. I don’t have that many water elements in my astrology chart, and honestly I’m not even that fond of swimming. Upon reflection however, more was revealed. Much of the religion of New Orleans Voodoo revolves around the sacred Ashe or energy of the Mississippi River. Many a time I have stood on her banks offering songs, dances, prayers, and gifts to honor her powerful magick. The connection between the spirits of New Orleans and the water was the subject of my documentary Bodies of Water: Voodoo Identity and Tranceformation which I created shortly before the advent of Hurricane Katrina in 2005.

Another way in which I feel deeply connect to the energy of Water is as a devotee of the Orisha Oshún. In African Traditional Religions Oshún represents the Ashe, or sacred energy, of the River. She is seen as an Orisha of love, marriage, ,money, beauty, dance, and much more. African Traditional religions often see special significance where others would only see coincidence. These magickal moments surrounding the water have been plentiful in my life. I remember the first St. John’s Eve celebration I attended in New Orleans many years ago. I had woken up early, which I often do, and felt the need to leave offerings at the Mississippi River for the Orisha Oshún. I quickly hurried to the nearest open market to purchase oranges and honey to leave for her. I walked the few streets to the river steps and proceeded to leave my items, tasting the honey, and placing the oranges on the edge of the water. As I began to sing and pray I was joined by two other practitioners, a La Regla Lucumi (Santeria) priest and a woman devoted to the religion. I had never seen them before and I felt truly kissed by Oshún as I saw them begin to leave offerings and receive blessings from the water. Later that day I attended the St. John’s Eve celebration at the Voodoo Spiritual Temple. What followed was a beautiful ceremony for the community, and the beginnings of a life that I am honored to still be living today.

Water magic can help to uncover things, and while some of those things are delightful, others remind you why they were hidden in the first place. I remember another time in the distant past when I had gone to leave offerings for Oshún at the river. This time I was visiting a friend in Virginia who happens to be a Babalawo or Ifa priest. He brought me to his local river, the James river to leave offerings and commune with the Ashe of Oshún. I went with tears in my eyes and a heavy heart as I pondered my troubles in my romantic relationship of the time. As I waded in the water and bent down to leave my offerings, what did I find at my feet but a dead fish. It was clear the powers that be had answered before I even asked. There have been many other significant times in my life when Water has answered my prayers, whether I liked what the actual answer was or not.

Water is associated on every level with the emotions, and oftentimes these can be difficult to deal with. They can be as fierce and intense as a raging thunderstorm, or as placid and gentle as a still pond. Getting in touch with one’s true emotions and feelings can be really tricky, but the magick of water can help us do this, as calmly and effectively as possible.

When I began this book it felt a bit like approaching water itself. The power and magick of water is a formidable topic. Honestly I looked out across the places, beasts, and beauty that is water and felt that the journey ahead was a bit daunting. There were times when writing it seemed like an existential conundrum, trying to define the scope of water. An element that is ever changing, where no one truly knows its depth, Water is a slippery thing to classify. There were many long and sleepless nights. But as my research and resolve began to flow like the waterfalls and the rivers that grace these pages it got much smoother.

It is my sincere hope that in here you find everything a book on Water Magic should be, and needs to be. May the sublime clarity of water guide you to your path ! Order now !

November 29, 2020
Rise In Power Mambo Bonnie Devlin: A Lesson In Loss And Gratitude
Next Post

December 10, 2020 The Herbal Magick of Mistletoe : Kiss Me Twice
Recent Comments
0 | Leave a Comment
"The whole series starting getting on my nerves mocking the pagan religion w/ the Gods ..."
JP Vanir New Voodoo Review: Chilling Adventures of ..."
"Oh how cool! I didn't know ferns had so many magical uses. I'd heard the ..."
Holly Herbal Magick : Ferns, Nature’s Fine ..."
"Harsh history to say the less. You really have to wonder what some object's story ..."
David Brevik Hoodoo How We Do : Saint ..."
"I hope you will update us when there is more information."
Lynne Treen A Marie Laveau Mystery Solved ? ..."
Browse Our Archives
get the latest from
Voodoo Universe
Sign up for our newsletter
POPULAR AT PATHEOS Pagan
1

When Grief Comes 'Round on Cat...
A Modern Traditional Witch
Related posts from Voodoo Universe