Kuba Cloth – The African Fabric That Tells A Story

Anyone paying attention to interior design lately has noticed an increase in African textiles, most notably Kuba cloth. Kuba cloth is traditionally made by the Kuba people of what is known in modern times as the Democratic Republic of Congo. The cloth is made from raffia fiber. The fibers are cut and woven by the men of the society, however the women are responsible for the elaborate embroidery and designs. All members of society come together to create these elaborate geometric masterpieces, which are frequently used to tell stories through their symbols, and to honor the ancestors.

A recent article by NPR.org tells us the cloth  was “displayed at one of the first major exhibitions of African art in Europe, in Brussels in the late 1800s, and at the Brooklyn Museum in 1923. The French painter Henri Matisse kept some in his studio and said he would often stare at them “waiting for something to come to me from the mystery of their instinctive geometry.” His 1947 paper cut-out Les Velours reportedly drew on Kuba appliqué. Kuba textiles even appeared in episodes of Grey’s Anatomy and Frasier as archetypes of African fine art.”

Very often the history of Kuba cloth becomes intertwined with the tumultuous history of the Kuba people and their Kingdoms. From the 17th until the early 20th century the Kuba Kingdom was one of the most influential in the world, dominating both the ivory and rubber market. The complexity of their textiles was directly connected to the socio-political structure. The cloth could convey status, both marital and societal, as well as age, and character. Frequently the clothes were worn by royalty, and/or commissioned for special occasions. Nowadays you are likely to find these original creations hanging in a museum, but the patterns and designs have found their way into mainstream culture in a hopefully respectful nod to it’s royal origins ! 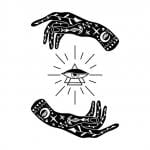 March 10, 2021
Palmistry, Outside the Lines ! By Tehron Gillis
Next Post

April 14, 2021 HooDoo How We Do : St. Martin de Porres For Fighting Racial Injustice
Recent Comments
0 | Leave a Comment
"Interesting topic. I've been looking for a journal for a Book of Shadows for a ..."
Anonymous Are Paganism and 21st Century Technology ..."
"I like it.."
🍓Cristina looking for lover🔞 Herbal Magick: Ginger Is Hot Stuff
"Do you have a source for ginger being a part of the Norse pantheon? I've ..."
Wolf Herbal Magick: Ginger Is Hot Stuff
"Lakota, Blackfoot and Seminole ancestry. Cool! I'm nerdy like that. I love learning about other ..."
Amanda Ingalls No, I’m Not Your Spirit Animal
Browse Our Archives
Related posts from Voodoo Universe