The World’s Largest Crucifix: When We Need God to be Big

The World’s Largest Crucifix: When We Need God to be Big August 20, 2018 Kristy Burmeister

About fifteen years ago, I was standing in the Christian section of a bookstore with my sister. She was browsing while I was trying to get her to hurry up by complaining about how terrible Christians were and how stupid their books were and why did so many people from Dad’s church think my sister and I were the same person? I was blonde. She was brunette. It wasn’t that complicated!

The only reason I shut up is because a man from the church our father’s church came walking around the corner of the aisle. Since my dad was his pastor, I figured I ought to button it. I didn’t like talking to most of the people from church, and most of them didn’t seem to enjoy talking to me either, so I left my sister to talk to him and wandered a little further down the aisle where I grabbed a couple of books to pretend to look at.

One of the books I picked up was Marcus Borg’s The Heart of Christianity. I thought, “Well, this is something I’ve never seen before.”

For some reason that I still don’t understand, I bought the book. (I don’t remember being drunk, but anything’s possible.)

Then I came home and stuck that book on my shelf without cracking it open.

I found the book a couple of years later while unpacking boxes just after a move. My life was changing a lot at the time. We’d just built our first home. I’d just had a baby. I was starting back to work. Or maybe I just read it because we hadn’t gotten the cable hooked up yet.

I’d grown up with a rigid version of Christianity. I wasn’t really sure what to make of Borg. I’d be reading along and feel this almost-hope sort of swell up like maybe it was possible I’d been a Christian this whole time without knowing it, but then I’d stomp that feeling down and berate myself for being so unrealistic. I knew darn well there were very specific parameters a person had to stay within to be a Christian. In my world, that was a tiny fundamentalist box.

I never finished the book, and I don’t remember much about it, but I do remember one thing that stopped me in my tracks. He talked about God being a mystery. God is bigger than the boxes we try to stuff him into. We can’t expect to fully understand him.

But I’d grown up with people who thought they did fully understand God. How often had I heard, “God hates . . .” or “God wants me to . . .” come out of someone’s mouth? It was amazing how tidily God’s will lined up with what was most convenient for all those people.

While reading that book, it hit me that God isn’t the size of the small, fundamentalist church in Arkansas I grew up in.

God is so much bigger than that church.

Sometimes I need God to be human-sized. I need to know that he became one of us and suffered as we suffer. I need that connection with Jesus so I know God gets it. He isn’t distant and observing human suffering from above. He got right down into it alongside us.

I made my first trip over there in 2015. I wasn’t Catholic, and I actually headed over there with someone who calls herself an ex-Catholic. (I guess I felt like I needed backup in case I had to answer Catholic riddle questions to get in or something.)

The pictures don’t do the crucifix justice. It’s hard to get the scale of it if you aren’t standing right under it, looking up at Christ.

It might seem like a weird thing to build. How is a giant crucifix in the middle of northern Michigan useful?

It was sure useful to me.

My sister and I were planning another trip at the time. A couple of weeks after I stood at the foot of the world’s largest crucifix, I stood inside the sanctuary of that small, fundamentalist church that had inflicted so much pain on me. God walked into that tiny church with me even though he doesn’t fit in that small world.

I needed God to be small enough to understand my pain and big enough to confront my past with me. What better representation of the paradox of God’s size than a giant crucifix? Christ crucified is so big and so small.

I’ve been back to Cross in the Woods twice since then. I like to go back when the world feels too oppressive.

Of course, God being big doesn’t protect me from being hurt. It doesn’t work like that.

I don’t totally understand God. I won’t even pretend I always trust God. I don’t sit around thinking lots of happy thoughts about how everything will work out because God’s got a plan. That lets me off the hook way too easily for my own action and inaction.

We can be small. We don’t have to take on the whole world alone. 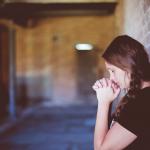 August 17, 2018
PTSD and the Church: When Religion is a Trigger
Next Post 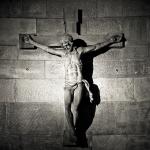 August 23, 2018 Pray. Fast. Act.
Recent Comments
1 Comment | Leave a Comment
Browse Our Archives
get the latest from
Way Station in the Wilderness
Sign up for our newsletter
POPULAR AT PATHEOS Catholic
1

Dale Ahlquist is on a mission...
Chaos and Old Night
Related posts from Way Station in the Wilderness