Famed Italian poet Dante Alighieri died this month almost 700 years ago, in 1321 (aged c. 56), and his work, The Divine Comedy, still carries resonance in our age of discord. La Divina Commedia — the first major work of literary poetry in Italian (as opposed to Latin) — is comprised of three parts, L’Inferno (Hell), Il Purgatorio (Purgatory) and Il Paradiso (Heaven) and Dante populates these spheres with real personalities, naming names. Many of Dante’s critics of the time took umbrage with those whom the author consigned to Hell. But for Dante, the unseen but ever-present tension between what people do in earthly acts and eternal rewards (or lack thereof) is tantamount to understanding the nature of God and his relationship to his creation. Dante himself said that L’Inferno depicts how “man, as by good or ill deserts, in the exercise of free choice, becomes liable to rewarding or punishing justice.”

In her translation and commentary of L’Inferno, Dorothy Sayers insists that the downward descent of Dante’s Hell is not cruelty or blood-lust on God’s part: “Neither in the story nor the allegory is hell a place of punishment to which any 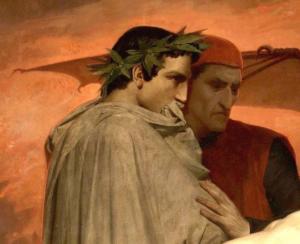 body is arbitrarily sent: it is the condition to which the soul reduces itself by a stubborn determination to evil and in which it suffers the torment of its own perversions.”

Some of you may not believe in hell. Few of us can conceive of it even if we possess some level of belief about it. Dante’s “circles of hell” make some sense of it (such as could be made of hell) in the fact that his hierarchy of perdition is quite unlike what one might expect. For example, gluttony is darker than lust, and greed is lower than gluttony. The worst of all — the center of Dante’s Hell (which is not fire, but ice) — is betrayal.

Dante renders the narrative of his journey to Hell as being escorted and helped there under the watchful and dispassionate guidance of the ancient poet Virgil (b. 70 BC). Together they enter the place where “hope is gone” and there is “no way back,” though he and Virgil have entered not as condemned, but as visitors given a glimpse. This, for Dante, demonstrates the depths to which any of us can sink, but leaves open the possibility of a new beginning. Dante says hell is where “the soul’s self-knowledge in all its evil potentialities” is realized.

The journey through nine circles includes, from lesser to worst:

1. Limbo: (a lonely desolate place “where nothing shines at all” and the beauty of God’s presence is excluded); or — in Dante’s time, unbaptized 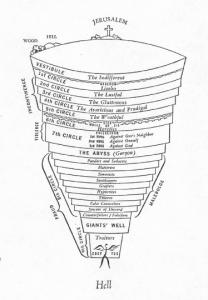 3. Gluttony: (“rain, ceaseless, heavy, cold”) those who cannot control their appetites, nor have the discipline to overthrow inertia

6. Heresy: for Dante, those who possess intellectual pride that leads to spiritual obstinacy; one who prefers his own judgments over the wisdom of God

7. Violence: Those who have committed violence against God, nature and art;  (writes Sayers) they “lie supine facing heaven, which they have insulted.”

8. Fraud: Dante: “a breach of trust against the confiding . . . . Since man alone is capable of fraud, God hates that the worst. The fraudulent lie lowest then, and groan deepest.”

9. Betrayal: Dante describes how these “gaze up to the towering walls of Hell.” / “O well for you, dregs of damnation, thrown in that last sink which words are too weak to tell.”

It is worth highlighting that the journey into L’Inferno begins for Dante on Maundy Thursday, the night on which Jesus was betrayed by Judas and abandoned by his friends. The journey ends, appropriately, on Resurrection Sunday (Easter). 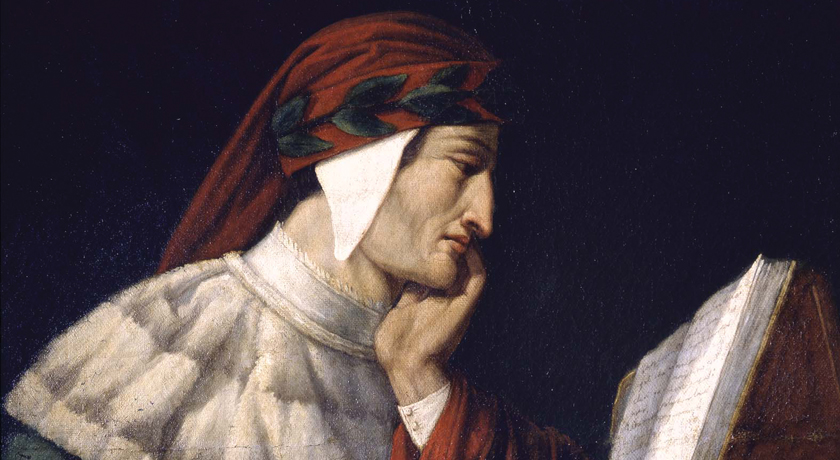 Michaelangelo said of Dante: “simil uom ne` maggior non nacque mai.” [A man such as he, there is not, nor will there be any greater.]  Dante’s Canto XI in Il Paradiso is dedicated to telling the story of Saint Francis. Dante himself embraced the Third Order of the Franciscans later in his life and deemed Francis as the personification of the dawn of a new age and new light in a dark world. He said of Francis, “He was not yet very far from his rising when he began to make the earth feel some comfort from his great virtue”;  and “his marvelous life would be better sung in the glory of the heavens.”

September 11, 2017
Amid September 11 Remembrances, Think on the Curious Case of Tony Rooke
Next Post

September 20, 2017 Are You Ready for "After-birth Abortion"?
Recent Comments
0 | Leave a Comment
Browse Our Archives
get the latest from
New Visions
Sign up for our newsletter
POPULAR AT PATHEOS New Visions
1

The Birth of Jesus: According to...
Wake Up Call