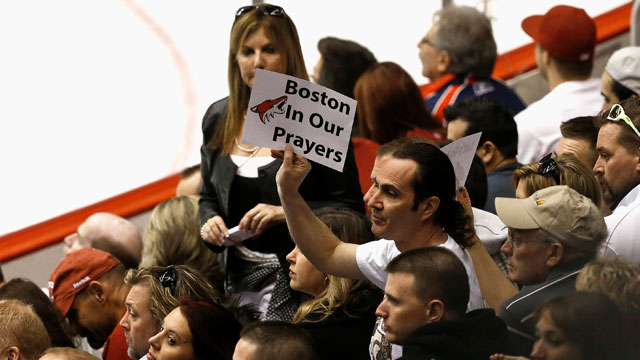 When Scott texted me the news of the Boston Marathon bombing, I was looking at impressionist paintings in the National Gallery ofArt in DC.  We’re spending part of April vacation here both for fun and college visits, and the shocking news felt surreal.  Immediately I wondered if anyone I knew was hurt.  But statistically speaking, with such a crowd, everyone I knew should be well, shouldn’t they?

Seconds later, he texted that his brother and sister-in-law were fine.  Both qualifiers for the marathon, they finished earlier than 4 hours and 9 minutes, the time the first bomb exploded.  But then began the tracking of runners, most easily done through Facebook.  My colleague Tim wrote that an extra slow day meant he was still 30 minutes away from the finish line.  My new pastor’s wife wrote that she learned he and their daughter were safe via a text from a stranger’s phone.

The next morning an email trail among my gym buddies (aka the gym superfoxes) began checking in on an older woman running for the 28th time.  We don’t remember her last name, but we spin together several mornings a week at 6 a.m.  Thankfully, someone saw her rowing away at 7 a.m. and she was fine.

Meanwhile, friends have been Facebooking us.  Scott’s the main person those far from Boston associate with running the marathon (even though he’s only run it once) but we’ve spent years on the sidelines of Newton Wellesley Hospital cheering on the runners.  One friend wrote, “Please reassure me Scott was too busy this year.”

Slowly checking off everyone who we could have known, making sure they were safe, breathing a sigh of relief.

Then last night I learned that the BU grad student who was killed in the bombing came on our fall retreat and roomed with a student in our BU international fellowship.  My colleague posted a picture of her smiling in the BU retreat photo, and I saw that I had eaten Saturday night dinner with her and her friends.

At the time, they might have felt a little horrified that the old lady directing the retreat, and not some hot guy, was crashing their fun (it was the only available seat).  But they were polite.  We talked about where they were from—2 from China, one from Taiwan.  They told me what they studied and how grad school was going for them.  They also told me that they had come on the retreat in part to meet men, and we all giggled about that.

I don’t know the spiritual state of this woman who died.  I can’t begin to imagine the grief of her parents who sent her so far away only to have this tragedy happen.  But I hope she got to flirt with some guy on the retreat.  I pray that she felt touched by God in a new way, and welcomed into some new friendships.  And I know that God walks with and seeks to comfort all those who loved her.

Despite all odds, I’m connected to someone who died.  And myriad others are connected to those who loved her.  I’ve spent the morning trying to make sure the roommate gets cared for—she’s connected to faculty in our faculty fellowship, she babysat for us on our faculty retreat so is Facebook friends with my daughter (but not me!), and of course, with the BU grad ministry.  I’ve been asking for prayer, and all sorts of friends are writing asking if they can share my request with their prayer communities.  The answer—yes, yes and more yes.  Please pray. 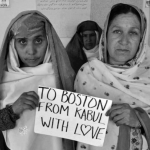 April 20, 2013 Why I Hate the Images from Kabul and Syria to Boston.
Recent Comments
0 | Leave a Comment
Browse Our Archives
get the latest from
Family
Sign up for our newsletter
POPULAR AT PATHEOS Family
1