Teaching Our Kids to Talk 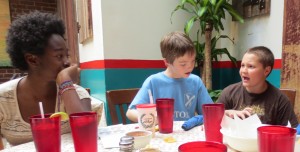 Scott’s favorite mantra, which he regularly preaches to our kids, is “God gave you two ears and one mouth for a reason–you should listen twice as much as you talk.”   And they clearly seem to neither listen to, nor comprehend what he’s saying.

We’re both pretty good listeners.  So you would think our kids would be good listeners also.  Not true.  This came home one night over dinner as kids talked on top of each other, interrupted, and generally created a very unpleasant hubbub of noise, creating indigestion out of the perfectly delicious meal I had cooked.

So we decided to give a tutorial for good conversation.  Here are the rules we invented on the spot:

“But then I’ll never get to talk!” came the anguished response.

“You’ve got to trust that if you’ve listened well to someone, they’ll want to listen to you as well.”

We practiced a little around the table—it felt so artificial that we were pretty sure the lesson wouldn’t stick.

But then on an evening run with a daughter, I was surprised to hear, “So Mom, how are you doing?”

“How’s your relationship with Jesus going?”

Really?  You want to hear about my relationship with Jesus while I’m trying to keep up with you?  But I tried to take her question seriously.  “I think we’re doing OK too. (huff, puff) Not as much time as I’d like together (pant, pant), but I think we’re fine.”

“Good!” she said without a huff, puff or pant.

So I decided to reciprocate, just like we taught.

She didn’t say, “Glad you asked,” but it was as good as that.  She happily launched into all she was thinking and how she was doing and even a little about where she was in faith.  It was a great 25 minute monologue, with small interjections and questions from me when I could breathe.

Since then, our kid who’s a high introvert and shy to boot has complained about shallow conversations with friends.  So I came up with a couple new rules:

For conversation to go deeper,  we often have to “show ours first.”  And hope with faith and prayer that others will see that as an invitation and go deep as well.

October 9, 2013 Makeup in Middle Age or Why I Got My Daughters Make-Overs
Recent Comments
1 Comment | Leave a Comment
Browse Our Archives
get the latest from
Family
Sign up for our newsletter
POPULAR AT PATHEOS Family
1