Why We Must Fight For Our Right of Religious Freedom UPDATED 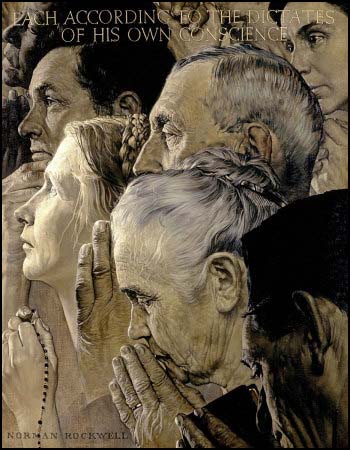 Should Catholics fight the HHS Mandate, and the other moves by the Administration that seek to remove Catholics from the public square? Absolutely. Should we do so only because this issue is a matter of principle? Well, not just for any principles, but for first principles. For God-given principles, and God-given freedoms.

These “rights,” it just so happens, come to us by the grace of God. For those of us who have been blessed with being born, or who have been naturalized, as United States citizens, these rights and privileges have been guaranteed to us by the founders of our republic. They have been written down in a document, with roots stretching back through the Magna Carta, and even further back to the original source of the Natural Law. God Himself.

By happy chance, as St. John of the Cross might put it, as Christians and Catholics in the United States, we have something in common with St. Paul; we are citizens, and thus have rights and obligations thereunto pertaining. Unlike many of the early Christians, and the other Apostles particularly, Paul was a citizen of Rome, and he utilized his status as such to further his apostolic mission. As I mentioned in a post several months back, being a citizen of Rome did not save Paul’s earthly life. He was still martyred for being a Christian. And that fate may indeed await many of us as well.

But use his citizenship to benefit the Church, he did. And I argue that so must we. Now, did Paul gather up arms and armies and attack the temporal Roman Empire in head-to-head combat? Of course not. Instead, he preached, and prayed, and wrote,  his fanny off, traveled hither and yon, and used his citizenship to fight for due process in his own case, when he was arrested. His traveling companion, St. Luke, wrote all about it in Acts. In fact, the Feast of St. Paul of the Shipwreck was being celebrated on the day, February 10, the Obama Administration handed down its shipwrecked “Accomodation policy.”

The bottom line is, that despite the bad news that the authorities were handing down, and conducting, promulgating, etc. at the time, and even when he was imprisoned or under house arrest, Paul continued to preach the Good News. Even when he was in chains, he continued to be a free man, as God intended. A free man who was also a slave for Christ.

Other voices within the Church, like my friend Deacon Scott Dodge, wonder how it is possible that the contraception battle has become the straw that broke the camels back here in the United States? Surely, they argue, we should take this opportunity given us by this impasse to not just fight for our Constitutionally guaranteed freedoms, but also as a teaching moment for our country, so we can explain why we believe contraception, sterilizations, and abortion are contrary to human dignity.

And I agree that we must do that too. The Administration is making this a multi-front war, not just against the Catholic Church, but against religious freedom for all. Catholics must meet the foe of cultural relativism on every front as well. And the Administration has opened a multi-front war against the Constitution itself. Were it not for the fact that the document that our country is founded upon is indeed a one-of-a-kind success story, it probably wouldn’t be worth the time and effort to fight it.

But this isn’t Europe, and the Constitution is different. It is my sincere belief that the Church understands this, and that she sees that the Catholic faithful in the United States need to rally to her cause. And that’s not just my opinion, but the opinion of Our Pope, if his message to the bishops of Washington D.C. back in January was more than just mere fluff.

Here once more we see the need for an engaged, articulate and well-formed Catholic laity endowed with a strong critical sense vis-à-vis the dominant culture and with the courage to counter a reductive secularism which would delegitimize the Church’s participation in public debate about the issues which are determining the future of American society. The preparation of committed lay leaders and the presentation of a convincing articulation of the Christian vision of man and society remain a primary task of the Church in your country; as essential components of the new evangelization, these concerns must shape the vision and goals of catechetical programs at every level.

In this regard, I would mention with appreciation your efforts to maintain contacts with Catholics involved in political life and to help them understand their personal responsibility to offer public witness to their faith, especially with regard to the great moral issues of our time: respect for God’s gift of life, the protection of human dignity and the promotion of authentic human rights. As the Council noted, and I wished to reiterate during my Pastoral Visit, respect for the just autonomy of the secular sphere must also take into consideration the truth that there is no realm of worldly affairs which can be withdrawn from the Creator and his dominion (cfr. Gaudium et Spes, 36). There can be no doubt that a more consistent witness on the part of America’s Catholics to their deepest convictions would make a major contribution to the renewal of society as a whole.

The Church has lived under domination before, and she has dominated before. In 2,000 plus years, she has grown in the knowledge of what she can, and what she cannot do in the sphere of government action. She has seen her influence in Europe dwindle in the face of apathy born of a spirit of accommodation with the times. Evidently, she does not want to repeat that error here. She fights a multi-front world war against apathy and intolerence, using her status as a nation-state wherever it is beneficial to do so in order to fulfill her mission on earth: the salvation of all souls.

And let’s not forget that what we are fighting for is not a utopia, or some man-made version of heaven on earth. No. Some have argued that the whole problem is that the bishops backed universal healthcare in the first place and that this is what you reap when you sow with Caesar. I agree with Fr. Ronald Franco, when he recently wrote on his blog City Father,

This is one reason why I have always cringed when I hear well intentioned people talk about a putative “right to health care.” I have always favored the provision of universal health care by the State – whether directly (as in Medicare) or through private insurance (as in “Obamacare”). I can easily understand why advocates of such policies would want to use whatever language advances their cause. But this constant inflation of political preferences into “rights” only leads to conceptual confusion – such as we are now seeing.

By the “right to health care,” those who use such language obviously do not mean that the government must be prohibited from preventing me from seeking or receiving health care. What they mean rather is that someone else – the taxpayers, insurance companies, whoever – should be compelled by the government to pay for my health care. Since, however, health care is a very expansive concept, which can expand according to different needs and desires (not to mention expensive advances in technology), the concept of some generic “right to health care” is even more imprecise in practice than it is in theory. Exactly what kinds of health care and in what amounts and at what cost are included in such a “right”? All of which then takes the discussion out of the domain of “rights” and back, where it belongs, in the domain of public policy choices to be determined, not by some a priori rights but by political deliberation and debate.

Deliberation and debate is seemingly a lost art, nowadays. Which is why Catholics need to break out this skill, and dust it off, and bring it to bear on this issue, and from across the entire spectrum of Catholic thought. For as John Courtney Murray, SJ reminds us,

Barbarism is not, I repeat, the forest primeval with all its relatively simple savageries. Barbarism has long had its definition, resumed by St. Thomas (Aquinas) after Aristotle. It is the lack of reasonable conversation according to reasonable laws. Here the word “conversation” has its twofold Latin sense. It means living together and talking together.

Otherwise, we just hide behind fragile, ceramic, walls as barbarians march upon us with pitchforks and torches. But we aren’t called to sit hunkered behind the walls of a Fortress Church, see? Instead, we’ve been commissioned to sally forth, no matter what the personal cost.

I don’t pretend for a moment that I have all the answers, or that I’m the smartest man in the room. I’m a lilliputian, and a nobody, plain and simple. But when 160 of our bishops, practically 100% of them, issue letters that are read to the faithful at mass, telling us clearly and concisely why the HHS Mandate is wrong, and that they do not accept the accommodation policy, then I reckon it’s pretty clear to me as a Catholic, one I will add of no particular political stripe, where I need to stand.

Have you been following along with the daily readings of late? Use the handy calendar feature on the USCCB website,and have a look from February 9th on forward to today. It’s uncanny how the scriptures are informing our consciences on this issue.

Think, love, pray, act, repeat. Even St. Francis of Assisi can get behind this. Remember how he ventured to the Holy Land to meet the Sultan during the Crusades?

UPDATES: The Anchoress share thoughts of Our Pope on faith and the future. And Matthew Archbold asks: Will the GOP defend religious liberty? Don’t count on it. And Christopher Tollefsen on what the Church teaches about contraception.

February 15, 2012
Thoughts from the "Tao Teh Ching" translated by the "Chinese Chesterton"
Next Post

February 16, 2012 Hugh Hewitt was at Ground Zero on the HHS Mandate the Other Day
Recent Comments
0 | Leave a Comment
"Vaya con Dios, Leonard; Rest in Peace."
AnonCollie Leonard Nimoy Explains The Origin Of ..."
"Thank you for sharing"
Andy To Break My Fast from Being ..."
"I've seen Matt Maher live four times...twice since this song was released. I absolutely love ..."
Veritas81 WYD Flashback With Matt Maher, And ..."
"Yes, and Dolan should have corrected the scandalous and wrong decison of his predecessor when ..."
sixbunnies Archdiocese of New York Health Plan ..."
Browse Our Archives
Related posts from Why I Am Catholic