The New Pope Will Be Selected When the Conclave Runs Out of Beer March 13, 2013 Frank Weathers

Okay, that’s stretching things a bit. However, the cardinals have been blessed with a supply of good beer during the conclave, courtesy of the Monks of Norcia, from San Benedetto, Italy. They delivered the vital liquid just in time for the conclave doors to close.

On Monday, March 11, Br. John and Br. Francis delivered several cases of our beer to the cardinal electors who are staying at the Domus Sancta Martha. Its Director, Msgr. Battista Ricca, receives the cases of beer, since the cardinals were busy preparing for the start of the conclave. 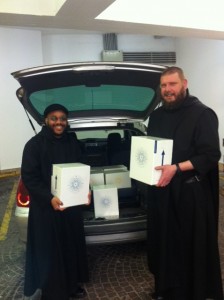 Yes, the monks make house calls! After all, it’s only 2 1/2 hours to the Vatican via the Autostrada. Take a look at their commercial,

“So that the heart can be gladdened.”  Amen!

Need something to do besides watching the chimney cam at the Sistine Chapel? Spend 40 minutes watching this video of a day in the life of the monastery. Reveille is at 03:30…

Need an idea for Lenten alms giving? Why not support the Monks of Noscia? Make a one-time gift, or set up a monthly donation, right cheer!

P.S. Yes, the Beerbulance is for real. Check out Laughing Squid for details.

March 13, 2013 Sistine Seagull Stages Sit In, Protesting "Cardinals Only" Conclave.
Recent Comments
0 | Leave a Comment
"Vaya con Dios, Leonard; Rest in Peace."
AnonCollie Leonard Nimoy Explains The Origin Of ..."
"Thank you for sharing"
Andy To Break My Fast from Being ..."
"I've seen Matt Maher live four times...twice since this song was released. I absolutely love ..."
Veritas81 WYD Flashback With Matt Maher, And ..."
"Yes, and Dolan should have corrected the scandalous and wrong decison of his predecessor when ..."
sixbunnies Archdiocese of New York Health Plan ..."
Browse Our Archives
get the latest from
Catholic
Sign up for our newsletter
POPULAR AT PATHEOS Catholic
1

Five Years of Troublemaking: A Retrospective
Steel Magnificat
Related posts from Why I Am Catholic