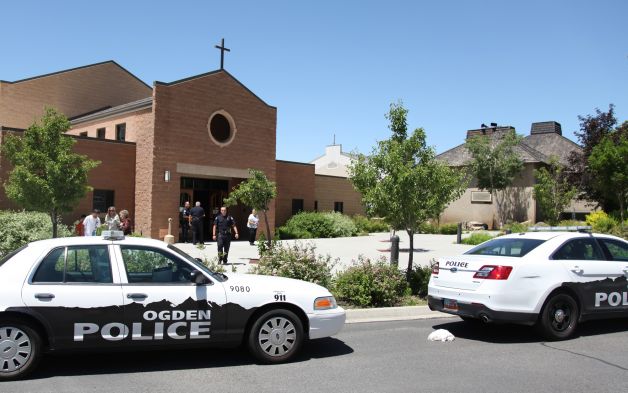 If you were shocked and saddened at the news of a shooting that took place at St. James Catholic Church in Ogden Utah, you aren’t alone.

No one expects violence of that sort to take place on a Sunday, during Mass, in America. The prayers and outpouring of support directed to the family of the victim, and his parish community, overflowed the cup of tribulation.

You see, less than 24 hours after the shooting, James Evans is expected to fully recover. As of right now, I’m calling this the Father’s Day Miracle. Roll clip!

James Evans, Jennings’ father-in-law, was in the back pew of the church with his family. Without saying a word, Jennings went over to Evans, and just as he had knelt down to pray, allegedly shot him in the head.

“He turned his head just at the right time. If he didn’t turn his head, he would have been shot in the back of the head and be dead,” his wife, Tara Evans, said during a press conference Monday at McKay-Dee Hospital.

The bullet entered near Evans’ right ear and exited through his opposite cheek. Doctors say Evans has several more procedures and reconstruction surgeries ahead of him, but he should otherwise make a full recovery. He remained in critical condition Monday morning, but was communicating with doctors and family members at the hospital through nodding, writing and hand gestures. He has a tracheotomy in his throat currently and is unable to talk.

Call it coincidence, call it lucky, call it whatever you like. I call it a Guardian Angel at work, and I thank God that Mr. Evans is alive.

June 17, 2013 Simcha Fisher Is My New Neighbor?
Recent Comments
0 | Leave a Comment
Browse Our Archives
Related posts from Why I Am Catholic