If A Doctor of the Church Says It, Then Why Can’t Pope Francis? UPDATED

If A Doctor of the Church Says It, Then Why Can’t Pope Francis? UPDATED October 2, 2013 Frank Weathers 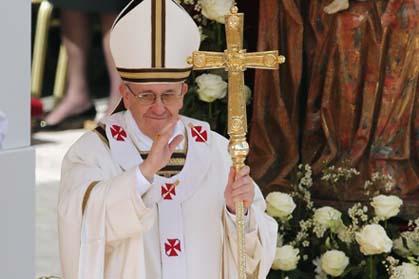 Early on, in the midst of the preparations for the Conclave, while we all wondered who would emerge as our next pope, I made the following statement: “I’m like the grizzled noncom who doesn’t really care who the Commandant of the Marine Corps is, as long as he’s more of a Marine than I am, and you salute him properly.”

By that I meant that all I was concerned about regarding the forthcoming Pope was that a) he was holier than I am, and b) folks respect him accordingly. This past six months have shown (to me anyway) that my two criteria have been met, and handily.

In truth, I expected nothing more, and nothing less. All of the self-study I’ve been whiling away my time with these past several years shows me that everything I’ve heard (or read) Pope Francis say to date squares with the Catechism, the scriptures, the deposit of faith, etc. And he isn’t shy about putting the gospel message out there, either.

Unexpectedly, he has given three interviews in pretty rapid succession. On top of these, he’s giving daily homilies at the chapel at Domus Sanctae Marthae, where he lives, weekly audiences too, and he’s even co-authored an encylical letter already. You’d think from all this bustle of activity that he was experienced at helming ships, and such.

Now, he’s said a few things that have been quite interesting in all of these venues. Much of what he has said has been disarming to me. Just speaking for myself, this is largely because what may seem paradoxical at first is quickly backfilled by recollection of the truth of what he is saying, and a realization of how far I am from practicing the same. All while not rubbing my nose in it.

What follows below are a few excerpts from Saint Thérèse of Lisieux’s autobiography, The Story of a Soul. Have a look at her writings below in light of what Pope Francis has said in the Jesuit publication’s interview, as well as from the dialogue he recently had in La Repubblica. I chose the Little Flower as exemplar because her feast day was yesterday, when the latest interview was published, and because what she says below meshes closely with what Pope Francis is saying today.

Any emphasis in the quotes below is mine.

“I understood this also, that God’s Love is made manifest as well in a simple soul which does not resist His grace as in one more highly endowed. In fact, the characteristic of love being self-abasement, if all souls resembled the holy Doctors who have illuminated the Church, it seems that God in coming to them would not stoop low enough. But He has created the little child, who knows nothing and can but utter feeble cries, and the poor savage who has only the natural law to guide him, and it is to their hearts that He deigns to stoop. These are the field flowers whose simplicity charms Him; and by His condescension to them Our Saviour shows His infinite greatness. As the sun shines both on the cedar and on the floweret, so the Divine Sun illumines every soul, great and small, and all correspond to His care—just as in nature the seasons are so disposed that on the appointed day the humblest daisy shall unfold its petals.”

“See, then, all that Jesus lays claim to from us; He has no need of our works, but only of our love, for the same God who declared He has no need to tell us when He is hungry did not fear to beg for a little water from the Samaritan woman when He was thirsty. But when He said: Give me to drink, it was the love of this poor creature the Creator of the universe was seeking. He was thirsty for love. Ah, I feel it more than ever before. Jesus is parched for he meets only the ungrateful and the indifferent among His disciples in the world, and among his own disciples, alas, he finds few hearts who surrender to him without reservation, who understand the real tenderness of His Infinite Love.”

“I understand now that charity consists in bearing with the faults of others, in not being surprised at their weakness, in being edified by the smallest acts of virtue we see them practice. But I understood above all that charity must not remain hidden in the bottom of the Heart. Jesus has said: “No one lights a lamp and puts it under a bushel basket but upon the lamp-stand so as to give light to ALL in the house.” It seems to be that this lamp represents charity which must enlighten and rejoice not only those who are dearest to us, but All who are in the house without distinction.”

“Apart from the Divine Office, which in spite of my unworthiness is a daily joy, I have not the courage to look through books for beautiful prayers. I only get a headache because of their number, and besides, one is more lovely than another. Unable therefore to say them all, and lost in choice, I do as children who have not learnt to read—I simply tell Our Lord all that I want, and He always understands.

“Dear Mother, since that Infinite Mercy is the subject of this my earthly song, I ought also to discover to you one real advantage, reaped with many others in the discharge of my task. Formerly, if I saw a Sister acting in a way that displeased me, and was seemingly contrary to rule, I would think: “Ah, how glad I should be if only I could warn her and point out where she is wrong.” Since, however, this burden has been laid upon me my ideas have changed, and when I happen to see something not quite right, I say with a sigh of relief: “Thank God! It is not a novice, and I am not obliged to correct”; and at once I try to find excuses, and credit the doer with the good intentions she no doubt possesses.”

“To be Thy Spouse, O my Jesus, to be a daughter of Carmel, and by my union with Thee to be the mother of souls, should not all this content me? And yet other vocations make themselves felt—I feel called to the Priesthood and to the Apostolate—I would be a Martyr, a Doctor of the Church. I should like to accomplish the most heroic deeds—the spirit of the Crusader burns within me, and I long to die on the field of battle in defence of Holy Church.

The vocation of a Priest! With what love, my Jesus, would I bear Thee in my hand, when my words brought Thee down from Heaven! With what love would I give Thee to souls! And yet, while longing to be a Priest, I admire and envy the humility of St. Francis of Assisi, and am drawn to imitate him by refusing the sublime dignity of the Priesthood. How reconcile these opposite tendencies?”

That’s plenty, isn’t it? Compared to what Pope Francis has been saying, and doing, and preaching, etc., it’s enough for me to realize that he doesn’t need Joe Six-Pack hanging on his every word, parsing everything he says, or worrying about his seamanship abilities.

I’m convinced of one more thing. You might even call it a dogmatic belief of mine. Pope Francis is putting the “new” in the New Evangelization.

And for whatever reason, even though he is saying many of the same things, he is being heard in ways that his predecessors were not, by those who are afloat, and ashore.

Advice For All Papal Watchers: Chew Before Swallowing.

Getting Used To My New Papa.

Holy Church: “A Field Hospital for the Wounded.”

Pope Francis Expects So Much More of the Church. 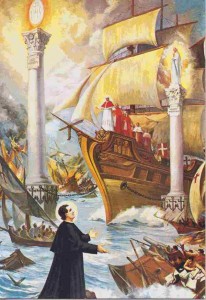 October 2, 2013
This Is My Friend (A Few Words for Wednesday)
Next Post

October 3, 2013 In Search of Pageviews, HUFFPOST Manufactures Clash Between Pope Francis and Pope Benedict?
Recent Comments
12 Comments | Leave a Comment
Browse Our Archives
get the latest from
Catholic
Sign up for our newsletter
POPULAR AT PATHEOS Catholic
1

Listen to the Church, not LifeSite,...
Chaos and Old Night
Related posts from Why I Am Catholic