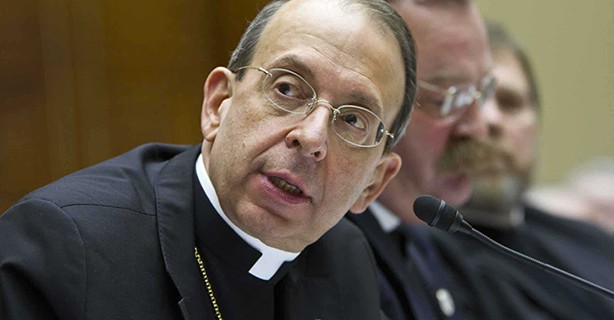 Archbishop William Lori took to the pages of The Baltimore Sun yesterday in an effort to let the peoples’ representatives in the House and Senate, see, hear, and act now to stymie Caesar. Take a look.

Pope Francis recently reaffirmed that religious freedom is “a fundamental human right” and warned against the impulse to “relegate [religions] to the enclosed precincts of churches, synagogues or mosques.” The freedom of religion cannot be reduced to the freedom of worship.

This resonates with the rich tradition of religious liberty in our country, which has long allowed Catholics and other people of faith to live out their beliefs beyond the sanctuary, whether by healing the sick, educating the young or feeding and clothing the poor.

But a mandate of the U.S. Department of Health and Human Services (HHS) now jeopardizes these important ministries — health care, education, and social services — by forcing them to participate in covering drugs and devices that violate Catholic teaching. The mandate was enforced against some ministries beginning January 1.

In order to protect their freedom to serve, many Catholic dioceses and their non-profit ministries took the difficult step of filing federal lawsuits in courts around the country. Most of those results have been encouraging.

For instance, a federal court in Pennsylvania issued an order blocking the government from enforcing the mandate against the Dioceses of Pittsburgh and Erie and their related charitable, religious and educational ministries. The court found that enforcement could result in “decreased donations, loss of employees to other employers, loss of services” and fines that could compel the closure of ministries that greatly benefit their communities. Soon after, a New York federal court granted similar relief on similar grounds. And on Tuesday, Supreme Court Justice Sonia Sotomayor granted a stay in a case brought by the Little Sisters of the Poor, allowing them at least a temporary reprieve from the requirement.

And in burdening that religious exercise, the mandate also harms those we serve, and in turn, the common good. Requiring these non-profits to set aside money to pay these onerous fines may threaten their very existence. In more ways than one, this serves no one.

Caesar, being benevolent, and all knowing, basically told The Little Sisters of the Poor that “it’s just a piece of paper you’re signing; don’t sweat it.” The Denver Catholic Register expands on that below,

The sticking point for both sides is a waiver/authorization form that the Little Sisters must fill out to take advantage of a so-called accommodation for non-profit ministries. The form, however, has a dual purpose—it signals opposition to the mandate, but also authorizes a third-party to provide the services it finds morally objectionable.

“The Little Sisters and other applicants cannot execute the form because they cannot deputize a third party to sin on their behalf,” stated the Becket Fund, which represents the Little Sisters, in a brief responding to the Obama administration. The group added that the administration is “simply blind to the religious exercise at issue.”

The Obama administration minimalized the importance of the form, enticing the Little Sisters to “secure for themselves the relief they seek” …“with the stroke of their own pen.”

Mark Rienzi, senior counsel for the Becket Fund who filed the lawsuit on behalf of the nuns, said in a statement Friday that the administration was “trying to bully nuns into violating their religious beliefs.”

If the sisters don’t sign the waiver/authorization form, or if the courts don’t uphold the injunction, they could be subject to devastating IRS penalties that could add up to millions of dollars a year.

After checking back later with the sisters, who run Mullen Home for the Aged in Denver, Mother Patricia Mary stated, “At this point we are not saying anything. We are just kind of waiting … and continuing to work with the elderly.”

Mother Patricia’s reply reminds me of a passage from the prophet Isaiah,

For thus said the LORD GOD,
the Holy One of Israel:
By waiting and by calm you shall be saved,
in quiet and in trust your strength lies.

Keep praying. While you’re at it, it would probably be a good idea to put a bug in your Congressional representatives ears too. And don’t forget The Becket Fund. Throw some shekels their way if you can spare a few.

Fr. Dwight Longenecker: Henry VIII and the Little Sisters of the Poor.

January 4, 2014
Because the Mandated HHS Rules Strike at the Heart of Freedom
Next Post