Why I Am NOT Leaving the Catholic Church

Five years ago, I became a Catholic. It was Easter Vigil. Beautiful music was sung, holy readings were pronounced and I found myself with four other candidates anxiously standing behind the altar. The moment had arrived. As Fr. Michael approached each of us, he leveled his warm and knowing gaze and swung the smoking thurible in our direction. The sweet smell of incense was potent and delicious. And as the onlooking congregation became obscured by the rising smoke, the beauty of what was happening dawned on me. After years of attending Mass and observing the priest or deacon wave the thurible toward the Holy Gospel or the altar, I found myself transfixed by this ritual. Smoky incense emits from the censer and lilts its way heavenward as a sweet, aromatic supplication – an offering, a gift – to the Lord above. But now, on Easter Vigil, as the thurible swung toward me (once-twice-three times) and I was surrounded by smoke, I finally understood. Tonight, I was the offering. It was one of the most extraordinary moments of my life.

But moments like that didn’t come easily. If you would have asked my wife just a few years before if she could ever conceive of my conversion to Catholicism, her answer would have been a resounding “no”. That’s because for years I approached the Catholic faith with biases and misunderstandings about nearly everything: the role of Mary and the Saints, the primacy of the Pope, the seeming aloofness of the Catholic hierarchy, the exclusivity of Holy Communion, the restriction that priests must be single, celibate men, the emphasis on Tradition, the pervasive sense of guilt outweighing redemption and the obvious priest sex abuse scandal. To speak to each of these misgivings would require a book-length piece (perhaps something for the future…), but I would ask that you read my blogs over the last year and a half which have attempted to speak to these particular issues, what I have come to understand about the Church and why I converted.

However, just because I entered the Church didn’t mean that the imperfections of the Body of Christ ceased to exist. Further sexual abuse has been uncovered, certain Archbishops embezzle or design lavish lifestyles for themselves and Cardinals debating extremely sensitive issues of great moral import resort to name-calling, back-biting unChristian behavior. Lawsuits have been filed. Books have been written. Polemics have been penned. Respected thinkers such as Rod Dreher left Catholicism several years ago while Mark Judge, Michael Coren walked away this year offering very public and honest testimonials (while thoughtful responses have been offered by many including fellow Catholic Patheos colleague Kathy Schiffer) . Negative momentum has been building for a long time. And surely there are many Catholics who are considering that they too should hang it up and walk away.

Here is why I am NOT leaving the Catholic Church.

When British journalist and Catholic convert G.K. Chesterton composed his famous essay, Why I Am A Catholic, he began by simply saying,

“The difficulty of explaining ‘why I am a Catholic’  is that there are ten thousand reasons all amounting to one reason: that Catholicism is true. I could fill all my space with separate sentences each beginning with the words, ‘It is the only thing that…’”

He then goes on to list numerous brilliant reasons for his Catholicism. I completely sympathize with this. The entire reason I write this blog to begin with (from my first essay to my last) is to humbly and self-critically articulate how wrong I was. All the perceptions, insights and criticisms I had of the Catholic Faith before I truly encountered it were just plain wrong. Ironically, these blogs are a testimony to my own ignorance. And as C.S. Lewis remarked on conversion, “Every story of conversion is the story of a blessed defeat.” Each piece I write is one small brushstroke in the ever-unfinished portrait of my unfolding Catholic faith. For me, like Chesterton, there are ten thousand reasons amounting to one reason.

The edifice of Catholicism is Jesus Christ. Countless times, a good friend of mine has “flipped pages”. What he means when he says this is that he has read the Gospel of Mark. Again. And again. And again. Consider doing this just one time. Read the entire book of Mark, only 16 chapters, and ask yourself if you can name anyone in history other than Jesus of Nazareth who has uttered truths about man’s fallibility and dignity, sinfulness and redemption, struggles with fear and anxiety, dependence on faith and hope, grappling with suffering and loss, hunger for calling and purpose, search for origin and destiny and need for justice and mercy. See if you can name a wise man more clear-sighted than Jesus Christ who can teach with clarity, comfort with warmth, heal with miraculous touch, correct with authority and die with selflessness. Christ is the central event of History, the central figure of Faith, the central Truth of existence. This is Christocentrism. This is the Catholic Church.

The revelations of Christ’s life and teachings are embodied in the Gospels, anticipated by man’s walk with God in the Old Testament and reflected on by the Acts and Letters of the New Testament. This Scripture – this Bible – was inspired by the Holy Spirit and assembled by Tradition as defined by the Spirit-led Church Fathers. And the Tradition (that causes consternation for so many) in anticipating the assembly of the Bible and implementing its wisdom in its wake has been a holy jousting, collaborating, discussing, discerning process. Tradition has been an earnest and holy attempt to understand exactly what these teachings mean and how we are to faithfully live them out. Members of this jousting, collaborating group of shepherds have included the likes of St. Augustine, St. Thomas Aquinas, St. Ambrose, St. Jerome, St. Bonaventure, St. Anselm and have further been contributed to by St. Catherine of Siena, St. Therese of Lisieux, St. Teresa of Avila, St. Hildegard of Bingen, to name a simple few.

The edifice of the Catholic Church is Christ – Christ who is revealed through Scripture, further explicated by Tradition and ever-approachable through prayer and worship.

To contemplate the Bible, to explore the Catechism, to read the works of the Church Fathers and Saints and to find further nourishment by minds like Chesterton, Newman, O’Connor, Belloc, Bernanos, Knox, Benedict XVI, de Lubac and Balthasar, (among hundreds and hundreds) is only to scratch the surface of the Truth of Catholicism. To lose yourself in prayer, worship, Confession, Communion or Adoration is to merely dip your toe into the ocean of God that the Church forever points you to.

This Bible, this Catechism, these witnesses and thinkers, these holy experiences – this Truth – this is why I am not leaving the Catholic Church.

But in hearing the news, in considering the hypocrisies or scandals, in witnessing the squabbles and pettiness, in reflecting on the unChrist-like behavior that can fester in members or structures of the Church, surely this is reason enough to leave the Church, isn’t it?

Was Peter a sinner when Christ called him “The Rock” upon which the Church would be built? Was Paul blameless from his moment of conversion? Did the Apostles ever lose their way? Did Church Fathers fight with one another? Did Saints ever squabble? At its root, the Church has two criteria for membership: A belief in Jesus Christ and being a sinner in need of redemption. Put another way, the Church is comprised of hopeful misfits and that includes leaders as well as followers. If Christ had faith in his hopeful misfits, shouldn’t we? Other than Christ and his Church, to whom shall we go? Politicians? Social engineers? Celebrities and athletes? Novelists? Philosophers? Will they be devoid of fallibility? Will they offer a better form of redemption? Will they understand us better?

“The Catholic Church is an institution I am bound to hold divine– but for unbelievers a proof of its divinity might be found in the fact that no merely human institution conducted with such knavish imbecility would have lasted a fortnight.”

But he also said,

“The thing I have to say is this…The Catholic Church is the exponent of REALITY. It is true. Its doctrines in matters large and small are statements of what is.”

“The great strength of Christian sanctity has always been simply this – that the worst enemies of the saints could not say of the saints anything worse than [the saints] said of themselves…Suppose the village atheist had a sudden and splendid impulse to rush into the village church and denounce everybody there as miserable offenders. He might break in at the exact moment when they were saying the same thing themselves.”

“The church is founded on Peter who denied Christ three times and couldn’t walk on water by himself. You are expecting his successors to walk on the water. All human nature vigorously resists grace because grace changes us and the change is painful…Human nature is so faulty that it can resist any amount of grace and most of the time it does. The Church does well to hold her own; you are asking that she show a profit. When she shows a profit, you have a saint.”

“The moon’s light is not its own light but rather, the light of another. It is darkness and brightness at the same time. The moon itself is darkness, but it bestows brightness that comes from another heavenly body whose light it transmits.”

Before I became Catholic, I disdained the Church for many of the reasons that caused people to fall away from the Faith. But to paraphrase Chesterton, I thought I had tried the Catholic Church and found it wanting, when in fact I had found it difficult and left untried. Once I truly opened myself up – opened myself simply to being fair to the Church, to considering the infinite Truths it tenderly cared for in spite of and in the midst of the Church shepherds’ small or glaring imperfections, I realized that the Church is a Truth and a Body unlike any other.

Five years ago, I stood behind the altar at my local church. And as the incense rose all around me, I became Catholic. Why? Because a Perfect God with a Perfect Truth reached me – an imperfect me – through a loving, but imperfect Church. Was it a mistake? Was I duped? Is this all an illusion? Should I just hang it up and leave the Catholic Church?

I am not leaving the Catholic Church.

And I pray that others will do the same.

For more terrific pieces on “Why I Am Catholic”, please see: 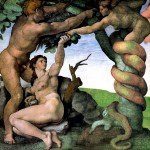 June 3, 2015 On Disbelieving and Believing in the Creation Story
Recent Comments
172 Comments | Leave a Comment
Browse Our Archives
Related posts from A Catholic Thinker