Which foods were offered to the Goddess Hekate during rituals?

Sharing food with friends and family is a natural way of bonding and special celebrations, such as birthdays and religious festivals, have particular foods and drinks associated with it. Many of the foods associated with Hekate were given to her as an offering during religious rites, as part of ceremonies petitioning the Goddess or as part of the much talked about deipna (supper) offered to Hekate at the crossroads on the last day of the lunar month (i.e. the Dark Moon).

Many of the foods linked to Hekate in this way were also offered to other deities or formed part of official religious celebrations. For example water, oil and wine were libated to many of the Gods, and sesame was included in offerings to Artemis.  Other items, such as the Red Mullet fish which was offered to Hekate, seems to be more specific to this goddess usually because the thing has an exceptional quality which somehow links it with qualities also found in the Goddess. For example, another name for Red Mullet is Triglê, with Tri meaning three being a reference to the belief that this fish spawned three times a year.  The fish also had a unique quality of changing to a bright red colour when it was killed, a quality which earned it a place in lavish Roman banquets where it was killed as part of the feast before being cooked (see p.217 of Circle for Hekate, Vol.1).

Many of the foods on this list (first published in Hekate: Her Sacred Fires, 2010) are regional to the regions in which Hekate was worshipped, most formed a part of the diet of the people who lived in the area.  Some were rare and considered a delicacy reserved for those with the money to pay for it (including Triglê) while items were part of the staples most people would have had access to.  With this in mind remember that you can use the food available to you today as offerings, it does not have to be something from the regions in which she was worshipped to be authentic, the doctrine of signatures can help you identify other local foods.  I personally try to grow as many of the offerings I make on my own shrines – flowers, herbs and fruits, in my own garden.  Food is also not the only type of offering you can make to the Goddess,  I personally also offer incense made from resins, oils and woods, and my time.

Also see: Paperboats for the Goddess 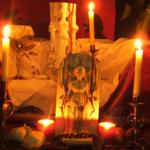 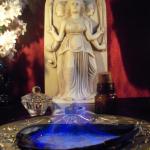