Human Responsibility or "free will" and Romans 7

Human Responsibility or "free will" and Romans 7 November 25, 2004 Adrian Warnock

I hadnt realised just how much discussion around the blogosphere has been generated on the “Free will” issue.

The view from the pew explains and gives theological names to the different opinions on free will. The position he describes that is closest to my own he calls compatibilistic free will.. On the other hand, prosthesis feels as I do that the term “free will” is unhelpful since “it doesn’t have a clear enough meaning and since, in a sense, it is redundant.” Prosthesis goes on to say that the non Christian “is neither able to nor wants to do anything good.” I am afraid I beg to differ on this point. There is no doubt in my mind that many non-christians do more good than many christians. A non-christian is incapable of doing ultimate “spirtual good” but a Christian is often all too capable of misbehaving sometimes to a greater extent than his non-christian friend. This is what some people call the “hypocrisy” of the church. Sadly, what many dont see is that precisely because God chooses some of the worst cases to save, Christians would actually behave even more badly if they themselves were not saved.

Rebecca Writes on “Isaiah 10 and Reconciling Friends” and does a great job of showing how God can be sovereignly in charge of the actions of sinful man.

Clearly our understanding of these kind of passages must leave God free of the charge of being the author of sin, for we know that he is not. Nevertheless, the classic example is of course th cross. The cruelest most sinful act of them all was actually consistant with Gods plan! (See Acts 3).

I want to bring another passage to bear- Romans 7> Now I don’t want to argue about what state this man is in (ie pre-regeneration, post-regeneration but before faith or a believer) but what I want to pull out is the following verses-

Now it seems to me that whatever else this passage is describing it is not describing an entirely unfettered free will. Here an outside influence (in this case the law) comes in and produces in the man an impulse towards sin. We have all experienced this of course- when we see the sign “do not walk on the grass” we find ourselves irresistably drawn to walk on the grass. Did we “choose” at this point to think in this way? I don’t think so! Do we have the responsibility to make a choice whether to go along with sin? Yes we do! But, if a man who has never seen a sign “don’t walk on the grass” doesnt walk on that grass does it automatically make him a better man than the one who saw the sign and walked on the grass anyway? I don’t think so!

In the same way, our wills can be influenced by our surroundings and upbringings, so I am very greatful for the grace I experienced in that department that meant that I was not led away certain sins. I am convinced however that my will if it really was free would lead me into those very sins if it had the chance- there is the root of all sins in me.

Mark 9:42 says “ Whoever causes one of these little ones who believe in me to sin, it would be better for him if a great millstone were hung around his neck and he were thrown into the sea.” Thus, it is possible for an outside influence, in this case a person to CAUSE someone else to sin. How can we then simplistically say we have a totally free will?

November 25, 2004 More on Unconditional election, "double predestination" and the wills of God and man
Browse Our Archives
get the latest updates from
Adrian Warnock
and the Patheos
Evangelical
Channel
POPULAR AT PATHEOS Evangelical
1

What the Bible Says about Old...
Cranach
Books by This Author Books by Adrian Warnock 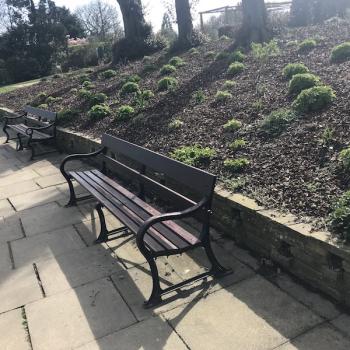