D. Martyn Lloyd-Jones on Preaching the Gospel: “. . . If it is true that where sin abounded grace has much more abounded, well then, “shall we continue in sin, that grace may abound yet further?

First of all, let me make a comment, to me a very important and vital comment. The true preaching of the gospel of salvation by grace alone always leads to the possibility of this charge being brought against it. There is no better test as to whether a man is really preaching the New Testament gospel of salvation than this, that some people might misunderstand it and misinterpret it to mean that it really amounts to this, that because you are saved by grace alone it does not matter at all what you do; you can go on sinning as much as you like because it will redound all the more to the glory of grace. If my preaching and presentation of the gospel of salvation does not expose it to that misunderstanding, then it is not the gospel. Let me show you what I mean.

If a man preaches justification by works, no one would ever raise this question. If a man’s preaching is, “If you want to be Christians, and if you want to go to heaven, you must stop committing sins, you must take up good works, and if you do so regularly and constantly, and do not fail to keep on at it, you will make yourselves. So that misunderstanding could never arise . . . . . .

Nobody has ever brought this charge against the Church of Rome, but it was brought frequently against Martin Luther; indeed that was precisely what the Church of Rome said about the preaching of Martin Luther. They said, “This man who was a priest has changed the doctrine in order to justify his own marriage and his own lust, and so on. This man, they said, “is an antinomian; and that is heresy. That is the very charge they brought against him. It was also brought George Whitfield two hundred years ago. It is the charge that formal dead Christianity if there is such a thing has always brought against this startling, staggering message, that God justifies the ungodly . . .

That is my comment and it is a very important comment for preachers. I would say to all preachers: If your preaching of salvation has not been misunderstood in that way, then you had better examine your sermons again, and you had better make sure that you are really preaching the salvation that is offered in the New Testament to the ungodly, the sinner, to those who are dead in trespasses and sins, to those who are enemies of God. There is this kind of dangerous element about the true presentation of the doctrine of salvation.

HT: David Wayne This is from Lloyd-Jones commentary on Romans 6, pp 8-9, and was quoted by Chuck Swindoll in his book The Grace Awakening, pp. 39-40.

September 23, 2005 Piper on Baptism with the Holy Spirit
Recent Comments
1 Comment | Leave a Comment
Browse Our Archives
get the latest updates from
Adrian Warnock
and the Patheos
Evangelical
Channel
POPULAR AT PATHEOS Evangelical
1

Legalism vs. Freedom vs. Lawlessness
Cranach
Books by This Author Books by Adrian Warnock

Evangelical
What do Acts and Romans say about the...
Adrian Warnock 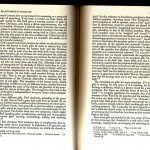 Why I Love Advent
I love Advent. It is the season in the church calendar that...
view all Evangelical blogs
What Are Your Thoughts?leave a comment