Many many thanks to Justin Taylor who in a private email pointed me to an article by Vern Sheridan Poythress. Although bizzarely titled “Modern Spiritual Gifts as Analogous to Apostolic Gifts: Affirming Extraordinary Works of the Spirit within Cessationist Theology” I found next to nothing in this article that I disagreed with. If this article is cessationism then I am a cessationist. To me though it seems to be firmly on the charismatic side of the fence since the article argued for a continuation of gifts of the Holy Spirit.

There is definitely scope for some convergence between the moderate charismatic and the moderate cessationist who I suspect constantly fall into the danger of talking past each other. The article is well worth reading in its entirety and I will quote extensively form it here:

Now let us look for a moment at a tangled debate. People debate about whether prophecy in the New Testament and the early church was divinely inspired and infallible. Did it possess full divine authority? Richard B. Gaffin, Jr., says that it was inspired. Wayne A. Grudem argues that it was not.20 Many people believe that the outcome of this debate is crucial for the future of the charismatic movement. But actually the outcome of the debate makes very little practical difference today.

Suppose Gaffin is right. Then prophecy ceased with the completion of the apostolic era and the completion of the canon of Scripture. Modern phenomena are fallible and hence are not identical with New Testament prophecy. But modern nondiscursive processes with teaching content is analogous to prophecy, just as modern preaching is analogous to apostolic preaching. Hence the general principles concerning spiritual gifts, as articulated in 1 Cor 12-14 and elsewhere, are still applicable. What charismatics call prophecy is not really the prophecy mentioned in the New Testament. Rather, it is a fallible analogue. It is really a spiritual gift for speaking fallibly through nondiscursive processes. It contrasts with preaching, which is a spiritual gift for speaking fallibly through discursive processes.

On the other hand, suppose that Grudem is right. Then prophecy continues. But such prophecy is fallible. It is not identical with the inspired prophecy of the Old Testament. It is in fact a spiritual gift for speaking fallibly through nondiscursive processes. If the content is biblical, its authority derives from the Bible. If the content is circumstantial, it is not an addition to the Bible (not divinely authoritative). Hence it is just information and has no special authority. Hence Grudem ends up with substantially the same practical conclusions as does Gaffin.

Both Gaffin and Grudem already acknowledge the fallibility of the modern phenomena. Gaffin needs only to take the additional step of integrating the modern phenomena into a theology of spiritual gifts. Given this theological integration, we find that there is an analogical justification for the use of these gifts in the church today.

Grudem, on the other hand, needs only to clarify the status of prophecy. Prophecy, he says, is fallible, but still revelatory. It still derives from God, and still is important for the well-being of the church. Gaffin and many others find this sort of description difficult to grasp or classify. How can something be revelatory and still not compete with the sufficiency of Scripture? I explain how partly by distinguishing teaching content from circumstantial content. Teaching content must not add to Scripture, but can only rephrase what is already there in Scripture. Circumstantial content has the same status as information received through a long-distance telephone call that is, it has no special claim to authority. It is therefore obvious that neither type of content threatens the sufficiency of Scripture.

December 8, 2005
The challenge remains out there: show me a single bible verse or passage that supports cessationism
Next Post

December 10, 2005 Al Mohler gives Narnia the thumbs up!
Recent Comments
59 Comments | Leave a Comment
Browse Our Archives
get the latest updates from
Adrian Warnock
and the Patheos
Evangelical
Channel
POPULAR AT PATHEOS Evangelical
1 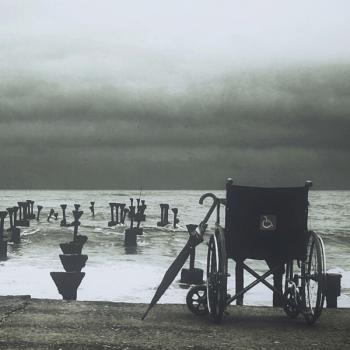 The Infrastructure Bill Would Turn America into a...
Most criticisms of President Biden's $3.5 trillion social infrastructure plan focus on...
view all Evangelical blogs
What Are Your Thoughts?leave a comment