Reconciliation and the role of people of faith 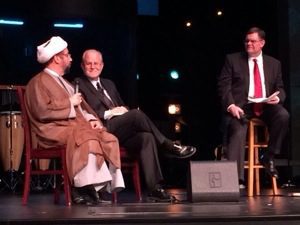 The Ayatollah explained that he is now an American citizen and feels like he has Iran as a mother, and America as a father, but that they are not getting on well at the moment. He feels his role is to try and be a bridge of understanding between the two.

Many Jews want peace with Iran. Tom Dine, a leading Jew stated that his view was that Iranians and Jewish people had a long history of thousands of years of peaceful interaction and the current tension was a new thing that needed to be reversed to the “normal” situation.

Rashad Hussain shared some of the things Muslims agree with Christians on about Jesus. He explained that policy decisions are often misunderstood and that it is these that lead to some of the tension between people of different faiths. He explained that many in the Middle East when they hear only about some church in the USA wanting to burn some Quran’s, as that is all they know they assume all American Christians feel like that.  In the same way some Americans think that all Muslims support acts like 911.

Bombs and bullets have their place, but more often than not they exacerbate the problem and fuel more terrorism. We must deal with the ideas behind the bombs. We have to build relationships. People of faith need to engage with each other. Also its important to show how faith is misused to promote war and tension.

The peace of the world is going to depend on people who as leaders can help to diffuse the masses of people who have fear and anger, in all communities.  Relationships build trust. With trust you can solve anything.  Peace is not just the absence of conflict its the presence of harmony.

We can break down barriers and build relationships one person at a time.

Towards the end the Ayatollah talked about not just inter-faith tensions but intra-faith tensions.  One thing that is not often admitted is that even people of the same faith can sometimes struggle to listen to each other and have a good realationship with each other.

It is such a simple idea that we should build good relationships with others who are not like us without compromising our beliefs, and without pretending we agree. But it is an idea that could change the world politically.  At the end of the day politicians respond to public opinion. The work of thousands of ordinary people can help to shape that public opinion.

Reconciliation can only be achieved between human beings. Religion and culture interact and make people different. We have to learn to understand each other. 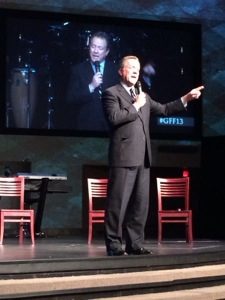 GOVERNOR DAVID BEASLEY gave a conclusion saying we should look for a person with a good heart to bless. Not someone who thinks the same as us. Jesus teaches us to love our enemy. He was a Jewish rabbi. Some people see him just as a man. But his teaching was remarkable. He taught us how to reconcile with others. He told us to love our enemy. And he reconciled God and man. If people were to actually follow the teachings of Jesus and to treat others as you’d like to be treated, to love your neighbor the world would be a different place.

Sitting men down who hate each other and eat food together, look in each others eyes and have fellowship together, amazing things happen.

Blessed are the peacemakers. 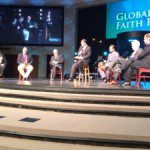 November 16, 2013 People of faith reaching out to serve the community
Recent Comments
0 | Leave a Comment
Browse Our Archives
Follow Us!

Evangelical
The Christian and the Internet - Opportunities and...
Adrian Warnock