The online discussion of the charismatic gifts continues. I encourage everyone to watch my discussion with Steve Camp who is a friend of John MacArthur, and also to listen to the formal debate below between Michael Brown and Sam Waldron.

I think anyone watching both of these interactions will be forced to conclude at a minimum that some charismatics clearly have a strong biblical argument. I’m not expecting every cessationist to convert. Rather that we can all learn mutual respect. I love the way both these videos demonstrate gracious interactions from all participants.

But despite the winsomeness in which this was approached, I was shocked by Waldron’s answer to Brown’s question, “Can you point to any text of the New Testament where we’re told to stop prophesying?” He replied honestly something like, “I don’t need to. Because we don’t only base doctrine on the explicit teaching of Scripture, but on reasonable deductions from Scripture.” I feel once we get to pick and chose which bits of the New Testament we are going to obey, we have undermined fatally the Sufficiency of Scripture.

Imagine if you will that I and my charismatic friends are wrong. Will Jesus really reject us? Or will he say, “My dear children, in your enthusiasm to follow me you took literally some parts of the Bible I didn’t intend you to.” For the cessationists, I trust that Jesus will also graciously accept them, but can you imagine him saying, if they have got this issue wrong, “My dear children, I taught you clearly in my word, and you created a human argument to protect my precious Word which needs no such protection!”

Anyway, I am not wanting to be offensive to my cessationist brothers and sisters, after all it was Strange Fire that prompted this whole debate. But for me this debate below should put pay once and for all to the idea that we are not biblically rooted: 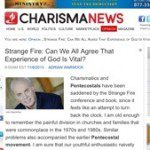 Christianity vs. Christendom?
Cranach
Books by This Author Books by Adrian Warnock

Evangelical
How not to hear "away from me I...
Adrian Warnock
TRENDING AT PATHEOS Evangelical