What is relational Christianity?

When I was just four I became a part of a family of churches that was subsequently called Newfrontiers. Terry Virgo was the founder of that group. One of our rallying calls was a call to “relational Christianity.” This call is as relevant now as it has ever been. A few days ago Terry posted a couple of tweets about this:

You are welcome to church life shaped & formatted by business psychology and procedure. I prize brotherly love and comradeship always!

Non-relational Christianity is not only unpleasant, it is also totally foreign to the New Testament.

I immediately knew what he meant. But it struck me suddenly how this concept is something that I am in danger of taking for granted. It’s also something that is open for misunderstanding, and even for misapplication. So, I have started a stream of tweets about it. I’d love for you to suggest further additions in the comments section or on Twitter.

Here are my bite-size comments on relational Christianity:

One of the delights of my life is being part of Jubilee Church that is seeking to embody these ideas.  We are an international family together for a purpose. And we have a lot of fun along the way.  This was well demonstrated in our recent International Day. I will close this post by embedding a video from that day, and you can see more here and here. 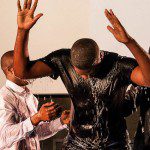 June 4, 2014 The heavens declare the glory of God. The sky above proclaims his handiwork
Recent Comments
12 Comments | Leave a Comment
"Faith is what has the Hindus believing their deities exist & allows the Sikhs to ..."
C Nault Three Phases of Faith
"Well if Trump had not insisted the US leave the WHO they could have been ..."
Realist1234 Are COVID-19 vaccines made from aborted ..."
"Is that market still going? Has there been a thorough investigation? The US needs to ..."
Guthrum Are COVID-19 vaccines made from aborted ..."
"Yes. You have to be crazy to create such things if the intent is to ..."
Realist1234 Are COVID-19 vaccines made from aborted ..."
Browse Our Archives
get the latest from
Adrian Warnock
Sign up for our newsletter
POPULAR AT PATHEOS Evangelical
1

Church Should Be Your Excuse for...
The Chorus In The Chaos
Books by This Author Books by Adrian Warnock

Review of "Tongue-Tied: Learning the Lost Art of...
Sara Wenger Shenk was president of Anabaptist Mennonite Biblical Seminary in Elkhart,...

The Institutions Americans No Longer Believe In
A major business leader is bullish about the American economy in the...

Craig's Atonement and the Death of Christ--- Part...
Q. I wonder if it would help the discussion of penal substitutionary...
view all Evangelical blogs
What Are Your Thoughts?leave a comment
Copyright 2008-2021, Patheos. All rights reserved.