Hearth of Hellenism: Polytheism In the Office

“I do not hide my religion at work. While it can be hard to be a polytheist in a sea of monotheists, I have a simple method of dealing with them. I do not normalize monotheism and position polytheism as the norm.”

I want to share some of my experiences as an open polytheist out and about in the world. Most of my experiences worth sharing happen in the workplace because I somehow always get involved in conversations concerning religion. Yes, it is often ill-advised to talk about religion at work, but that has never stopped me nor have any repercussions be dealt. Being Greek helps in these encounters and gives me confidence when speaking to them. I am a Greek who worships the Greek pantheon. There is nothing weird about that, they know it, they even acknowledge it. They do take me seriously, because through my explanations (in one example below you will see) they are forced to put me in the same mental category as a Hindu for example.

One of the reasons things occur in the workplace happens because others open the door to the topic and I just jump in to drop bombs lol. It was Ash Wednesday, and a group of us were having a catered lunch. Because it was a religious holiday for those observing in the office, religion was on the mind of people. Someone said something about how horrible, and how could a priest steal from his parish. I commented, “when you have a professional class of clergy, whose livelihood is depended on the job of being a priest, don’t be shocked if they steal from the community that is their sole source of income. In the old days, of Greece and Rome – most priests were only priests during their religious duties and held normal jobs or trades.” I wish you were there for this because the silence and looks were hysterical – they could not reply or think of anything smart to say, one person made a dumb remark and the conversation moved on.

Another time while I was moving between departments as I sometimes do to visit and chat with others, I joined a circle of people to catch up. During the conversation, one of the senior managers said something and mentioned God in it. My reaction every time when someone says God is to ask “which god?” I will ask it in a confused tone. My basic position when dealing with monotheism is to act like it is not the normative and that the idea of only one god is strange. This throws people off so fast. When I asked him, “which god” he spat back real fast with such confidence “there’s only one god.” His face projected the “what the fuck are you talking about” look. I then asked again, “which god” and that “there are many gods in the world, I am Greek, I have many gods, and the lady over there who works for you is a Hindu, she has many gods as well, maybe you are talking about Apollo or Shiva?” He was dumbfounded. Monotheists need to be reminded that yes polytheists exist, and I will not placate.

One of my favorite experiences at work was with a Greek woman. She is an Orthodox Christian. This was right after Greek independence which happened to be my name day (the feast day of a saint after whom a person is named). She wished me a happy name day, to which I said, “thank you, but I do not celebrate my name day anymore.” She thought I was an atheist, but I explained to her my religion is ethnikos, the term we use to describe Greek religion in Greek. She gave a nod and an Ok, then at the end of the conversation, since Easter was nearing, she wished me a Kalo Pascha (Happy Easter) which I just died laughing inside. I just told her I am ethnikos 3 minutes ago and is too programmed to still say Kalo Pascha to another Greek.

The icing on the cake of all experiences has come from one of the guys in the mailroom who has become born again or something. He found Jesus apparently (where was he hiding?). We have had multiple conversations. I am openly polytheistic and talked to him about my religion. I told him my religion is Hellenism, “HELL?!” he said in horror. I then said it in Greek, never use the English pronunciation with Christians. I explained that my religion has many gods. He said that there is only one god. I said, “YOU may think there is only one, but my ancestors did not hold that positions nor do I. I have no reason to think there is one god. Where in nature do you see only one of something? This world expresses multiplicity. There are many trees, not one tree or one type of tree. Why should divinity be any different, it is logical to assume the multiplicity of the divine rather than a singularity and only a singularity.” I can’t recall his response, it was not worthy of a place in memory.

Other encounters with him have led him to ask questions that one would usually propose to an atheist. “How did we get here then?” “Who created all of this?” I had to remind him that I am a theist, a POLY-theist, so don’t ask questions that you ask an atheist. I have a cosmology different from you, full of gods, but I also have no issue with the scientific explanations. My religion is not in conflict with science like yours is. The funniest interaction with him was when he told me “Hindus have this god with many arms and a snake, wouldn’t you be sacred if you woke up to see that at the foot of the bed?” I said, “no, I’d be more afraid to see a crucified man at the foot of my bed.”

In the end, my goal is simple, do not normalize monotheism. Everything about it should be considered strange, odd, and deviate from what has historically been normative in the history of religion, which is polytheism. Monotheists need constant reminders that polytheists exist, and I am not afraid to be the one to remind them. 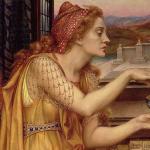 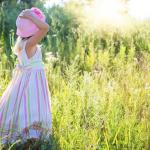 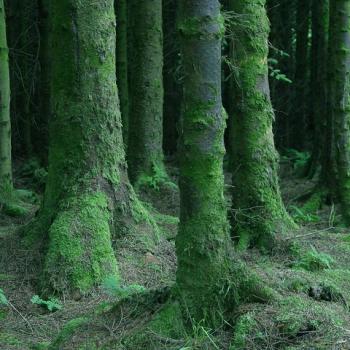 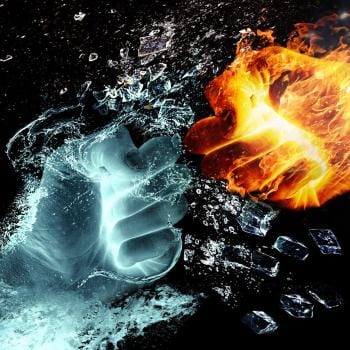 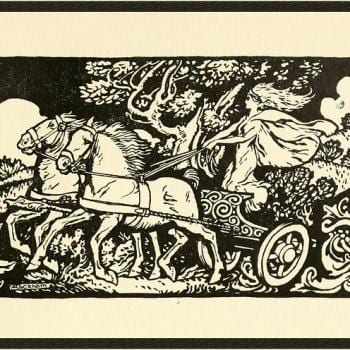 Pagan
Pan-Celtic Hoofbeats: The Dagda is Not Zeus!
Agora
TRENDING AT PATHEOS Pagan