Before we begin – I’ve had three Pagan Tea Times so far, and they were all great. The first was one put on by John Beckett and Jason Mankey, a group chat that was super fun to be part of. I also met with Christine Kraemer, our editor here at Patheos Pagan, and had a great chat about all sorts of topic, including gender in Paganism. I also met with David Dashifen Kees, which was awesome because he’s a techie (I love tech, but I am not knowledgeable enough to do it like David does). He was oodles of fun to talk to (and also in the group chat earlier this month).

If you want to set up a time to have a chat or hangout on Google+, just shoot me an email or message on Facebook!

Every Friday, in the ‘Musings’ series, we’ll be exploring in-depth or complex topics related to the Otherfaith and our gods. These will be wandering, wondering posts, and not presented in any expected order – they are entirely based on events or occurrences that happened during the week.

This Friday, we’re focusing on the concept of written words in the Otherfaith.

I love writing. That should be obvious from my maintaining a variety of blogs, as well as the many handwritten journals I keep. Writing has always been an important part of my life.

It’s important to the faith, too.

The Otherfaith isn’t an oral tradition – being born in the time of technology and internet, it is, by necessity, very much worded. There are, of course, parts that can only be taught through the touch of another person, through seeing how someone moves in the world and in ritual. But we originated through text, through online communication and ideas, and text is vital to us.

That’s part of the reason I have so many dang journals – that, and having to write on my arms is not an experience I wish to repeat frequently. Recently, I’ve begun working on one of fancy journals I procured, and working on putting details in it has caused me to analyze what is important to put in.

There are a lot of stories I want to tell – about the gods, about their spirits, about their relationship to us. And there are the stories about how the Otherfaith came to be that are important to tell, as well as where we are going.

Our discussion groups every month are held through Skype text chat, and while very different from video chats I’ve had, it is still awesome to have a bunch of people chatting. As the faith grows, I hope to set up forums, and I hope to have more contributors to the Otherfaith blog – all which is text based.

That isn’t just it, though – the Clarene is our librarian, our cultivator of language (in journeys to her, I’ve heard her use both non-human language, as well as French, German, and English), and the shrine I recently erected for her is in the middle of my bookshelf. We have a whole group of spirits dedicated to overseeing books and literature – the Book-Keepers – who are tasked with organizing the books in their charge. There are spirits born directly from books, or from the scribbling of a word – Epiphia, the daughter of Epiphany, is an example of that.

And some ideas, some religious truths, can’t be understood until I’ve written them down. It was only with playing with the names and words associated with the Laetha that I came to understand more of his nature, more of his many spirits and genders and voices. While there is plenty I can’t teach through text – journeying, mystical work in the faith – there is so much I can. It was through writing that I’ve shown people the faith, and it was through writing I found other people who knew or wanted to know these gods. That, I think, is a gift I cannot undervalue. 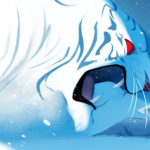 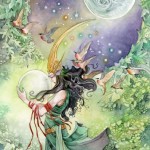 February 24, 2014 Monday Tarot: the World
Recent Comments
0 | Leave a Comment
"Well said, Aine.My local zendo is closed, but I'm trying to apply the lessons I ..."
Lo The Despair of Doing Nothing
"Thank you! I'm glad you liked it."
Aine Pop Culture and Paganism
"Thanks so much for addressing this! Great post!"
Kris Hughes Pop Culture and Paganism
"Glad to see you back, great post. I’m not from otherfaith but created my own ..."
R. V. ‘Dalliances with Deities’ Opens Again
Browse Our Archives
Follow Us!