An Open Letter to the Priest With the Worst Liturgy Ever

An Open Letter to the Priest With the Worst Liturgy Ever July 1, 2019 K. Albert Little

A liturgist that I respect very much once said something to the effect that a good priest, who respects the Liturgy of the Mass, should never insert himself into it. Instead, a good priest acts in the background of the Liturgy. He performs the various components: the prayers, the rites, and even the homily, without being an overwhelming presence. Without taking over.

I wondered aloud, when I first heard this comment, what that might look like. What might it look like for a priest to insert himself into the liturgy; overwhelm the liturgy to such a degree that it almost loses its meaning. That it strains to be about Jesus, about the sacrifice of the cross and the last supper, and becomes about something else.

Like, say, a crappy stand-up comedy routine. And now I know.

We were recently out of town visiting family. On Sunday morning, my son and packed into the car and drove to the closest Catholic church for Mass. We were greeted warmly, which was nice, because this can sometimes be rare in Catholic parishes but almost as soon as the Mass began we knew something sinister was up.

This wouldn’t be a normal Mass; this was going to be Father So-And-So’s Summer Stand-Up Tour 2019. And the jokes would not be good.

It began when four families were called up to have their children baptized. “You’re going to get some water poured on you,” Father said, chuckling, and then proceeded to ask for the name of each child being baptized. What would be, under liturgical or even reasonable norms, a simple exchange, went a bit like this.

“What’s your name?” asked Father in a tone of mock incredulity.

“Violet,” the nervous girl whispered in the microphone.

“Speak up!” Father demanded, again in a tone of mock rage which drew laughs from the half-empty church.

“Do you know what Violet means?” Father asked, underscoring his sardonic tone with a penetrating glare.

The girl paused, shaking her head.

“It means flower,” Father said, finally. Laughter erupting from pockets of people in the pews.

The name-based comedy continued for five full minutes while father asked for the name of each child, siblings included, and made a similarly bad joke for each.

The laser-like focus on Christ in the Mass continued when father began to read the necessary responses for the Rite of Baptism.

Having had two children baptized and having studied the rite in no small detail I was familiar with the beautiful poetry and power of these prayers. You are, as parents, committing this child to Christ in a very meaningful way. You are committing, as parents and godparents, to raise this child in the mantle of the Church and to nurture and carefully tend the garden of their faith as it grows.

My wife and I are both converts and at the baptism of our son, a foreign experience for our mostly Protestant friends and family, many remarked at how intentional and beautiful and holy the prayers and responses were. They were moved and many remarked on it.

“When I ask you the next question,” said father as he continued, “Just say ‘We do,” it doesn’t matter.”

As the rite concluded and Mass continued to unfold I stopped counting the number of bald-faced liturgical abuses when it approached two dozen.

When father rose to give his homily he remarked, “It wasn’t my turn to preach, it was supposed to be the deacon’s and I don’t want to do this so you’re lucky; this’ll be the unofficial start to my five-minute summer homily series.”

Because the point of a homily is to be as short as possible so we can all get out the door?

Because surely there are no Catholics in attendance that enjoy learning something about the Sunday readings beyond, say, what the priest can think of off the top of his head (turns out that’s what the homily was anyway).

I had to psychologically detach myself from my circumstances when all the children in the congregation were called forward to hold hands and dance around the altar during the Lord’s Prayer.

Not wanting to embarrass my son, who didn’t know all the coordinated dance moves, I kindly asked him to stay in his seat with me.

When we left church after Mass I felt a certain sinking feeling and it stayed with me all day long. A feeling that what I had just witnessed wouldn’t properly be called a Mass at all. What I hauled my son to on that Sunday morning was, instead, the priest’s weekly ego trip. And, yeah, I’m a bit cheesed off as a result.

What the good liturgist said, what I began by saying, is fundamentally true.

As a priest—and good priests know this—you are the servant of the liturgy. You serve it, as a vehicle of the Church given to us by Christ, and not the other way around. You do not—you should not—be so up front in the liturgy as to complete overwhelm it. So as to make it your own. Because in that you do all of us a disservice: yourself, us, and most importantly, Christ.

This is what truly broke my heart.

Statistics show, plainly, that Catholics are leaving the faith in droves. One reasonably wonders why and through valuable research the answers are slowly become apparent. One reason, among the main, is the lack of religious foundation on the part of parishes and parents. Baptized, confirmed Catholics simply aren’t having the faith modelled for them; they aren’t learning the faith apart from the rites and rituals they must endure on, say, a Sunday morning.

Is this beginning to sound familiar?

Because here is a thing where children and their families are they’re told, at every turn, to “just say what I say,” or “repeat this, it doesn’t matter,” or are subjected to father’s bad and unnecessary jokes. And do those children and their families walk away with a greater understanding of what’s just taken place? A deeper understanding and appreciation for the incredible, grace-giving gift of baptism which has indelibly marked their child’s soul?

Or the sense that that was a nice, and funny, priest who performed a ceremony—I hope he’s still around in 10 years for our confirmation, if we want to do that kind of thing.

I think the answer is obvious.

And here’s the rub.

A priest performing a liturgy is this might think they’re are doing the Church, their parishioners, and Christ’s message a service with silly jokes, a feigned sense of incredulity, and arcasm and wit but the only thing being served is themselves.

And, plainly, silliness like this, blinding abuses of the liturgy like what I witnessed, do not improve the message and mission of Christ and His Church—they are a hinderance, on a massive scale.

Instead of understanding the seriousness, solemnity, and (God help us!) beauty of the Mass a congregation is instead being given a water-down comedy show with bits of ritual sprinkled in at every turn not to underscored in their importance, but massively down-played.

As if what matters here is that we’re all having fun and not asking too much of each other, not that we’re being transformed into the likeness of God. That we’re called to something greater than a lame joke about how slow the extraordinary ministers of Communion are being when called up to the altar.

And it is those children, exactly those children, and their families whose experience of Catholicism is a watered-down, hoop-to-jump-through, comedy show of a thing that walk away from the faith never having understood it in the first place. Because a misguided priest failed at his job; because he thought that stoking his own ego, that putting people at ease with his jokes, was more important than offering the liturgy which the Church tells us is ultimately live-giving.

I know, I’m being harsh, but seriously.

At the end of the day I think I get it. Jokes are disarming and I too am a naturally sarcastic person but there is a time and a place and it is not at every opportunity and during the Mass. Sure, parishioners were put at ease by father’s easygoing attitude, but personally, I would not want to be attended by a first responder who pulled up to my car accident, cracked open a beer, and said, “Well, you’ve sure made a mess of things.” 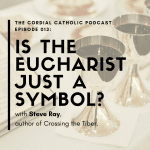 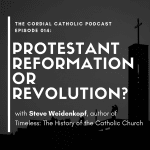 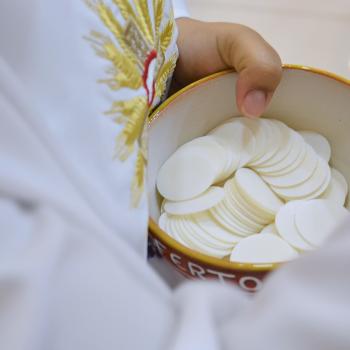 Catholic
How to Debate an Evangelical on the Eucharist......
The Cordial Catholic 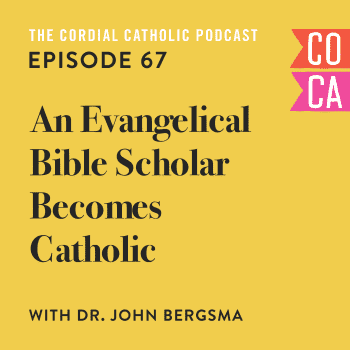 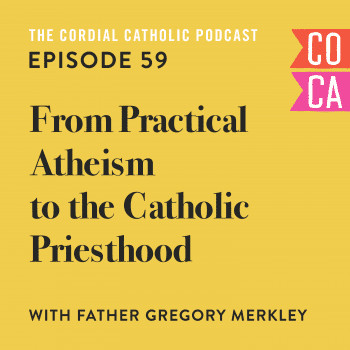