Yesterday, I initiated a conversation with my 13 year-old son about what he believes happens after death and why evil exists in the world.

Let me preface this by explaining why.this is not an unusual conversation for us.  I haven’t written much here about my kids yet.  Today, I’m going to tell you a little about my son.  He has always been a little precocious, and he took a keen interest in theology at a young age.  At age 8, when it came time for him to be baptized in the Mormon church, he had to be interviewed by the Mormon pastor (what Mormons call a “bishop”).  Part of the interview is reviewing some very basic Mormon dogma.  But my son didn’t get past the first question.  You see, my son had decided that God the Father and Jesus Christ were the same person.  But Mormons believe they are separate individuals.  My son informed the bishop what he believed, probably naively expecting the bishop to be as open-minded as his parents.  The bishop proceeded to correct my son, probably naively thinking the matter would thereby be settled.  He went on believing what he wanted for several years, until he realized that the Mormon church actually expected him to conform his beliefs to their dogma.

Anyway, when I asked him yesterday what he thought was going to happen to our family after death, he proceeded to give me the Mormon “party line”: He and his sister and his mother were going to the “Celestial Kingdom”, the third and highest degree of glory in the Mormon heaven, reserved for good Mormons; but I was going to the “Terrestrial Kingdom” the second highest degree, reserved for other good people.  Mormons believe that everyone will come around in the end, so everyone goes to one degree of heaven or another.  The lowest degree is for people who were really bad, but repented after they died.  (There is another place for Judas Iscariot et al., called “Outer Darkness”, but very few go there.)  My son told me that he could visit me in the Terrestrial Kingdom, but I could not visit him  — because it would be too bright for me there.

Now you might think this would disturb me.  It really didn’t.  I mean, I already knew what Mormon doctrine is.  And I was pleased my son thought I was a good enough person to make it to the second degree of heaven.  I was also pleased that he didn’t patronize me, like most Mormons would, by suggesting that one day I might convert back to Mormonism.  My son respected my choice, recognized it as something more than a mistake, and that pleased me.

What surprised me was what he went on to say.  After laying out for me the geography of heaven as Mormons teach it, he then told me that he is actually really struggling with believing in an afterlife and that he is quite disturbed by the possibility that we may cease to exist one day.  He described it as being like a zombie to zombie — dead and mindless to the second degree.  And then he began to wonder aloud what the meaning of it all is if we just disappear.  By this time, he was almost in tears.

You see what I mean about him being precocious.  On the one hand, he’s laying out the Truth for me as it has been taught to him, but on the other he is really wrestling with some of the most fundamental questions of life.  I am proud of him that he can even ask these questions at this point in his life, rather than just retreating into dogmatism.

I actually saw this coming a few weeks back.  My son has always been very interested in science.  For Christmas, I gave him a DVD of a NOVA series called The Fabric of the Cosmos.  It’s a four part series about the relatively of space and time, quantum mechanics, and multiple dimensions.  It’s heady stuff.  My son eats that stuff up, and he insisted the whole family watch it again with him.  When my wife and I suggested that a lot of what is described is highly theoretical, he became agitated.  It was then that I realized that my son’s true religion is not Mormonism, but science.

I told him my son, if he ceases to exist, it won’t matter to him because he won’t being experiencing it.  Extinction is not like waking up in a dark room.  It’s like not waking up at all.  But this did not pacify him, of course.  Extinction is still terrifying.  In fact, I’ve been wrestling with it myself several times in this blog.  So I just sympathized with him, and I paraphrased Carl Sagan’s quote:

The world is so exquisite with so much love and moral depth, that there is no reason to deceive ourselves with pretty stories for which there’s little good evidence. Far better it seems to me, in our vulnerability, is to look death in the eye and to be grateful every day for the brief but magnificent opportunity that life provides.

I don’t think he felt any better after we talked.  If he did, it was because I had listened and he was able to talk about it, and not because he found my “answers” satisfying.  I wish I had more to offer him.  But if I did, I’d probably make me the founder of the world’s next a great religion.  In the end, this was all I have to offer:  W. H. Auden wrote:

“When one has great gifts, what answer to the meaning of existence should one require beyond the right to exercise them?”

And we all have great gifts. 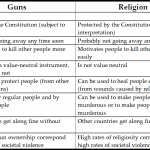 Pagan
Guns or Religion? The Danger of Simple Answers
The Allergic Pagan