“I am become the Sun …”: What Baby Jesus means to this Pagan

We are all meant to be mothers of God. …  For God is always needing to be born. — Meister Eckhart

Christmas morning, my wife and I had a Christmas devotional with our two kids, ages 11 and 14.  If you’re not familiar with my story, I should tell you that I’m Pagan, my wife is Mormon, my son recently declared himself an atheist, and my daughter is, I think, just trying to survive in this crazy family she has been born into.  This past week, we had a Pagan winter solstice celebration, then attended a Mormon service on Sunday, a Unitarian vespers service on Christmas Eve, followed by a Catholic midnight mass.  Then we had our Christmas devotional yesterday morning.  We then headed to my non-religious brother’s house to spend Christmas day, which is fortunate because I think my kids really appreciated a little time in a religion-free zone.

As part of our Christmas devotional, we each shared what Jesus means to us.  You might think that, as a Pagan, I would have nothing to share.  I’ve told my kids in the past that, for some Pagans, Jesus is an example of the Child of Promise that is born at the winter solstice and grows up to become the Oak King, who defeats the powers of darkness, in the form of the Holly King, at the spring equinox, and is later defeated by him in turn and sacrificed at the fall equinox, only to be reborn again at the next winter solstice.   But I have a more personal story of what Jesus means to me, which is what I shared with my kids yesterday morning.

I was raised Mormon, but unlike many Mormons, I never really developed a relationship with Jesus.  When I left the Mormon church, I felt like I was leaping into a dark void.  I had no belief system to replace the Mormon faith I was rejecting.  It was frightening and disorienting.  It felt like a little death.  I needing something desperately, but I really was not looking for a new religion.  In fact, I had a pretty negative attitude about organized religion in general.  Instead, I turned to art.  Without really realizing what I was doing, I began looking for artwork that resonated with the deep part of me that was longing for something.  One of the first images that really had a profound impact on me was William Adolphe-Bouguereau’s Virgin and Child (1888).  I bought a reproduction of the painting, framed it, and hung it in our small apartment.

It may seem strange that I would embrace one of the most archetypal images of Catholicism while simultaneously rejecting organized religion.  By way of background, I should explain that Mormons do not revere Mary.  Mormons do believe that God the Father is married to a Heavenly Mother, but they are forbidden from praying to Her and discouraged from talking about Her.  So I had the longing for connection with the Divine Feminine, but the longing remaining unsatisfied while I was Mormon.  I didn’t realize it at the time, but I think I was drawn to Bouguereau’s painting because of this longing.

Gradually, over time, I came to embrace the dark abyss — the groundlessness, the unknowing — that I had leapt into when I left Mormonism.  Or perhaps it embraced me.  She embraced me.  For did I come to recognize the darkness as the Goddess — not the cold darkness of hell, but the warm darkness of the womb.  She opened to me “the dark soft places deep as between the stars” (D.H. Lawrence), and I found rest in a place like the dark folds of Mary’s robe in Bouguereau’s painting.   And in that place, something new was gestating: a new sense of self, a new perspective on the world, and a new religious vision … which I later came to call “Paganism”.

This new life grew out of the dark void like the Christ Child in Bouguereau’s painting.  The Bright Son of the Night was born through me.  It felt like the Epiphany!

With Frater Achad, I would later come to pray:

Tall and straight as a Fox Glove do I stand before Thee, Mother of Heaven.

The flower of my being is given over to a strange conceit; I grow up towards the Stars and not towards the Sun.

Art thou not Mother of the Sun?

I have blasphemed the Lord and Giver of Life for Thy sake.  Yet I am not ashamed, for in forgetting the Sun I am become the Sun — Thy Son …

As surely as a part of me died when I left Mormonism, something new was born inside of me, which eventually flowered into my Pagan faith.  I realize now that I latched on to Bouguereau’s painting as an unconscious expression of what I was experiencing internally.  So as I gathered with my family this past Christmas morning, I felt no conflict in telling my children that the eternal birth of the Divine Son did take place … one long dark night in my own soul. 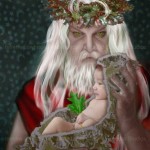 December 31, 2013 The Year in Review: Blog posts that should have gotten more attention (Part 1)
Recent Comments
4 Comments | Leave a Comment
"Ironically, the pagans have stumbled upon evidence that there will be an Armageddon exactly when ..."
The Penitent Man Shall Pass Call for a Pagan Community Statement ..."
"John H.Halstead...Someone wrote or said. Be the change you want to see in the world. ..."
Toni Stamps 13 Things You Don’t Need to ..."
""petty and defensive"?: "Are you foolish enough to think christianity is the elder?""
John H Halstead 13 Things You Don’t Need to ..."
"Attack? This isn't my faith :)Is it yours? You come accross more christian....petty and defensive."
Toni Stamps 13 Things You Don’t Need to ..."
Browse Our Archives
get the latest from
Pagan
Sign up for our newsletter
POPULAR AT PATHEOS Pagan
1