This past Sunday, in the morning “Sprit Circle” discussion group at my local Unitarian church, we watched the introduction to the PBS documentary Beyond Our Differences.  The movie explores “the fundamental unity of the worlds religions”.  It features interviews with the Dalai Lama, Archbishop Desmond Tutu, Karen Armstrong, Deepak Chopra and dozens of other religious leaders and authors.

I took issue with the premise from the start.  And I shared my recent experience trying to understand devotional polytheism.  I explained how had started out trying to find the similarities between my experiences and beliefs and those of devotional polytheists.  What I did not see right away was that I was not even trying to understand polytheists in their own terms.  Their “otherness” made me uncomfortable, and so I tried (unconsciously) to reduce their différance, to make them more like me in my own mind.  I tried to interpret their words to fit my own comfortable categories.  And so I failed to really understand them.

A friend of mine offered a great analogy during the Spirit Circle discussion.  He explained that he grew up on the Northwest, and when he went to the coast, he saw that the ocean was turbulent and cold, the beach rocky and hard.  Later in his life, he visited Florida and was shocked to experience a different ocean, one which was warm and inviting, a beach which was soft and transitioned gradually into the ocean.  I think he meant to suggest that both of these oceans are connected.  They are in some sense, the same body of water.  Nevertheless, I think the two experiences are so different that it is difficult to speak in a meaningful way about them being the same.  We call both “ocean”, but in what sense are they similar?  You can get wet in both places, but even “wetness” is a very different experience in Oregon and Florida.  To me, it seems that the differences between the two experiences matter more than the similarities.  I care less about the chemical composition of water in general, and more about my friend’s experience of an ocean I have never known.

The same is true of experiences of the Divine.  The Tao Te Ching begins:

I’m not denying the existence of one monistic Divine, one eternal Tao, one great ocean connecting all of our religious experience … but is it possible to talk meaningfully about it apart from our own idiosyncratic experiences of the “ten thousand things”?  I don’t think so.

Religious scholar, Bryan Wilson, has identified seven types of religions: conversionist, revolutionist, introversionist, gnostic manipulationist, thaumaturgic, reformist, and utopian.  There are probably other types too, and there is undoubtedly overlap between the types.  Different kinds of Paganism would likely fall into different categories.  There’s not enough space to go into what all these categories mean here, but the point is that there are fundamental differences between religions.  These are not different paths up the same mountain.  They are different mountains.

I think a lot of interfaith work starts out with the admirable goal of finding similarities between religious communities.  (The Foundation for Religious Diplomacy is one exception.)  The hope is that this will reduce religious conflict and violence.  But I think that, in the process of seeking universality, we lose too many of the particulars.  Those particulars are important.  They can be as important, or even more important, than the universals.  As Stephen Prothero observes in his book, God is Not One, “These differences may not matter to mystics or philosophers of religion, but they matter to ordinary religious people.”

The result is that we end up watering down religion — usually other people’s religion — so it is palatable to us.  This does not really reduce religious conflict.  It actually perpetuates conflict by distracting us from learning about the real differences between religions.  I’m not suggesting that we stop looking for our similarities, those that are rooted in our common humanity.  But we shouldn’t try so hard to find them that we end up loosing sight of our differences, which are part of our humanity too.

In the process of searching for these commonalities, we tend to identify those elements that we like as “core” or “essential” and those we don’t like as mere “interpretations”.  (Swami Sivananda writes, “The fundamentals or essentials of all religions are the same.  There is difference only in the non-essentials.)  But one person’s “interpretation” is another person’s “core”.  And in the process digging for the “core” of all religions, we inevitably whittle away the experiences of certain classes of individuals — usually women, minorities, and the underprivileged — and even whole communities.  Looking at the dozens of religious leaders gathered in the Beyond Our Differences documentary, for example, I noticed that women were under-represented.  Liberal voices were over-represented.  Educated voices predominated.  What other voices were lost in the discussion, I wonder?

The way this happens can be very subtle.  Take this very simple example.  Sunday afternoon, I was talking to my wife about this very discussion in my UU Spirit Circle earlier that morning, and she said, “Don’t all religions share the same basic values?”  First of all, I think the answer to that question is “No.”  But even the question itself shows how profound differences can be lost in the process of seeking commonalities.  My wife phrased the question of religious commonality in terms of “values”.  It’s a natural question for her, and for many Mormons, who frame their religion primarily in terms of values.  But that’s not true for all religious people.  My own values, for example, flow from reason, compassion, and social contract, while religion for me is primarily about the “direct experience of that transcending mystery and wonder […] which moves us to a renewal of the spirit and an openness to the forces which create and uphold life.”  (First Source of Unitarian Universalism).  By framing the question in terms of values, my wife inadvertently privileged forms of religiosity which were similar to her own.

This can happen in an intrafaith context too.  It happens routinely in the Pagan community whenever we try to define what Paganism means.  Most attempts to define Paganism begin with mandatory lip service paid to Paganism’s diversity and then proceed to define the community by certain “core” ideas and practices which supposedly most of us hold in common.  The problem is that such lists always tend to privilege the Paganism of the author of the list.  While such attempts do commonly concede that there are forms of Paganism which are divergent, these lists unavoidably put certain ideas and practices at the conceptual center, pushing the divergent forms of Paganism to the periphery.  The result is that entire religious traditions are marginalized.  This has happened to devotional polytheists over the last decade or so.  Then we see individuals and groups withdraw from the Pagan community, because they no longer feel that Paganism is their home.  And when they leave, the Pagan community as a whole is diminished for the loss of their diversity.

(This is why I prefer to think of Paganism as having multiple centers, at least three — deity, earth, and Self — and possibly more.  This is a decentralized model is intended to reduce the risk that any one will be privileged over the others.)

One of the most visible forms of this totalizing of Pagan experience happens when we gather for pan-Pagan gatherings, especially Pagan Pride Day.  There, we feel compelled to present a unified face to the non-Pagan world.  As a result, we conduct purportedly “generic” Pagan rituals, which are really inspired predominately by one Pagan tradition, and then watered down to be palatable to many, but savory to none.  Stephen Prothero observes that “religion does not exist in the abstract.  You cannot practice religion in general, any more than you can speak language in general.”  So-called “generic” Pagan rituals are proof of this.  As many people will attest, these rituals are the worst that Paganism has to offer.  So why do we do them when we should be showcasing our best?

I wonder, wouldn’t it be better, rather than trying to represent everyone at once, instead to take turns presenting rituals that are specific to smaller Pagan groupings?  Instead of having a Wiccanate ritual open and close Pantheacon every year, for example, the organizers chould invite different traditions each year to plan something different.  Instead of performing the same Wiccanesque circle casting and calling of the quarters at the next CUUPs ritual, leaders could invite people to share a ritual that really matters to them.  Yes, ask them to explain their tradition and the ritual to those who are unfamiliar with them.  Invite them to tailor it for the larger community to the extent they are comfortable, but don’t pressure them to dumb it down or make it more accessible to everyone if doing so will compromise the integrity of the ritual.  If we truly value diversity as much as we claim, shouldn’t we be encouraging deviation from the standard Wiccanate ritual format?

This is just one suggestion, but it is part of a broader vision of building community around difference, instead of around commonality.  I admit, I have been guilty focusing too much on the supposed similarities among Pagans myself.  You can see on this very blog how I have frequently tried to define Paganism in my own image.  But I’m starting to ask different questions now … Is it possible to build a religious community around the idea of celebrating difference?  Is it possible that what makes us “Pagan” is not what we have in common, but the ways we are different?  Perhaps being “Pagan” means nothing more (and nothing less) than being one those who have gathered around this word, “Pagan”, gathered together to celebrate not a single meaning, but to celebrate the diversity of what that word means to us.

During the service at my Unitarian church Sunday, we sang “Where is our holy church?” (Singing the Living Tradition, Hymn 113).  I was struck by one line, goes:

“Where is our holy One? A mighty host respond …”

Most interfaith and intrafaith discussions about community might be described as a search for the “holy One”.  But in response to our call for Oneness, the world answers with a “mighty host”; it answers with the “ten thousand things”.  I think the wider Pagan community might take a page from the polytheists and consider seeking unity in diversity, or better yet, unity through diversity.  This is like what Jason Pitzl-Waters described as “solidarity, not unity”, but even more than that.  It is a kind of unity, not in spite of our differences, but because of our differences.  It is about seeing diversity, not as an obstacle, but as a strength, as a resource.  It is about seeing our difference paradoxically as the real defining characteristic of Pagan community.  This radically different kind of community is, I think, one of the promises of Paganism. 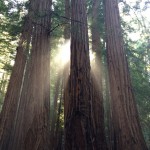 March 8, 2014
A Devotional Practice with the World at its Center
Next Post