Earlier this week, while visiting my in-laws in Utah, we drove up to Fish Lake, which is near where my wife’s parents live.  Fish Lake is home to what may be the largest living organism on the planet … Pando.

I first learned about Pando while browsing a book of photography of the Oldest Living Things in the World.  I was surprised to learn that living within driving distance of my in-laws is one of the oldest and possibility the largest living thing on the planet.  Pando isn’t a blue whale or a giant sequoia.  It’s a grove of quaking aspens.  It’s been determined by genetic markers to be a single living organism with a giant root system stretching over 100 acres and containing over 40,000 individual trunks.  It is estimated that the root system is  80,000 years old, although it may be much older.  So I insisted that on our next trip to Utah we had visit Pando.

So this past Tuesday, I drove my wife and kids to see Pando along with my Mormon mother- and father-in-law, sister-in-law, and niece and nephew.  We stopped at the main grove, which was partially fenced off due to an ongoing reclamation project.  I went into the woods and my nephew followed me.  I poured a libation to the organism.  We then returned to my family and we found a picnic area in a smaller grove of the aspens, probably a part of Pando too.

After lunch, my Mormon wife conducted a little interfaith ceremony for the family.  She read this verse from Genesis:

And Abraham planted a grove in Beersheba, and called there on the name of the LORD, the everlasting God. (Gen. 21:33)

And my wife explained that “grove” was a euphemism for and symbol of the goddess Asherah, who was the wife of Yahweh (“Lord”).  She then went on to explain how our family, Mormon and Pagan alike, can honor both the divine feminine and “creation” in the form of trees generally and specifically the grove in which were were sitting.  She then invited everyone to pour a libation of water and think on how we are grateful for nature and our lives.  My mother-in-law, who is a lifetime Mormon, drew the connection between the interconnectedness of the roots of Pando and how we human beings are all connected as a family … and I think it is just a short step from there to the interconnectedness of all living things.

It was a beautiful ceremony and it was very special sharing it with my extended family.  My 14-year old nephew especially showed an interest in the Pando organism and in the libation ceremony.  I am confident that no one walked away from that experience without a deeper appreciation of our connection to the earth and a fresh appreciation of what Paganism is all about.

We then went to the ranger station, where the nagging question I had was answered.  I already knew that Pando was under threat, but I wanted to know how an 80,000 year old organism suddenly becomes at risk, coincidentally in my lifetime.  The park ranger explained that Pando is under threat from blight and new invasive inspects.  According to the ranger, global warming has changed the climate of the area, inviting new pathogens and insects that had not previously threatened the trees.  Pando partially fenced off because the forest service is trying different techniques to mitigate these effects.  My extended family listened to this matter-of-factly, which in itself was remarkable, since they would likely have been among the global warming naysayers not too long ago.

1.  Whether or not there is time to prevent global catastrophe, I chose to act as if there is.

2.  If were are to going to really change things, we need to change our relationship with the Earth in a fundamental way.

3.  By viewing environmentalism as a religious issue and religion as an environmental issue, Paganism has the potential to help effect this fundamental change.

4.  If Paganism is going to help effect this change, we need to start sharing our faith.

Honestly, I’ve never understood the Pagan aversion to proselytizing.  I don’t mean knocking on doors like Mormons with a Book of Shadows in hand.  I mean sharing our faith with our friends, our family, even our neighbors.  And I don’t mean trying to convert people.  I do mean sharing with people the perspective that Paganism gives us.  I mean helping to normalize the idea that we are an interconnected part of this earth.  I mean helping to gradually shift people’s consciousness out of a dominator paradigm to a partnership paradigm.  I mean finding common ground with Christians and other faiths so that we can work together.

And I mean inviting people to participate in simple rituals that will help them form a living bond with the earth.  As John Beckett has recently written:

“It isn’t education or information.  It’s a personal, heart-felt connection to what is desired.  It’s learning to see the Earth as sacred, to feel the Earth is sacred.”

And we Pagans can help people feel that.  But first we have to let go of this idea that people will magically find their way to Paganism if it’s right for them.  We need to get over our timidness and our excuses.  We need to let go of the idea that sharing our faith is the same thing as pushing it on people.

Pagans, we have something the world desperately needs and, if there is such a thing as sin, then it is a sin for us to hide our faith in the closet. 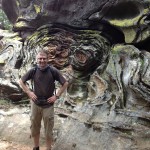