The Maidens of the Wells: An ecofeminist myth

Having just talked about ecofeminism, I think now might be a good time to pause and and tell a story. 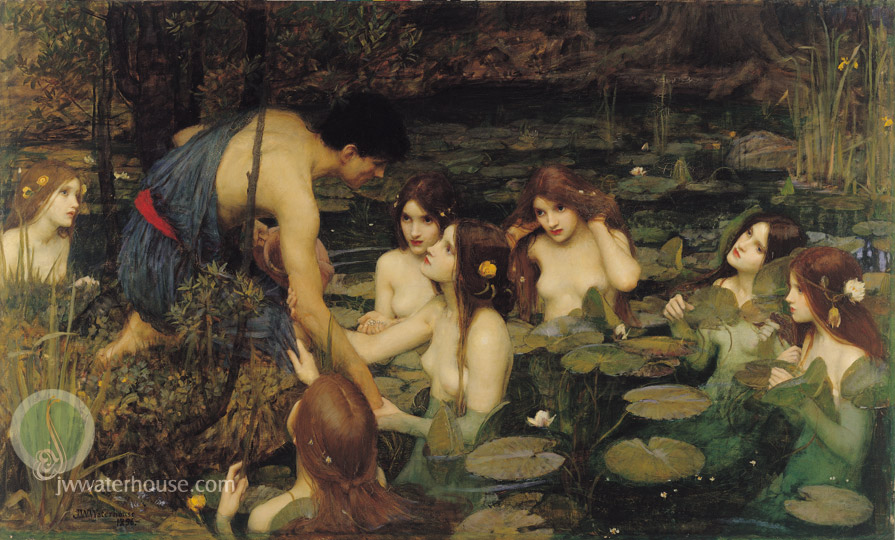 The Wasteland in the Grail Myth

This story comes from the Arthurian Grail mythos.  You’ve probably heard of the search for the Holy Grail undertaken by King Arthur’s knights.  One of the scenes which recurs in several versions of that story is the chapter about the Fisher King and the Grail Castle.  If you are familiar with the Arthurian Grail mythos, you might agree with me that one of the most perplexing parts of the story is the origin of the Wasteland.  In the various versions, one of the knights comes upon the Grail Castle and meets the “Fisher King” or “Rich Fisher” (probably an allusion to Jesus).  In the course of his stay, the King is wounded, usually stabbed somehow by a spear in the thigh or genitals.  This wounding mysteriously causes the country around the Grail Castle to become barren.  Thereafter, it is called the “Wasteland”.  And it becomes the quest of the knight to restore the king and the land to health.

This myth relates to the idea, described by James Frazer and others, that a special “sympathetic” relationship exists between a ruler and the land.  In some cases, he is symbolically wedded to the land, which is symbolized by a Goddess of sovereignty.  The relationship is such that, if somehow the king becomes physically impaired or morally unworthy, then the land would then cease to be fertile.

The various Grail texts are, however, confused and contradictory with regard to the cause of the original wounding of the Fisher King and the creation of the Wasteland.  But one obscure text, called the “Elucidation” explains the creation of the Wasteland in a novel way, which also has relevance for our lives today.  The anonymous text known as the “Elucidation” is a brief prologue to Chrétien de Troyes’s Perceval. It was composed after Chrétien’s work, sometime during the early thirteenth century.  The “Elucidation” recounts the story of the “Maidens of the Wells” and attributes the creation of the Wasteland of the Grail myths to their violation by a King Amangon.  These well maidens are representatives of the Goddess of sovereignty, representatives of the fertility of the land.

This is the story: 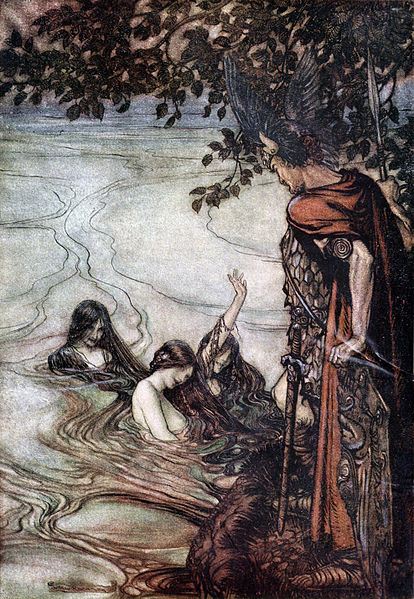 The Maidens of the Wells

The kingdom went to ruin,
The land was so dead and desolate
That it wasn’t worth two bits;
They lost the voices of the wells
And the maidens who dwelled in them.
Indeed, the maidens served a very important purpose:
No one who wandered the highways,
Whether at night or in the morning,
Ever needed to alter his route
In order to find food or drink;
He had only go to one of the wells.
He could ask for nothing
In the way of fine and pleasing food
That he would not have forthwith,
Provided he asked reasonably.
At once a damsel would come forth
From the well, as I understand:
Travelers could not have asked for one more beautiful!
In her hand she’d be bearing a golden cup
With bacon, meat pies, and bread.
Another maiden would come carrying
A white towel and a gold and silver
Platter, in which was
The food that had been requested
By the man who’d come to be fed.
He was warmly received at the well;
And if this food did not please him,
She would bring a number of others,
Joyfully and generously,
According to his desires.
One and all, the maidens
Happily and properly served
All those who wandered the highways
And came to the wells for food.

King Amangon was the first to violate their hospitality:
He behaved wickedly and underhandedly;
Afterwards many others did likewise
Because of the example given
By the king who should have protected the maidens
And guarded and kept them safe.
He forced himself upon one of the maidens
And deflowered her against her will
And took the golden bowl from her
And carried it off along with the girl,
Then had her serve him ever afterwards.
Ill luck was to come of it,
For no maiden served again
Or came forth from that well
To help any man who happened by
And requested sustenance there;
And all other [travelers] followed [the king’s example].
God! Why didn’t the other vassals
Act according to their honor?
When they saw that their lord
Was raping the maidens
Because of their beauty,
They likewise raped them
and carried off the golden bowls.
Never afterwards did any maiden serve
Or come forth from any of the wells;
Know that this is the truth.
My lords, in this way
The land went into decline
And the king who had so wronged them
And those who’d followed his example
All met a dreadful end.
The land was so wasted
That no tree ever bloomed there again,
The grasses and flowers withered,
And the streams dried up.
Afterwards no one could locate
The court of the Rich Fisher,
Which had made the land resplendent
With gold and silver, splendid furs,
Precious brocaded silks,
Fine foodstuffs and cloth,
Gerfalcons and merlins,
Goshawks, sparrowhawks, and falcons.
In earlier days, when the court could be found,
There was throughout the land
Such an abundance of riches,
Of all those I’ve named here,
That everyone, rich or poor,
Was awestruck at the wealth.
But now it has lost everything.

(You can read the full text of the “Elucidation” here.)

In “The Rape of the Well-Maidens: Feminist Psychology and the Environmental Crisis” (published in Theodore Roszak’s Ecopsychology: Restoring the Earth, Healing the Mind (1995)), Mary Gomes and Allen Kanner draw the connection between the “Elucidation” and our present environmental crisis.

“This story illustrates a key insight of ecofeminism: that the despoiling of the Earth and the subjugation of women are intimately connected. It is not a coincidence that when women are raped, the land becomes parched and desolate, and when ‘feminine’ qualities are oppressed, the human mind is cut off from participation in the mystery and left with a disenchanted world. In patriarchal cultures, it is common to find patterns of domination and control aimed at both women and the land.”

The maidens represent the life-sustaining quality of the earth giving each person we need “provided he ask reasonably”, as the text says.  But we have not “asked reasonably”.  We have violated the earth, just as King Amangon and his knights violated the maidens of the wells.  Rape may be understood as a denial of the personhood of the victim.  Similarly, we deny the personhood of the other-than-human beings that are a part of our biotic community.  And just as the land of Logres became dead and desolate, the trees ceased to bloom, the grasses and flowers withered, and the streams dried up, so too we are witnessing the desolation of our environment.  The “Elucidation” at least suggests that the wounding of the land was the cause of the wounding of the Fisher King (and the disappearance of his castle), not the other way around.  Similarly, in wounding the earth, we have wounded ourselves.

But the story does not end there.  Later, Arthur’s knights come across a band of maidens and knights in the forest.  Initially the fight, but eventually Arthur’s knights learn that the maidens  are the daughters of maidens of the wells (and perhaps the knights are their sons), “offspring of both nature’s guardians and its destroyers”, as Gomes and Kanner write.  They wandered the land, seeking the castle of the Fisher King, which had vanished when the maidens were violated.  We are all those maidens and those knights, children of a violated earth, bearers of “the dual inheritance of the destructive aspects of our culture and the living soul that continues beneath it.”  But instead of searching for a lost paradise (like the maidens and the knights searching for the court of the Fisher King), we must find a way to restore the wells.  We must restore their divine guardians. We do this by restoring the sense of the sacred to the natural world which has been desecrated.  This is a new myth which we have to write together: The Restoration of the Maidens of the Wells.

October 1, 2014
Branches of the Deep Ecology Tree: Ecofeminism: Reuniting the masculine and nature
Next Post

October 5, 2014 Branches of the Deep Ecology Tree: Ecotheology: Reuniting God and nature
Recent Comments
0 | Leave a Comment
"Ironically, the pagans have stumbled upon evidence that there will be an Armageddon exactly when ..."
The Penitent Man Shall Pass Call for a Pagan Community Statement ..."
"John H.Halstead...Someone wrote or said. Be the change you want to see in the world. ..."
Toni Stamps 13 Things You Don’t Need to ..."
""petty and defensive"?: "Are you foolish enough to think christianity is the elder?""
John H Halstead 13 Things You Don’t Need to ..."
"Attack? This isn't my faith :)Is it yours? You come accross more christian....petty and defensive."
Toni Stamps 13 Things You Don’t Need to ..."
Browse Our Archives
get the latest from
Pagan
Sign up for our newsletter
POPULAR AT PATHEOS Pagan
1

How to Do Paganism Wrong –...
John Beckett
Related posts from The Allergic Pagan