An Interfaith Ritual with the World’s Largest Living Being: My Winding Path to Environmental Activism (Part 6/10)

An Interfaith Ritual with the World’s Largest Living Being: My Winding Path to Environmental Activism (Part 6/10) May 18, 2016 John Halstead

Later that summer, while visiting my in-laws in Utah, we drove up to Fish Lake, which is near where my wife’s parents live. We went in search of the largest living organism on the planet — Pando.

I first learned about Pando while browsing a book of photography titled The Oldest Living Things in the World. I was surprised to learn that living within driving distance of my in-laws was possibly the largest (and one of the oldest) living organisms on the planet. Pando isn’t a blue whale or a giant sequoia. It’s a grove of quaking aspens. It’s been determined by genetic markers to be a single living organism with a giant root system stretching over 100 acres and containing over 40,000 individual trunks. It is estimated that the root system is at least 80,000 years old.

So I drove my wife and kids and my Mormon in-laws into the mountains to see Pando. We stopped at the main grove, which was partially fenced off due to an ongoing reclamation project, and then we found a picnic area. After lunch, my Mormon wife conducted a short interfaith ceremony with the family. She read a verse from Genesis about Abraham planting a grove and calling on his god there. My wife explained that, in the Hebrew Bible, “grove” was a euphemism for and symbol of the goddess Asherah, who was the wife of Abraham’s god and perhaps a euphemism for the Mormon “Heavenly Mother”. She then went on to explain how our family, Mormon and Pagan alike, can honor the divine feminine and “creation” in the form of trees generally and specifically in the form of the grove in which we were sitting.

My wife then invited everyone to pour a libation of water and contemplate our gratitude for nature and for our lives. My mother-in-law, who is a multi-generational Mormon, drew the connection between the interconnectedness of the roots of Pando and how we human beings are all connected as a family. I think it is just a short step from there to the interconnectedness of all living things. It was a beautiful ceremony, and it was very special sharing it with my extended family. I am confident that everyone came away from that experience with a deeper appreciation of our connection to the Earth and a fresh appreciation of what Paganism is all about.

We then went to the ranger station, where I had a nagging question answered. I had read that Pando was under threat, and I wanted to know how an 80,000 year old organism suddenly becomes at risk in my lifetime. The park ranger explained that global warming has changed the climate of the area, inviting new pathogens and insects that had not previously threatened the trees. Pando was partially fenced off because the forest service is trying different techniques to mitigate these effects. My extended family listened to this matter-of-factly, which in itself was remarkable, since some of them might have been among the climate change deniers not too long ago. 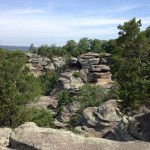 May 17, 2016
The Garden of the Gods in My Backyard: My Winding Path to Environmental Activism (5/10)
Next Post

May 19, 2016 It Should Have Happened on a Mountaintop: My Winding Path to Environmental Activism (Part 7/10)
Recent Comments
0 | Leave a Comment
"Ironically, the pagans have stumbled upon evidence that there will be an Armageddon exactly when ..."
The Penitent Man Shall Pass Call for a Pagan Community Statement ..."
"John H.Halstead...Someone wrote or said. Be the change you want to see in the world. ..."
Toni Stamps 13 Things You Don’t Need to ..."
""petty and defensive"?: "Are you foolish enough to think christianity is the elder?""
John H Halstead 13 Things You Don’t Need to ..."
"Attack? This isn't my faith :)Is it yours? You come accross more christian....petty and defensive."
Toni Stamps 13 Things You Don’t Need to ..."
Browse Our Archives
get the latest from
Pagan
Sign up for our newsletter
POPULAR AT PATHEOS Pagan
1

A Collection of 12 Sigils for...
A Modern Traditional Witch
Related posts from The Allergic Pagan