I don’t often agree with polytheists, but when I do …

I don’t often agree with polytheists, but when I do … June 8, 2016 John Halstead 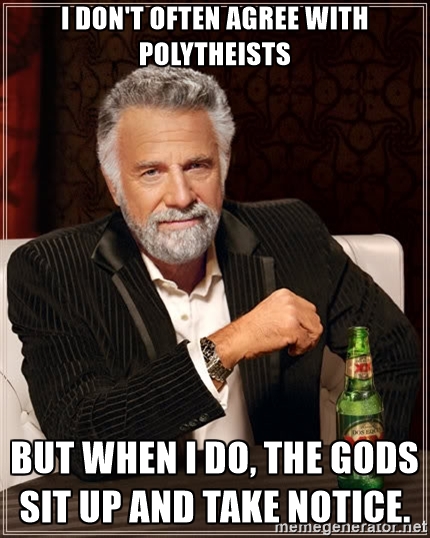 I don’t often agree with polytheists about religious matters, so I am excited when I come across a polytheist idea or practice that resonates with me.  I recently came across two articles by polytheists who I usually find on the opposite end of the spectrum of any discussion I am in, but in this instance I found myself nodding my head vigorously.

The first article comes from Galina Krasskova (pause for effect), in which she describes a “Public Shrine Project“, which was originally conceived by Krei S.  The idea is for Pagans, Heathens, and Polytheists to build temporary shrines, ideally with found objects, in public places.  Krasskova describes it as a kind of “land art,” which combines devotion and art, and “reseeds” the mundane world.

Here are the guidelines Krasskova lays out:

What’s cool is that this is a practice that can work for anyone, regardless of their theological orientation.  The idea of creating temporary shrines from natural materials is one that I have written about before, as have Anna Walther and Mark Green.  I know, amazing!  I cannot imagine two people more theologically opposed than Mark Green and Galina Krasskova, and yet they share a similar practice.  It makes you wonder what might happen if we Pagans — both polytheist and atheist — focused more on praxis than belief.

Glen Gordon and I had the idea of erecting these “eco-shrines” in secluded places and plotting their locations with GPS coordinates, kind of like geocaching, so other people interested people could find them. But I also see value in placing the shrines in conspicuous locations, kind of like the roadside memorials on highways where someone died.  I see eco-shrines as a way to reclaim our public green spaces from the desacralizing influence of modern urban and suburban planning, a kind of guerrilla art that can be employed to re-enchant our public green spaces.  I think this is what Krasskova was getting at when she wrote about “reseeding the mundane world.”  It’s similar to something she calls “God-bombing”, a kind of sacred grafitti.  Public parks or any other green space, even a highway median, can be “reclaimed” in this way.

At first, at least, we would have to expect that these shrines would be removed by landscaping or maintenance staff or desecrated by ne’er-do-wells or iconoclasts.  But one of the advantages of the eco-shrine is that it is relatively easy to rebuild.  Some people are bound to be creeped out by public shrines.  But I imagine that, if we kept returning to the same spot, rebuilding our natural shrines, that one day we would find that someone else had followed suit and built an eco-shrine before us.  And after years, the place might indeed become a holy place in the mind of the non-Pagan public as well.

I encourage everyone to try this out and send Krasskova pictures with descriptions.

The second article that caught my attention was entitled “Super-Local Polytheism” by Dver.  I’ve been a long-time advocate of localizing our Pagan practices, myself.  Although she approaches this issue from a polytheist perspective, Dver arrives at a very similar place (pun intended).  She gives as examples of what she calls “super-local polytheism”:

“getting to know the nearby landwights, researching historical figures and events that might warrant spiritual recognition (such as hero cultus, commemorative festivals, etc.), melding religious observances with community celebrations, identifying local aspects of European gods (e.g., several American devotees have met a Buffalo Dionysos), even simply caring for the holy or numinous places in one’s region (cleaning up the riverbank, planting trees, etc.)”

At least some of these are things that non-theistic Pagans can do too!  In addition, Dver describes getting a map of where she lives and drawing concentric circles at different distances from her home. Using the map, she tries to focus her devotions to the areas close to where she actually lives:

“Instead of making longer treks out to the wetlands or the buttes (at least two miles away) whenever I want to connect with local nature spirits, I have been spending more time in the ash wood just down the street from me. Within a very small area, there is a wide variety of wildlife, natural features, and surprisingly vibrant spirits (considering it is bound on all sides by human activity). Each time I visit, and leave offerings, and perform small bits of magic, I bind myself more to that place, and further open the veil between the worlds there, making an already numinous spot even more powerful.

“Instead of walking all the way downtown or beyond to seek out the wonderful urban treasures of this city in honor of Hermes, I have been exploring my neighborhood, the parts I never went to, off the beaten path. There is so much history here, and so much of it appropriate to Hermes in some way – the unearthed trolley tracks, the marker for our city’s first college – as well as tons of little hidden gems, like the backyard facing an alley where someone accumulated several antique phone booths all together, or the Little Free Libraries scattered along the streets. And each time, again, that I leave offerings for the god in one of these places, I strengthen that spot as holy.”

I have found local maps to be great aids to my own practice too, as they enabled me to discover green spaces in my suburban surroundings that I had not known existed.  As a result of this practice, Dver writes that she now has a better sense of her immediate spiritual landscape.  As she sits at home, she feels the web of connections spreading out in all directions, and when she walks somewhere, she notes the spiritual significance of all the places she passes and thinks about the rituals she have done there.  This practice reminded me of the idea of a Faerie Ring Henge, which is described in Jo Carson’s book, Celebrate Wildness: a home shrine that is connected to eight more distant locations, radiating outward like spokes on a wheel. The connection is make by by actually walking to each place and bringing back a token or leaving one there.

A quick perusal of her blog revealed that this local focus has long been a concern for Dver.  Here, she writes “Real, workable, relevant local cultus evolves organically (and yes, even slowly!) over time in response to one’s environment.”  And here, she writes:

“Over the years, I have become convinced that a deep engagement with the lands in which one lives is essential for those following a Reconstructionist path. Moving from an intellectual understanding of the gods and the source religion to an active relationship with the spiritual world in the here and now requires that one be fully present where one is….

“One should become fully intimate with one’s local area, learning as much as possible about the ecosystems involved, paying close attention to the changes in the landscape as the seasons progress. This can be done even in an urban environment, which is never totally bereft of animal or plant life, and just as subject to the elements as anywhere. But it’s not enough to just study and observe. In my experience, the real magic happens when you begin to perform repeated ritual acts within that landscape, specifically acts that are inexorably tied to place.”

Wow!  I couldn’t have said it better.  I find these intersections with my own non-theistic practice to be encouraging.  While I may never agree with Krasskova and Dver on theological issues, I am heartened at the thought that one day we, and others like us, might nevertheless be able to occupy the same sacred space and together honor the divine that we find there. 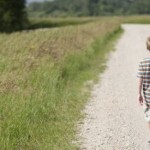 June 5, 2016
Home is a Place You Have Never Been: Finding Eternity in Change
Next Post

June 13, 2016 An Earthseed Solstice: Festival of the Teacher
Recent Comments
0 | Leave a Comment
"Ironically, the pagans have stumbled upon evidence that there will be an Armageddon exactly when ..."
The Penitent Man Shall Pass Call for a Pagan Community Statement ..."
"John H.Halstead...Someone wrote or said. Be the change you want to see in the world. ..."
Toni Stamps 13 Things You Don’t Need to ..."
""petty and defensive"?: "Are you foolish enough to think christianity is the elder?""
John H Halstead 13 Things You Don’t Need to ..."
"Attack? This isn't my faith :)Is it yours? You come accross more christian....petty and defensive."
Toni Stamps 13 Things You Don’t Need to ..."
Browse Our Archives
get the latest from
Pagan
Sign up for our newsletter
POPULAR AT PATHEOS Pagan
1

Is it Lughnasadh without Lugh?
John Beckett
Related posts from The Allergic Pagan