On Eve of the Olympics, China Rolls out new Tibet Propaganda 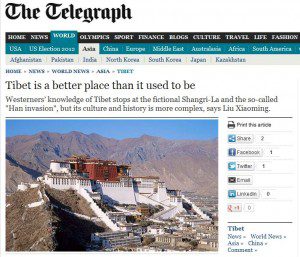 Yesterday, England’s newspaper The Telegraph (nicknamed the “Tory-graph” after the country’s conservative political party to which it caters) ran a piece of pure Chinese propaganda.

The piece (one could hardly call it an article) is by Liu Xiaoming, the Chinese ambassador to Britain, and was featured just a day before the Olympic Games Opening Ceremony (tonight). Amazingly, Liu claims that:

Today, Tibetan people are masters of the Tibet Autonomous Region. They no longer have to worry about livelihood. They all have equal access to education of Tibetan language and culture. Much effort is going into further developing Tibetan culture and art.

Unfortunately, this couldn’t be much further from the truth. Monasteries are occupied by government troops, monks and laypeople disappear in government raids, others are shot and killed or simply starve or freeze to death on their attempts to leave Tibet. Nepal, once a safe haven en route to settlements in India, has become increasingly pro-China, arresting and returning (to who knows what fate) many of those who try to escape the horrible situation in China-occupied Tibet.

Of course, Liu’s claims are nothing new. In fact their is practically a factory for Chinese propaganda on Tibet, the Cultural Palace of Nationalities, which the NY Times describes as:

a socialist-style confection whose current exhibition, “50th Anniversary of Democratic Reforms in Tibet,” is getting rave reviews from the soldiers, schoolchildren and government officials who are bused in day after day.

With its display cases of gruesome torture devices, grainy film scenes of mutilated faces and the “liberation” shots of beaming Tibetans, the exhibit is a propagandist tour de force that reinforces the Communist Party’s unbending version of history during what is referred to here as a “sensitive time.”

In a sense it’s just sad. I avoid bringing up the topic of Tibet and the Dalai Lama around most of my Chinese friends. Most have been educated 1) to distrust Western media and views and 2) to especially distrust Western media and views on Tibet. So naturally any non-Chinese version of history, ancient or modern, is discounted. One friend, who has been in the UK for about a decade now, actually surprised me a few weeks ago, blurting out, “it’s all bullshit, everything that the Chinese government says is lies…”

But what is sadder, perhaps, is that Western media is now so desperate for …(?) that they are regurgitating Chinese propaganda word for word.

Here are some glimpses into recent atrocities in Tibet under Chines control as well as a petition to the UN to bring attention to the issue.

The FLAME OF TRUTH RELAY is a global event, beginning on July 6, 2012, the 77th birthday of HH the Dalai Lama, in northern India, will travel from there across hundreds of cities around the world. The relay will end on December 10, 2012, World Wide Human Rights Day. (see more and sign here)

And here are some other sites for information. Educate yourself, educate your friends and family.