Announcing the Death of the International 969 Movement

Announcing the Death of the International 969 Movement December 13, 2013 Justin Whitaker

Although it may simply be dormant at the moment, it seems that the international 969 Movement (as opposed to the Burmese 969 Movement which inspired it) is no more.

In a post written in August, I discussed my interactions with the international 969 Movement:

Last month I was contacted, first on this blog and then on twitter, by someone using the name “969 Movement.” Intrigued, I contacted the individual behind the social media postings. I told the individual that I have studied Burmese history and traveled there recently and would love to conduct an interview if possible. In his response (dated July 13) he noted the following:

I politely declined and wished him well.

Should I have delved deeper? Chastised him for his ignorance? Perhaps. But I was content to see that the whole thing was just one guy, and not part of some international media campaign by the actual 969 Movement in Burma. Alicia Wittmeyer from the Foreign Policy blog also contacted him and writes, “He’s a self-proclaimed “white American national” who has no family connections to Myanmar and has never visited the country. He’s not an expert on its politics either, he tells me — which becomes clear later in our conversation when he draws a blank on the name of Aung San Suu Kyi…” Read the full story here: Meet the American Supporting Myanmar’s Controversial Pro-Buddhist Movement.

Over time we found out that the “movement” was orchestrated by one individual based in California calling himself Andrew Sila. At one point this fall he announced on twitter that he would soon be announcing  a second member of the board of directs along with global contacts but no such names or lists ever appeared. 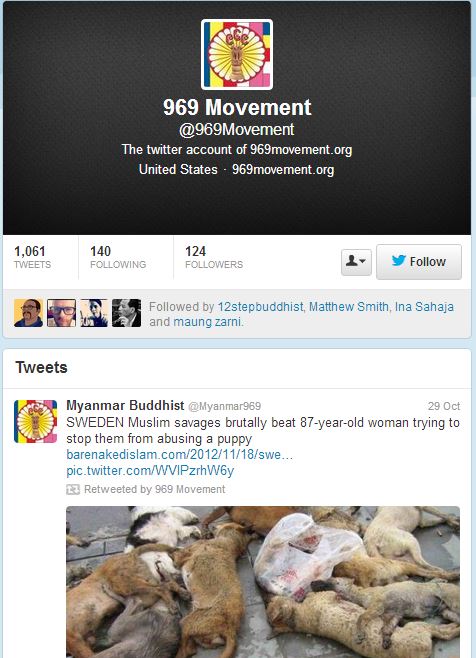 For more background, see the discussion around an August interview with Michael Jerryson, Rupert Gethin,  and Soe Win Than (as well as, briefly, Maung Zarni) on the BBC. The above 969 twitter account only ever gained around 125 followers despite prolific networking, and many of those followers were academics and journalists who, like me, simply wanted to keep tabs on the “movement.” However, in the comments on the BBC post, Michael Jerryson pointed me to the Buddhist Defense League facebook group, which at the time had over 15,000 members. Today it has over 34,000.

As Jerryson wrote,  “The BDL presence and following suggests an English-supported push to stylize Buddhist movements in a “English Defence League” manner.”

I’m inclined to agree, although I am a bit cautious, as the BDL has no ‘on-the-ground’ presence similar to that of the EDL.*

Yet the links to the EDL are not unfounded. The BDL’s facebook page describes itself as “Fight against Jihad on Buddhist” and comments supporting the EDL can be found within its pages. U Wirathu, the head of 969 in Burma, has also expressed his admiration and emulation of the English Defense League. There is also a specific Myanmar Defense League, itself with over 16,000 likes.

All of this points to a potential disconnect that many Western Buddhists have with Buddhism (or at least Buddhists) in SE Asia, where racism, nationalism, and Islamophobia may lurk quite near the surface, just behind the smiles and calm introspection we so often associate with people there. Aung San Suu Kyi, long heralded as an ideal Buddhist/politician/human rights campaigner, was herself brought under fire this fall by Maung Zarni and others for denying that Buddhist-led crimes against humanity were taking place in Burma. Here is the Oct 24 BBC interview, where she told the BBC’s Mishal Husain, “I think the problem is due to the fear felt by both sides.”

The complexity of the fear felt by Buddhists in SE Asia, fueled by groups such as 969 (which faced a ban in Burma in September) and the BDL, is something that needs to be acknowledged and discussed. It’s a promising sign that the international 969 Movement never really got off the ground and now appears to be defunct, but the rapid growth of the BDL and M(ayanmar)DL show that significant progress in Buddhist-Muslim relations is still needed.

*In Sri Lanka there is a sort of physical, on-the-ground BDL organization, the Bodhu Bala Sena (Buddhist Power Army).

December 15, 2013 A Father who lost his son at Sandy Hook asks Thich Nhat Hanh what could have prevented it
Recent Comments
0 | Leave a Comment
Browse Our Archives
get the latest from
American Buddhist Perspectives
Sign up for our newsletter
POPULAR AT PATHEOS Buddhist
1