Editor’s note: This is the second of two posts this week on race in American Buddhist communities. It occurred to me that both of our wonderful authors, Ann and Craig are both white, as am I, and as are most of my readers – at least the ones I’ve gotten to know over the years. So while I am very happy to see this conversation happening and growing, I want to see the discussion opening up across racial lines as Craig suggests here. I know Ann invited one African American colleague who could not contribute at this time and I just recently sent out invitations to a half-dozen or so people I know or know of who I’d love to see contributing to this conversation. But I also invite you, dear reader, to contribute in the comments, sharing experiences, worries, hopes, years of academic research, whatever you’ve got. If you have a longer piece in mind, email me at Buddhistethics AT gmail DOT com and we can talk more. Somewhat tangential but related is the fact that I changed the name of this blog last year, ever so slightly, by adding the “s” at the end. I don’t want this site to simply be a reflection of one limited perspective (my own), but instead to be a reflection of the incredibly wide and diverse world of American Buddhism which, like Indra’s Net, reflects infinitely out through generations of Asian Buddhists, Western philosophers, mothers, children, stories known and unknown…

The first time I heard about a person of color (POC) retreat, I was living in a Zen monastery in the Colorado Rockies, reading Tricycle magazine in a rare, and therefore savored, moment of free time. I saw an ad for a POC retreat at IMS. My first thought, as a white male who had been practicing for over a decade, was, Why do we need that? The Dharma, I reasoned, was for everyone. Anyone was welcome at the 7-day sesshins our center hosted; anyone with the requisite experience could join our annual 3-month retreat. Feeling uncomfortable, I put the thought from my mind.

That was almost a decade ago. Looking back, I now see those thoughts for what they were: expressions of blindness, of privilege, a version of the ahistorical ignorance that has been the cause of so much suffering in our nation – and in our Buddhist communities.

Because, in fact, people of color didn’t come to our monastery. We drew students from all over the country, from San Francisco, Santa Fe, Boulder, Denver, New York, Boston. Students came to us, too, from Austria, Germany, and France. But all – or nearly all – of the students who came to us came white. They were white by skin color, and they were white by culture. In fact, I would now say that, in addition to teaching Zen, our monastery inadvertently taught whiteness.

These days, I am writing my dissertation on racial dynamics in Buddhist communities. I interview people of color about their experiences in primarily white meditation communities. I ask the most basic questions. What’s it like to be a person of color in this really white community? Can you tell me about an experience when you felt truly included – all of you? How about a moment when you felt you had to leave a part of you out to be a part of things? What would it take for this community to be a truly welcoming place, a place built for you?

In an 80-page proposal to pose these questions, I drew on the history of segregation in American churches and the history of American Buddhism; I referenced Critical Race Theory, the literature on microaggressions, and Elijah Anderson’s thoughts on the White Space; I wrote about intergroup relations and styles of acculturation.

But nothing prepared me for what I found when I actually talked with people of color – in person, in interviews that lasted between 45 and 90 minutes.

I am aware of “non-essentializing,” the seemingly obvious idea that not all black people (or Asian Americans, or white folks) think alike. It’s a core principle in race theories. And I know that often members of a single community bring multiplicity to every meeting. But even these handy constructs fell short of the dynamic, fluid, and radically individual narratives that my participants have offered.

When I asked participants to imagine a space that was truly theirs, really welcoming, some thought that space would have more laughter, more singing, more food. There would be children playing. People would talk to each other more, and louder; they would know each other better. The word intimacy came up more than once. Others said, simply, that there would be more “color in the crowd.”

I can’t say I’ve answered my research questions yet. I still need to do more interviews. I have barely started my analysis. But I can say one thing for sure:

It matters. We should be talking about this. And we should be talking about it across racial lines. Because, as Ann Gleig so eloquently pointed out in the companion piece to this article, racism is a form of dukkha; it’s suffering. It’s a suffering that is playing out all over America, and at the heart of our communities. If we, as Buddhists, are serious about addressing dukkha, then we need to get serious about addressing race. 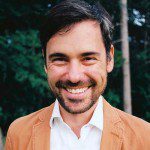 Craig Hase is a PhD student in the counseling psychology department at the University of Wisconsin-Madison. In addition to his research on race in meditation communities, he teaches meditation to helping professionals.

* For now, two recent helpful articles on this blog are an interview with La Sarmiento and the review of “The Way of Tenderness.” 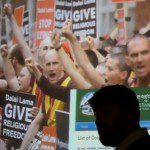 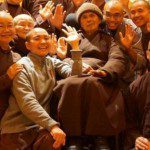 January 8, 2016 Buddhist Teacher Thich Nhat Hanh returns to Plum Village after US treatment
Recent Comments
0 | Leave a Comment
Browse Our Archives
get the latest from
American Buddhist Perspectives
Sign up for our newsletter
POPULAR AT PATHEOS Buddhist
1