My “Affair” with a Youth Pastor

My “Affair” with a Youth Pastor April 22, 2015 Guest Contributor

“It took me years to realize that my relationship with my pastor was not romantic — it was sexual abuse.” 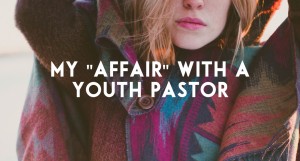 I was fifteen years old, lying next to my youth pastor during an overnight leadership team retreat. He was the only adult chaperone, and the rest of my peers slept soundly around me. We were talking in hushed tones about my body image issues, and he asked what part of my body I was most self-conscious about.

I told him: my stomach.

He told me he was going to touch my stomach so I would realize how beautiful it was.

The next day he took me back to his apartment — I don’t know where his wife was that day — and kissed me for the first time. I remember it vividly — what I was wearing, what he was wearing, where we were standing. We were still standing, though moments later I would be on my back on his couch, his hands on the buttons of my denim shorts.

But when he kissed me the first time, he kissed me, and then pulled back, my face still firmly in his hands. “Kiss me back!” he said, exasperated.

I’d never been kissed. I didn’t know how.

And so it went for everything we did — everything he did to me. I still have to correct my language after twenty years. It wasn’t a consensual affair, though I certainly felt like it was whenever I’d watch him sweeping my long hairs off his bed when he was done. It felt like an affair when he’d cry after and tell me how this was wrong but he loved me so much and we only had to wait a few more years and he would leave his wife.

It felt like I had power when he said he’d kill himself if anyone found out.

It felt like an affair when he shoved me into the bathroom with my clothes that time his wife did come home, and I heard him out there, telling her I’d come over to borrow a CD.

[Is Premarital Sex a Sin?]

It felt like an affair when he spent an hours-long chartered bus ride berating me for being a whore when my crime had been sitting with a fun, flirtatious guy my own age for part of the ride.

It felt like an affair when he came to my house on Valentine’s Day, two weeks after I had finally gotten the strength to say no more, get away, after two and a half years of doing everything imaginable in his home, my home, his church office, hotel rooms. After two and a half years of being isolated from my friends, spiritually and emotionally abused, my life forever altered. I wouldn’t answer the door, but he left roses on the doorstep and then cut through our yard to the truck he’d parked the next street over so no one would see him there.

It took me until college to realize it hadn’t been an affair. I was sitting in a YWCA training seminar to work as an advocate for sexual assault victims, listening to the definitions of rape and consent, when for the first time I put a name to what had happened to me.

I’d thought of it as a twisted relationship, emotionally abusive, but I still would have used the word “affair.” But as things began to untangle in my brain, here’s what I started to wonder:

After an affair, do the guilty parties cut themselves with knives to make tangible sense of their pain? Do they suffer from symptoms of PTSD? Do they have nightmares for the rest of their lives? Every time the phone rings and someone hangs up or — worse — breathes on the other end of the line, do participants in an affair assume it’s that other person, even twenty years later?

Do they startle to the point of tears at a three-year-old’s boo? Do they develop debilitating chronic illness?

Do participants in an affair leave the church for years despite a deep love of Jesus that has somehow miraculously survived? When they finally find the courage to return, do they have a full-fledged panic attack when asked to serve on the church’s vestry? They may have found a church their children love, where they feel mostly safe, but church leaders? They are never safe.

[Previous post on relationships and sex: On God and Sex]

My rapist is still a church leader. He’s still preaching to teenage girls and — I am certain, because I see the pattern now and understand him to be a practiced predator — helping them overcome their body image issues. He met his wife when he was a 20-something volunteer in her high school youth group. He went after another girl before me, who left for college just before that overnight leadership retreat. I was not special.

I have told my story directly to the churches he bounces to. They never believe me, despite the fact that I bring backup, references from therapists I’ve seen, contact information for my peers in the youth group, people still in leadership at that original church. He tells a story when he’s hired of this poor, deluded girl who tells lies about him. And so they choose not to believe me.

Or perhaps they do. Perhaps they believe me but choose to value his redemption over the safety of the girls in their church. I’m guessing they also minimize the gravity of what he did. A fifteen-year old is old enough to say no, isn’t she? Perhaps they see me as complicit, as he must when he is honest with himself, and they extend him the grace that seems so freely given in these situations. But grace comes after repentance. And this man has never admitted a single thing, much less repented.

If he ever does repent fully, then I will have to take a hard look at what I believe about grace and redemption. But for now, while he continues to shepherd young girls to his bed with the blessing of church leaders who ignore my story, I believe he is beyond redemption.

At least I know now that I am not — and that while I am a broken, sinful person, this sin is not mine to bear.

The opinions expressed in this piece belong to the author.

This article originally appeared on onfaith