Theological Abuse: The Problem is Not Mark Driscoll 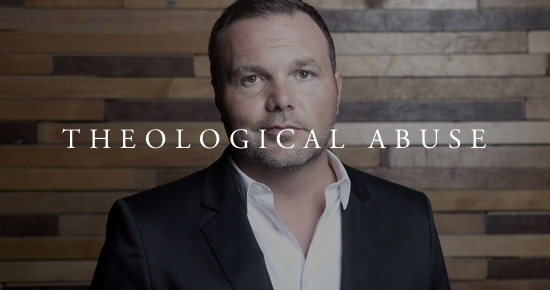 The cycle of theological abuse will not go away, authoritarianism will still exist, it will only be redesigned and eventually re-implemented. Things will change, but they will not get better. Historically speaking this has been an infinite cycle, a perpetuated culture of authoritarian leadership marked by patriarchy, misogyny, and power.

To specifically name the problem, I believe it to be oppressive thought that lesser known “Mark Driscoll’s” buy into, [reformed thought] but not solely limited to.

It should be no surprise that I am one of the millions rejecting Calvinistic and/or reformed doctrine, its just that being in seminary has afforded me the ability and education to put a name and label on this theological malpractice [1].

One look at any one of the reformers writings you’ll quickly see their inexcusably heinous words, take Luther, On the Jews and Their Lies, as an example:

“Let their synagogues be burnt, their houses razed, their prayer books seized, let them be reduced to a condition of agrarian servitude, and-as a “final solution”-let them be expelled from the country.” [Luther, On the Jews and Their Lies]

It really doesn’t take a Princeton degree, or a PhD with a focus on the reformation to see that this theology (orthodoxy or theory) has lead to intolerable malpractice (praxi or orthopraxi) [2].

Though these unfathomable abuses do not stop with Luther. We see Zwingli associated with the drowning Felix Manz for his anabaptist beliefs and re-baptisms[3]. We see John Calvin backing the murder of Michael Servetus for being “anti-trinitartian.” Melanchthon was anti-Semitic[4]. As one can easily see the foundation of the reformation was built on a male dominant Eurocentric thought. It’s a message that says, “If you don’t think, act, or even look like us you’re wrong!” So wrong, that apparently you no longer deserved to exist… but (according to their set of beliefs, burn eternally in hell).

Though burning people at the stake is no longer legal or backed by the state, abuse is still represented in the US protestant church. It’s lead to sexual misconduct in Sovereign Grace Ministries, Vision Forum, Jesus People USA, then there’s the Bill Gothard Ministry. It’s lead to a slew of Christian Universities, cited by Rachel Held Evans, engaging in abuse: Bob Jones University, Patrick Henry College, Pensacola Christian College, and several missions organizations.

Swinging the issue back around to conservative evangelicalism we see organizations and institutions alike that were and still are highly associated with Mars Hill Church and Mark Driscoll. These institutions possess a different variety of authoritarian men who are currently being accused of similar abuses as Driscoll: For instance, James McDonald is said to be overwhelmingly arrogant and dismissive of accountability by fellow elders, Joshua Harris and CJ Maheney allegedly covering up sexual abuse, Dave Ramsey has brought loaded fire arms to work, quasi-pentecostal Steven Furtick manipulating thousands into baptism, Steven Furtick once again later making headlines for purchasing a 1.8 million dollar home, not to mention the Gospel Coalition and Acts 29 Network being associated with Mark, James, Josh, and CJ all the while remaining frighteningly silent on these alleged cases of abuse [5].

Here’s the thing: in the same way I do not wish for their beliefs to restrict others in believing what they want to believe, or how they choose to live, I do not wish for the modern US reformed church to be restricted in what they choose to believe. It’s when basic human rights, and the very lives of people are taken because they are not who you think “God” says they should be, this is worrisome and this is where I draw the line.

The problem is not Mark Driscoll, the problem is theological belief that oppresses other people robbing them of their basic human rights.

“People are mistakenly led to believe that American Christian culture is the same thing as Christ himself.” – Ben Corey

The sad reality within Christianity is that most Christians buy into a set of contextualized traditions and adamantly misattribute them as biblical, absolute truth, or sacrosanct. To be clear, we know what we believe but we fail to acquire any sound reasoning as to why we believe what we believe.

Within Christianity, both catholic and protestant – mainline and evangelical, historicity has shown the agenda has not been that of love but of power. We buy into institutionalized doctrines created by man to perpetuate an agenda. This is exactly why 46% of the US believes Genesis is 100% literal. But whether or not Genesis is literal or figurative is the least of our worries, as it should lie in the shadow of these listed theological abuses.

Instead of being conformed to the comfortable may we step out of our boat and open up to being transformed by the uncomfortable. Educate oneself. Read and listen to both sides of the spectrum. Deconstruct your faith. Ask yourself, “Why do I believe what I believe?” Pick apart your epistemology and gain an understanding of how our environments or experiences shape differing thoughts, interpretations, and/or translations of the bible.

One of the most dangerous things we can do as a society is buy into a doctrine, theology, set of beliefs, or ideology without giving it any due process. Let’s not be ignorant, but instead let’s choose to be educated.

[1] This is not to say that Calvinistic thought is the only problematic doctrine, theology, or systematic ideology. Pentecostalism, Assembly of God denomination, etc.

[2] Examples of this include Patriarchy, racism, and oppression of LGBT communities.

[3] I wonder what Zwingli’s reaction would be to Steven Furtick’s and pentecostalism’s quasi-prosperity driven gospel that’s manipulating hundreds into “rapid-fire” emotionally charged baptisms. The irony…

[4] To be fair, so were all of the reformers. It was part of the cultural norm. Hating the Jewish community then was similar to US southern cultural racism. Which, just means instead of being counter-cultural they morphed into the culture and used scripture to back their hate and disdain.

[5] All pictured above in photo.