Place-Based Practice: or dancing with the one who brung ya

My transition to a localized Place-based practice began when I bumped into someone.

You see, while my childhood relationship with Place had been specific to the farm and its immediate environs, which were geographically contained and local, my adult experience had been shaped like most of us: from books.

When I discovered there was such a thing as “witchcraft” it was a moment of awakening. Learning that others, who practiced the same sorts of charms and healing I had been taught by my grandmother and who shared a world view closely resembling my own, called themselves Witches was a homecoming, and sent me searching for more information.

The problem was that most of that information came from books focused on practices and cosmology originating from a set of islands in the northeast Atlantic!

The places they spoke of had lush green grass in summer, ripening fruits in a season called ‘Autumn‘, and long, dark winters that kept people huddled indoors around a fire. These were foreign concepts to me (though they sounded romantic). Instead, my summers in central Texas were scorched brown, and often stretched from June through October. Gardens ripened in late spring. Winters were mild times that allowed for outdoor fun.

But all the books said Witches honored these new, and strange, seasonal turnings. And wasn’t I a witch?

So, I dutifully learned the language of the Eight-fold year; though it never felt quite right, and I often wondered where the gods and spirits of my own land were.

Fast-forward a few years to my first initiation, which began with a visioning along Barton Creek: the fresh, spring-fed water flowing into Austin, where it merges with the Colorado River.

During that tearful and glorious rite, I met the Quick Silver Girl. She darted into my consciousness, like a flash, as the cold waters of the creek flowed over my naked body.  Barton Creek rushed into my experience, introducing herself to me with laughter and welcoming (even though I had been impolite enough to splash into her sitting-room without so much as a Howdy-Do!).

Here was one of the tutelary spirits of my Place and I had never heard of her! Worse still….for years I had been diligently communicating with, expressing love and gratitude to, a tutelary spirit in….. county Limerick, Ireland!

Talk about not dancing with the one who brung ya!

All those years of living in Austin; eating the produce of her body; drinking her water; walking upon her flesh, and I had never bothered to do more than mention the vague “land spirits” during public ritual! Instead of loving, and being grateful to, the land around me, I had spent all my time trying to build relationship with spirits found on those northeastern islands: the ones I read about in all the books! Oh, how my heart hurt me in that moment.

Thus began my journey: to craft a Place specific practice and mythos; to discover the stories of the Great Powers — Hurricane and Tornado; to learn ‘why’ the Testing of Summer, when all things die; and to sing the songs of the glorious winter, when life rests and is refreshed.

Of course, just when I began to hear their tales… I moved to Ireland.

But that’s another story! 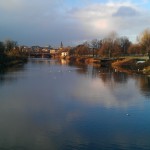 January 4, 2013 Finding the magic
Recent Comments
0 | Leave a Comment
Browse Our Archives
Related posts from A Sense of Place