Living on the ‘Roseline’ and other spiritual fantasies

Living on the ‘Roseline’ and other spiritual fantasies April 29, 2013 Elinor Prędota

A few months ago, I discovered that I live on the ‘Roseline’, the supposed leyline which runs around the globe, through the Gnomon de Saint-Sulpice in Paris, Glastonbury in England, and Rosslyn Chapel near Edinburgh in Scotland.

The only information I can find on the Roseline variously describes it as:

Despite the very recent (late 20th century) association of spiritual powers with the Paris meridian – from demonic to angelic (and the small fact that for a line to go through both Paris and Edinburgh, it would have to miss Glastonbury by a great many miles) many New Agers, whether eclectic white-lighters, Christians, Pagans or others, find great meaning in seeking out and spending time at places along this line.

Some are simply credulous, no doubt, but I am loathe to dismiss completely something that so many people find significant, and which lends order and meaning to their experience of the Universe. In any case, I can hardly cast those kind of aspersions when I myself, in all seriousness, leave out offerings for fey beings, and talk to deities and dead people.

I do so with full knowledge that there is nothing rational or provable about what I do. I simply started acting ‘as if’, and my experiences were interesting and inexplicable enough to provide grounds for my own Unverifiable Personal Gnosis (known to many of us as ‘UPG’). But to anyone who has not shared those kinds of experiences, my dealings with spiritual beings appear to be built on nothing more than fantasy – just like those of Roseline enthusiasts.

One could argue that I am supported by folklore and thousands of years of tradition, not only in these lands, but around the world, whereas those pursuing the spiritual fantasy of the Roseline have a bare 60 years of ‘tradition’ on their side. But is an idea or a practice less valid simply because it is young?

I do have objections to the Roseline as a source of spiritual meaning though, and it is the same objection I have to other New Age ideas which stretch my credulity, such as the idea that aliens built the pyramids and stone circles of the world. It is that it draws attention away from simpler, more direct connection with place.

Part of my practice as a Pagan has been to move away from intellectual abstraction and into physical and emotional embodiment in my spirituality. To look to the sacredness or specialness of a place in its association with a line on the ground, or its putative construction by aliens, or any other such fantasy, is an imaginal overlay, which hides the very real sacredness and specialness that exists in that place simply in its physicality, its history and its visceral effect on us as human beings.

My own spiritual fantasy of communicating with spiritual beings brings me into closer connection with place as it is, with all its layers of life. I am sure there are some for whom spiritual fantasies such as the Roseline, or alien monument construction, serves a similar function. But I fear that for many more, these fantasies, which bring spiritual attention away from a place itself and onto an idea about a place, only serve to separate us further from place, to keep spirituality out of the body and safely in the head. 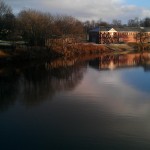 April 30, 2013 Exploring Place Through Fiction
Recent Comments
0 | Leave a Comment
Browse Our Archives
get the latest from
Pagan
Sign up for our newsletter
POPULAR AT PATHEOS Pagan
1